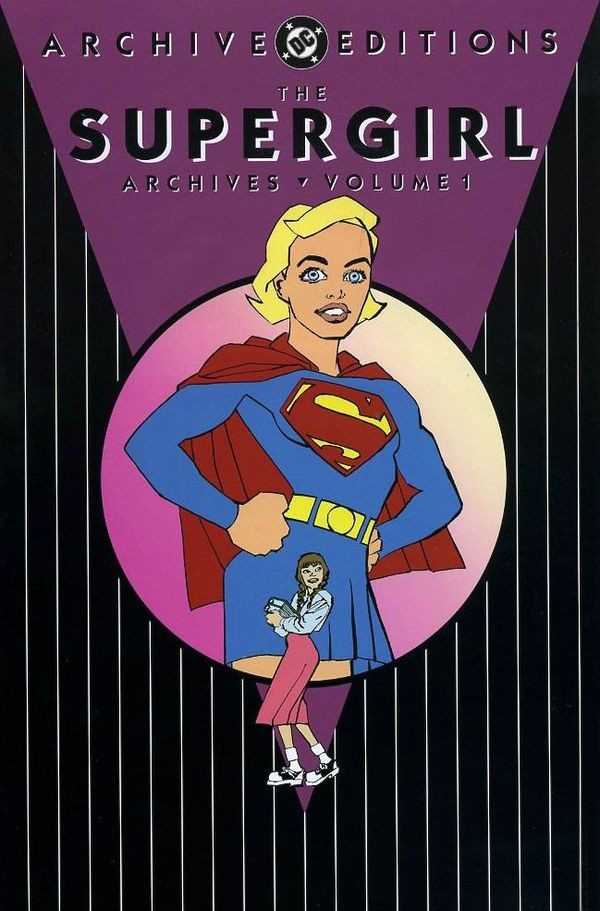 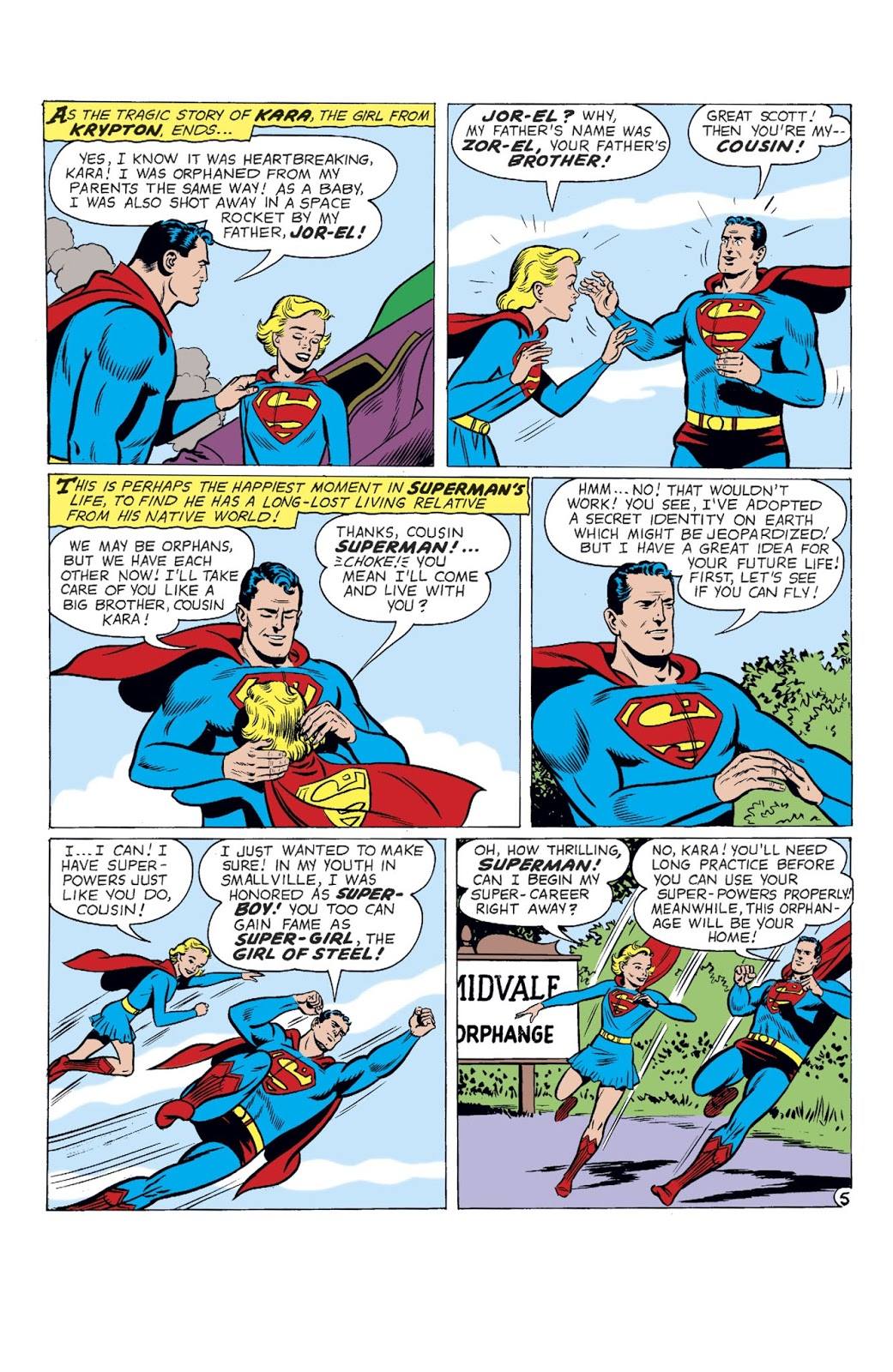 Modern superhero titles concentrate on turmoil, angst and spectacle, and sometimes the palate craves a different flavour. It’s provided by this hardcover collection of the Maid of Steel’s earliest adventures.

Even avid Supergirl fans might not know about her prototype, thoughtfully included as the opener. 1958 try-out story ‘The Three Magic Wishes’ by Otto Binder and Dick Sprang tells how a mystic totem briefly conjures up a young girl with super powers as one of three wishes made by Jimmy Olsen.

Such was the reaction that within a year ‘The Supergirl from Krypton!’ introduced Superman’s cousin Kara, born on a city-sized fragment of Krypton, hurled intact into space when the planet exploded. Eventually Argo City turned to Kryptonite, and Kara’s dying parents sent their daughter to safety as they perished. Landing on Earth, she meets Superman, who creates the cover-identity of Linda Lee and hides her in Midvale orphanage, where she learns about her new world and powers in secrecy and safety. This groundbreaking tale was also by Binder and drawn by the hugely talented Al Plastino.

In ‘The Secret of the Super-Orphan!’, she makes the acquaintance of fellow orphan Dick Wilson (eventually Malverne) who became her recurring romantic entanglement, suspecting she has a secret. Romance features heavily and Supergirl/Kara/Linda frequently meets other potential boyfriends, while many early tales also involved keeping her presence concealed, even when performing super-feats. Jim Mooney becomes regular artist and Binder remains as chief scripter for most of this early run.

‘Supergirl’s Foster-Parents!’, sees an unscrupulous couple of con-artists easily foiled, after which Linda meets a mystery DC hero when ‘Supergirl Visits the 21st Century!’ Her secret is almost exposed in ‘The Great Supergirl Mirage!’ before she grants ‘The Three Magic Wishes!’ to despondent youngsters and teaches a bully a much-needed lesson.

The Man of Steel often comes off poorly when dealing with women in those less enlightened days, always under the guise of “teaching a much-needed lesson” or “testing” someone. When Supergirl plays with Krypto, ignoring his secrecy decree, cousin Kal-El banishes her to an asteroid in ‘Supergirl’s Farewell to Earth!’, but of course there’s paternalistic method in the madness. ‘The Cave-Girl of Steel!’ sees her voyage to the ancient past, before she’s transformed by the mystical Fountain of Youth into ‘The Girl Superbaby!’

The next tale introduces feline fan-favourite Streaky the Super-Cat in ‘Supergirl’s Super Pet!’ after which ‘Supergirl’s Greatest Victory!’ delivers a salutary lesson in humility. Binder moved on after scripting ‘Supergirl’s Darkest Day!’ in which the Maid of Might rescues an alien prince, after which Jerry Siegel writes ‘Supergirl Gets Adopted!’: a traumatic and sentimental tale ending with the lonely lass back at Midvale orphanage.

‘When Supergirl Revealed Herself!’ isn’t what you think, but another story about nearly finding a family, after which Streaky returns in ‘The World’s Mightiest Cat!’ Supergirl narrowly fails to qualify for the Legion of Super Heroes through the cruellest quirk of fate in ‘The Three Super-Heroes!’. Picking herself up she then exposes ‘The Mystery Supergirl!’

Possibly the last time a female super-character’s sexual allure wasn’t gratuitously exploited, these exciting, ingenious and utterly bemusing tales are a link to a less crass time. They display a strong and resilient female character parents can still happily share with even their youngest children.

These stories are also found in black and white starting Showcase Presents Supergirl, and the first volume of Supergirl: The Silver Age, is a subsequent colour reprint in paperback, also including the content of Supergirl Archives Volume 2. 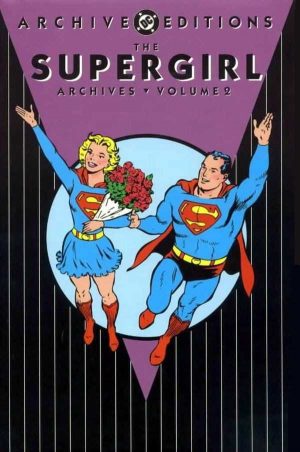 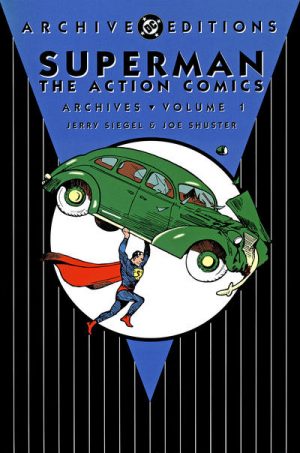