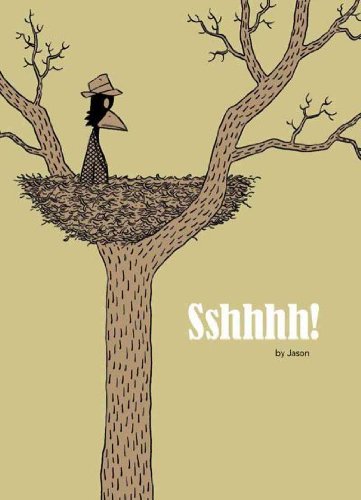 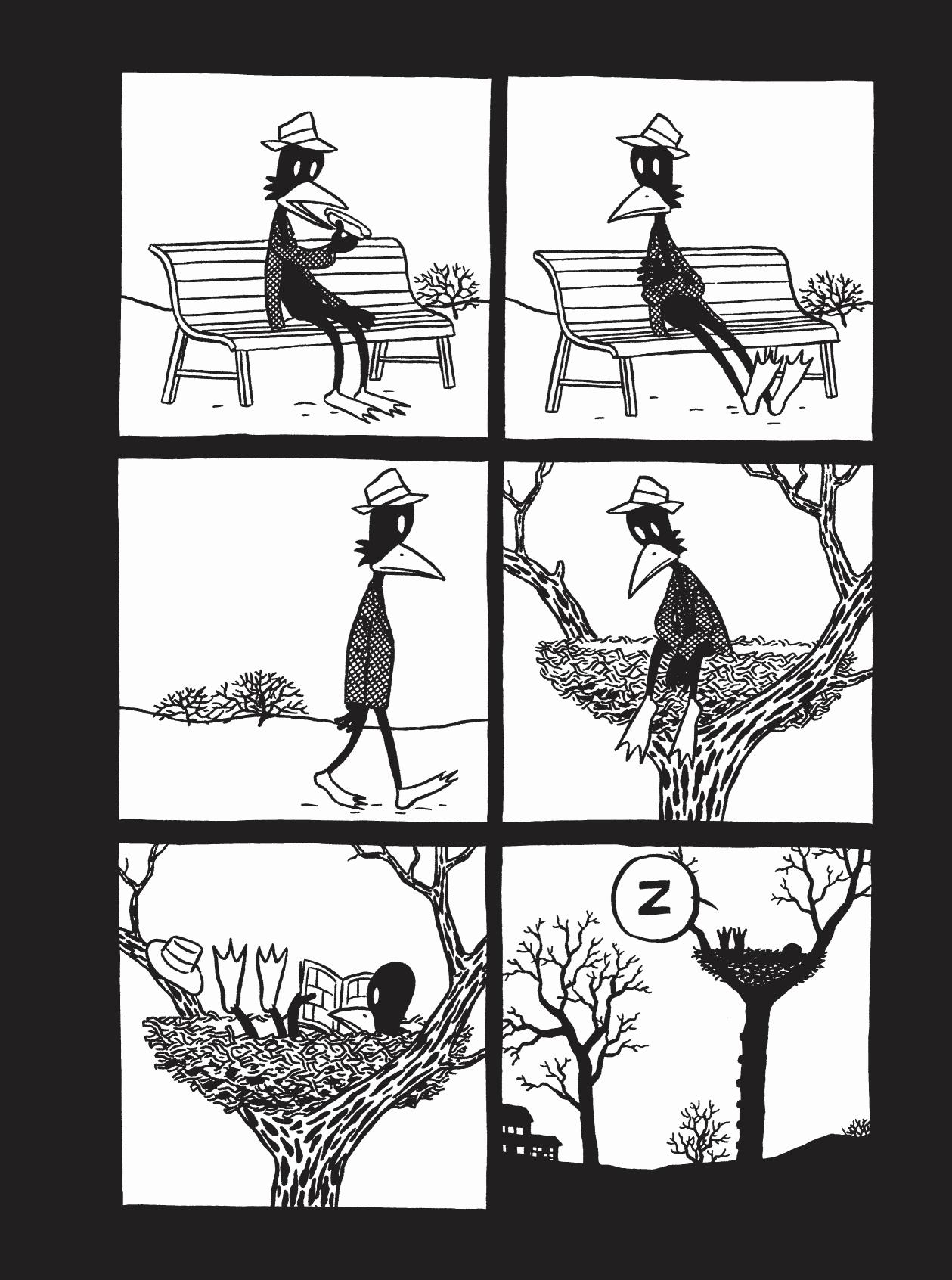 Even by Jason’s admirable standards of eccentricity Sshhhh! is a strange graphic novel, possibly the strangest of his career, although created relatively early. His output regularly switches genre, and this is his step into surreal melancholia, a collection of stories about how life can go wrong.

Ten vaguely connected chapters follow what at the start is a lonely and unfulfilled man, or bird man in Jason’s typical anthropomorphic style. Perhaps no definitive explanation for his experiences exists, and it’s just a matter of being sucked into the flow as each chapter extends his mystery in a succession of increasingly bizarre obstacles to his finding happiness. Relationships are thwarted by death, the alpha male, disappearance, and incompatibility. He turns invisible, reverses time… The list is as inventive as the content, the only real certainty being our protagonist striking out again. He’s largely without expression no matter his circumstances, so recalling Buster Keaton’s stoic cinematic persona, an impression strengthened by the stories being dialogue free. The longest of them, the fifth, is a manic montage succession of alternatives, immediately followed by the tale of the protagonist becoming invisible. This is the one chapter that could be construed as social commentary, as life goes on around him, but no one notices him. Some panels are played for laughs – the invisible man holding an umbrella – but in keeping with the remainder of the stories, once he decides to exploit his circumstances, they desert him.

In the later stages crime features, and the final two chapters are the shortest of all, each clocking in at a mere five pages. If there’s a strip that sums up Jason in all his whimsical joy it’s the ninth, in which our protagonist discovers that by just turning the hands on a large clock he’s also turning time backward or forward with the appropriate effects on his age. Having first made himself older, then taken his body back to childhood, the man restores time to its usual setting, and his response is to take the clock out and destroy it. For all that Jason’s an expert at putting his characters through wrenching change, it seems the status quo is the preferable option.

Is Jason an acquired taste? Some seem to think so, yet there’s a straightforward simplicity about his visuals, and his stories are generally easy to follow, although there is the exception of that fifth chapter here, and they’re almost always thought-provoking in some fashion and always entertain. This site features a genre search option on the reviews page, and it’s fair bet that no other creator reviewed on the site has ticked as many of them as Jason, and there have been very few disappointments along the way. It all indicates a constantly engaging creator whose acclaim is justified. Sshhhh! is now more easily found as part of the hardcover collection What I Did.