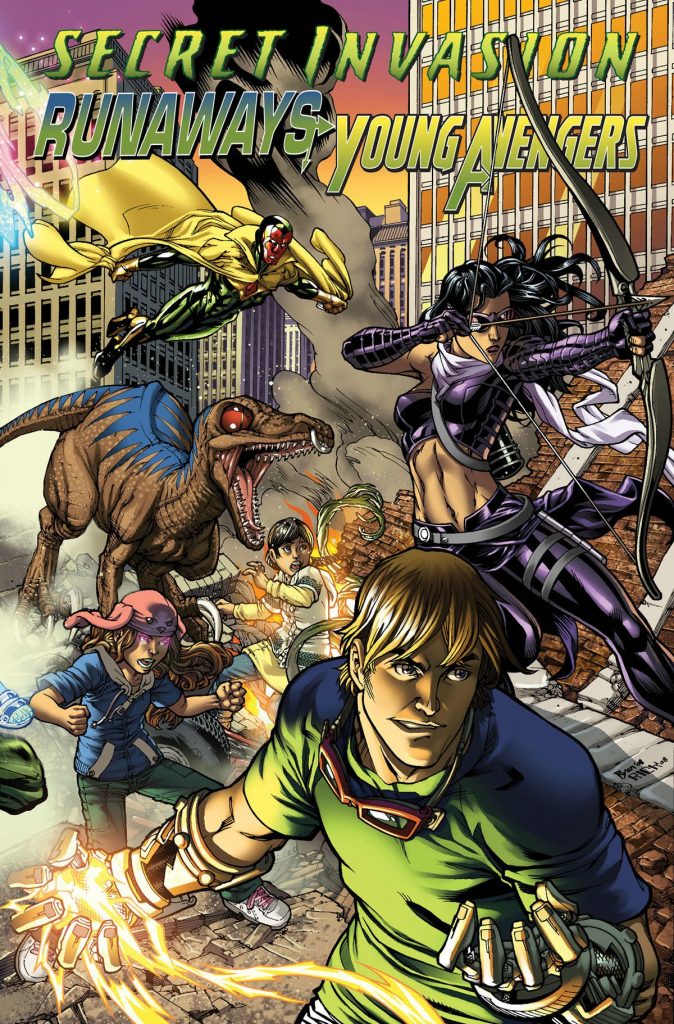 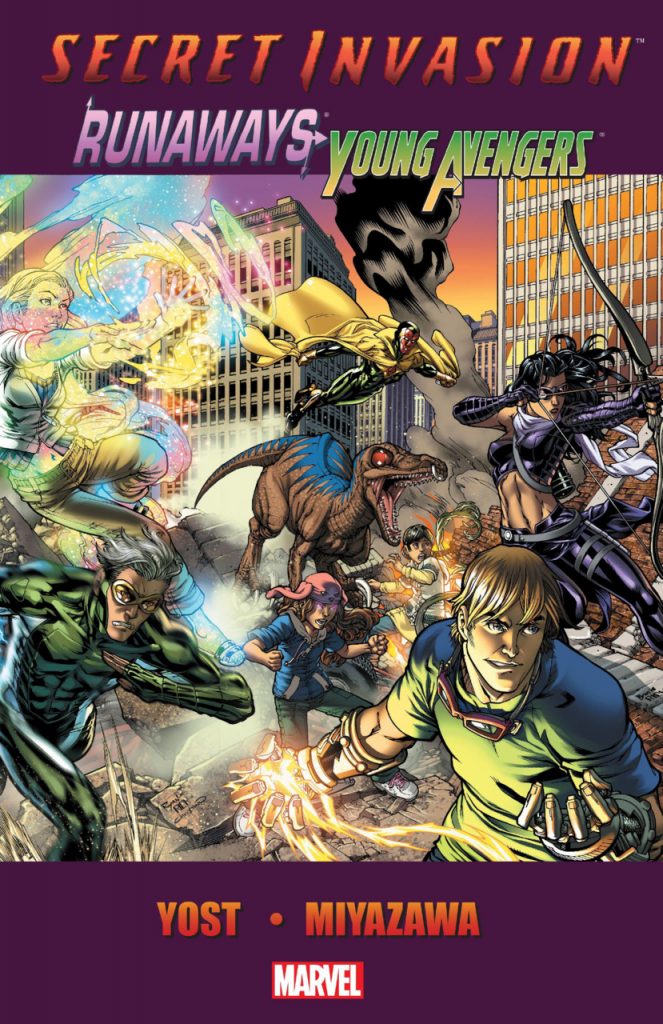 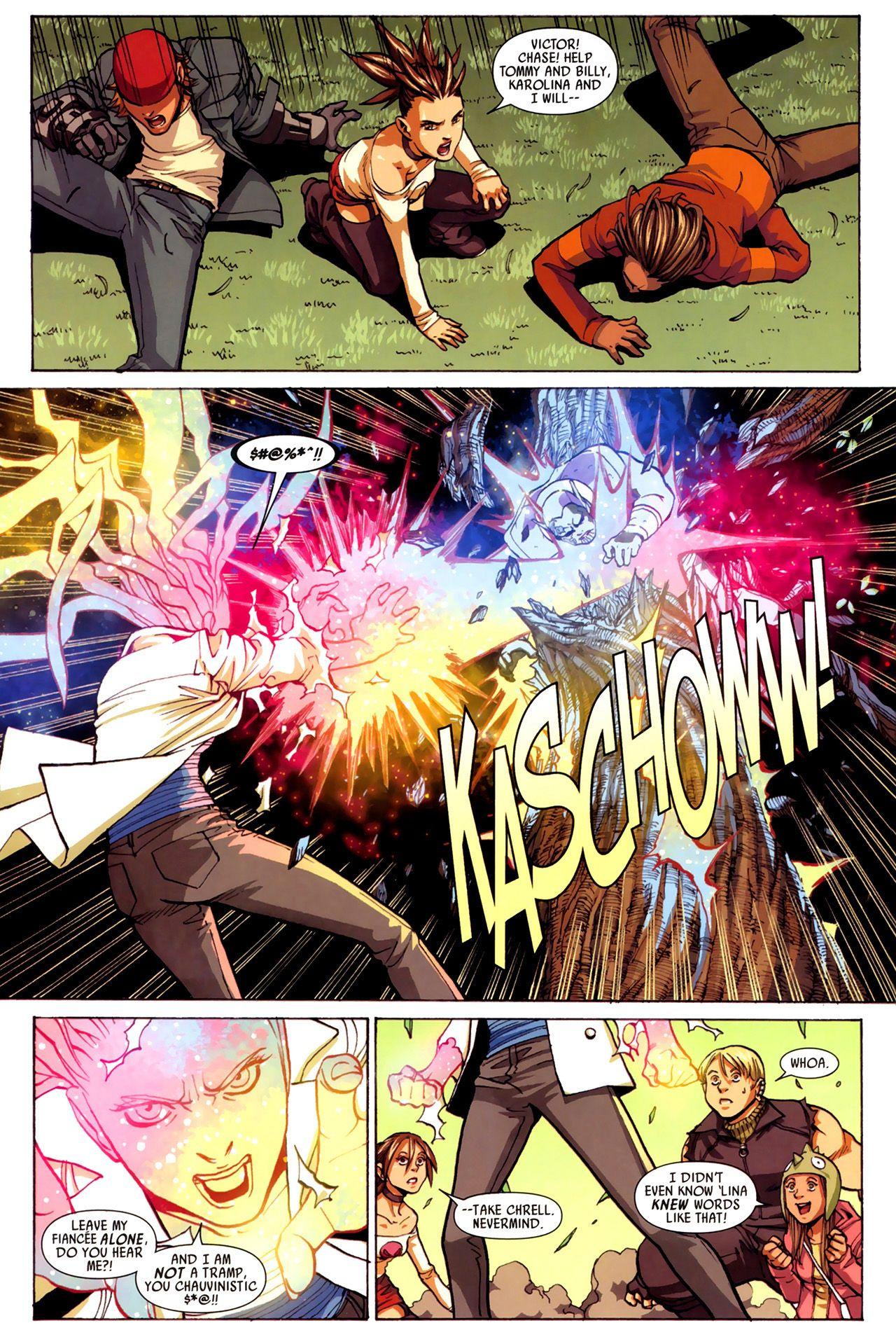 Crossing into every single Marvel title, the premise of Secret Invasion was that shapeshifting alien Skrulls had long impersonated significant humans on Earth, and were now effecting a full scale invasion. With public feelings and suspicion running high, now was not the time to have a Skrull on your team. Both the Runaways and the Young Avengers do. In terms of continuity, the Young Avengers were between series, and this follows Dead End Kids for the Runaways.

The Skrulls attacking Earth have a great belief in prophecy, and among them is one that considers Hulkling of the Young Avengers to be the saviour of the Skrull Empire. On the other hand, they also believe all super powered beings on Earth to be abominations to be killed, something Xavin of the Runaways is all too aware of. The plot centres on these two characters and their awareness of Skrull attitudes, prophesies and likely responses. However, they’re equally known to the Skrulls, which places them in great danger.

Takeshi Miyazawa brings a manga style of illustration to the cast, with plenty of speed lines and massive eyes and beads of sweat. He also draws most of them far younger than they’re supposed to look. It’s mentioned that Karolina is due to be married, yet she looks around twelve, which is disturbing, although when it comes to Molly and Klara the art’s pitched just right. Miyazawa isn’t great on populating his backgrounds either. The Runaways look to have the streets of New York to themselves in the opening pages. The better aspects of the art are good senses of layouts and storytelling. He also delivers a glorious final page.

Chris Yost’s brief appears to have been to feed into the bigger picture of Secret Invasion without affecting anything fundamental, and he works okay with that. The interaction between Hulking and Xavin is credible, as are the flashback scenes on the Skrull homeworld, but beyond that nearly all the content is one long chase scene interspersed with fights. That’s the purpose of a superhero graphic novel, but they never really have the intended impact.

Consideing that, and that this is an extremely short graphic novel, padded out with a comprehensive package of information pages concerning both teams, you might consider the third Runaways: Complete Collection better value. It contains this, the earlier meeting of the teams during Civil War, and a dozen Runaways issues. The Runaways continue with Dead Wrong, and the Young Avengers would eventually pick up a new series beginning with Style>Substance.