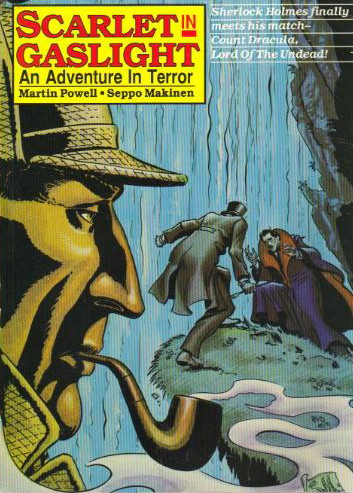 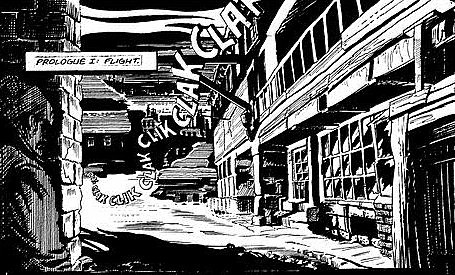 Writers and fans alike share an oddly perverse and seemingly overwhelming desire to mix and match their favourite heroic or literary figures. That’s especially true of the Victorian Era; birthplace of so many icons and facets of popular culture. Sherlock Holmes is so much a household name that his inclusion in any venture is a virtual guarantee of commercial success, but sadly often no guarantee of quality.

Mercifully that’s not the case in this instance. This slim black and white volume by writer Martin Powell and illustrator Seppo Makinen collects an intriguing case which marries the two greatest fictional icons of that moody period of phenomenal creativity.

The case involves a deliciously slow-paced, understated yet intrinsically intriguing battle of wits between the Great Detective and Bram Stoker’s Lord of the Undead. The teaming of Holmes and Abraham Van Helsing is a purist’s delight whilst the uneasy alliance of Count Dracula and the more honestly evil Professor Moriarty, as much as its dramatic severance, delivers a memorable thrill for neophytes and purists alike.

The creative team reunited for the sequel A Case of Blind Fear, guest starring H.G. Wells’ Invisible Man, and in later years Makinen has become a key producer of Holmesian tales.

Far more than a mere pastiche or cheap cashing-in exercise, Scarlet in Gaslight is a sound and solid pairing offering enough suspense, thrills and chills to satisfy even the most discerning book fiend or comics aficionado.