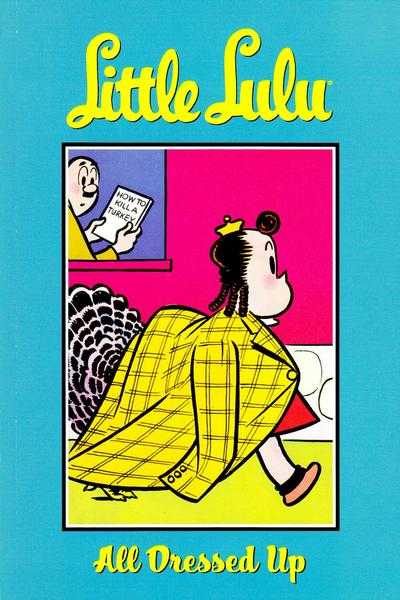 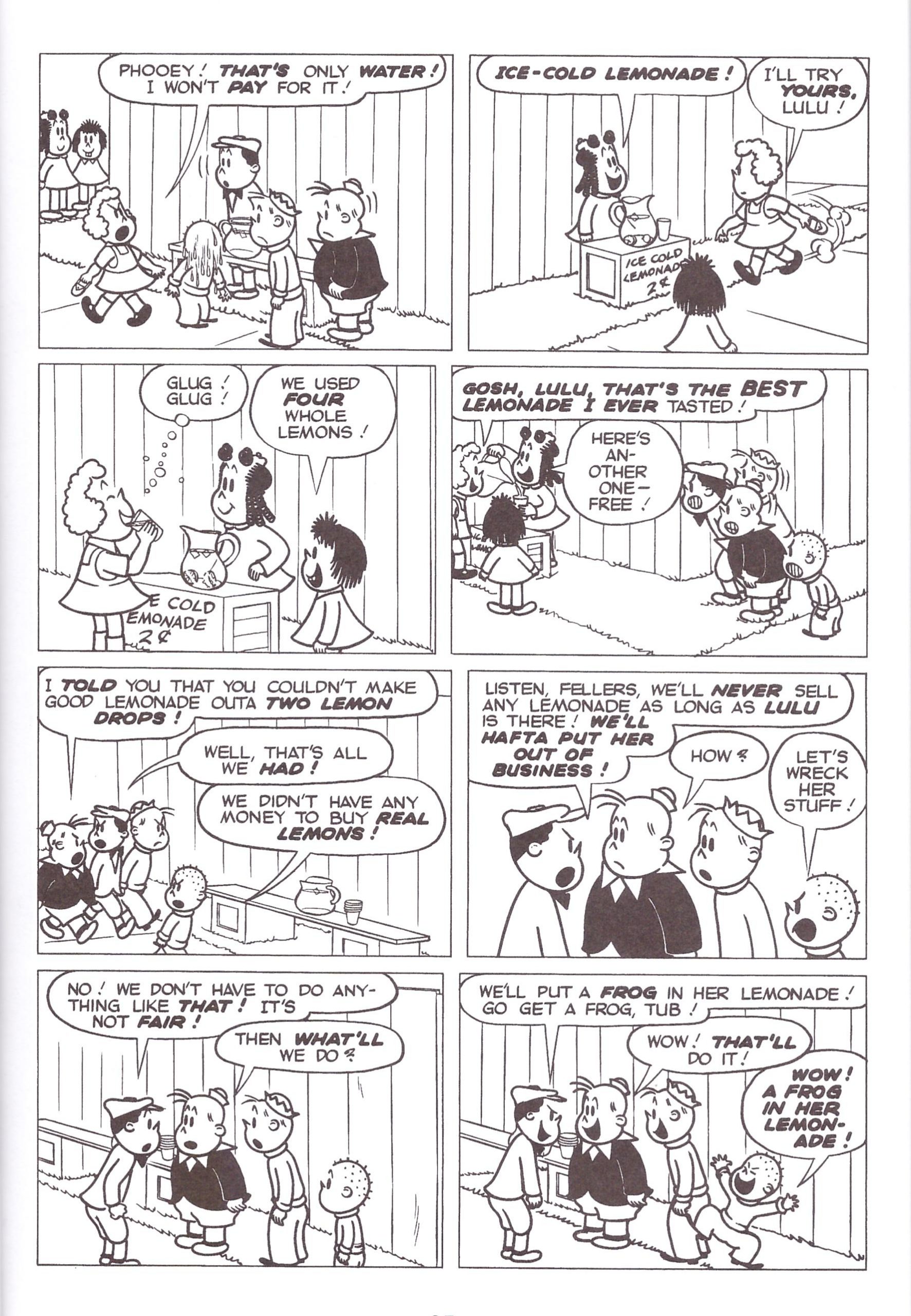 Will the boys ignore Lulu when it comes to sending out dance invitations? Will Lulu fall for Tubby’s surprise invitation to join the previously boys only club? Will Witch Hazel torment the poor little girl? The answers to those questions are yes, yes and yes again. However what’s important is not how Lulu is tricked, but the constantly smart way she gets even.

All Dressed Up supplies another fifteen funny stories starring Lulu from the smooth storytelling machine of John Stanley and Irving Tripp, and the five Tubby solo strips are equally good. There’s everything wanted from a Lulu collection: great art; Tubby and his Junior Detective kit pinning a crime on Mr Moppet; that little pest Alvin being told three inventive stories of the poor little girl; Mr Googins the constantly frustrated truant officer, and all the local kids. The awful Witch Hazel is only seen on two pages, but when the laughs and ingenuity of the remainder sets the quality level so high, any disappointment is muted.

That quality is evident from what are often throwaway ideas, such as a freight wagon full of yo-yo’s, as Stanley, also an artist, conceives visually, leaving Tripp to define the comical results. A Tubby solo story is set around his discovering a new screeching sound from his violin so frightful it literally curls the hair of anyone in the vicinity.

Opening strip ‘Five Little Babies’ is among the most highly regarded Little Lulu stories, with her being humiliated by Wilbur Van Snobbe as a condition of his being able to join the boys’ club. The usually astute Lulu being led around on all fours by a dog lead is a painful sight, but Stanley devises an equally cruel revenge, fittingly not just on Wilbur, but the remainder of the boys also. Lulu fans will know this story back to front, but it’s a real treat read for the first time.

Stanley’s constant ability to mine variety from very similar circumstances again and again is astounding. It’s taken for granted that Carl Barks will have Huey, Dewey and Louie outwit Donald Duck, but they do that in all kinds of different scenarios. In Stanley’s stories he’s not only locked in by mischief, but by other personality traits. Gloria’s vanity will always be her downfall, and Wilbur may have access to money, but that doesn’t trump being smart, even in one of the ‘imaginary’ stories as told to Alvin. Lulu outwitting Witch Hazel or Mr Goggins is more along the lines of Huey, Dewey and Louie, as it’s different every time, but stories of Tubby playing detective require the culprit always having to be Mr Moppet, Tubby’s absolute certainty of that always a delight. This junior detective story features a strange lapse, though. Given the ultimate revelation there’s surely no way Lulu would have been spanked in the first place.

The spanking is an aspect nailing the times, now at least frowned on in most places, and illegal in some. Likewise, kids out unaccompanied all day as Tubby and his mates are would today generate a visit from social services, and the football uniforms make for a great joke, but offer the protection of the 1950s. No kid should really care about these anomalies when the remainder is so finely crafted and still provides so much fun and so many laughs.

Beyond the gradual introduction of new characters over the early books, there’s no continuity to Lulu, so the books can be read in any order, but the chronological presentation continues with April Fools.