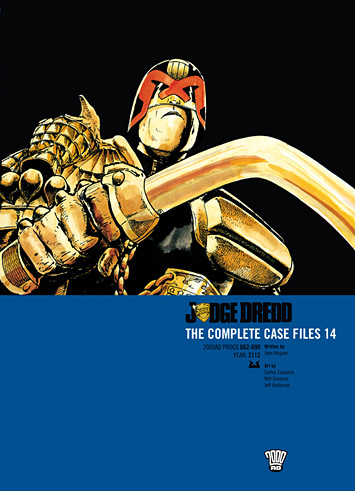 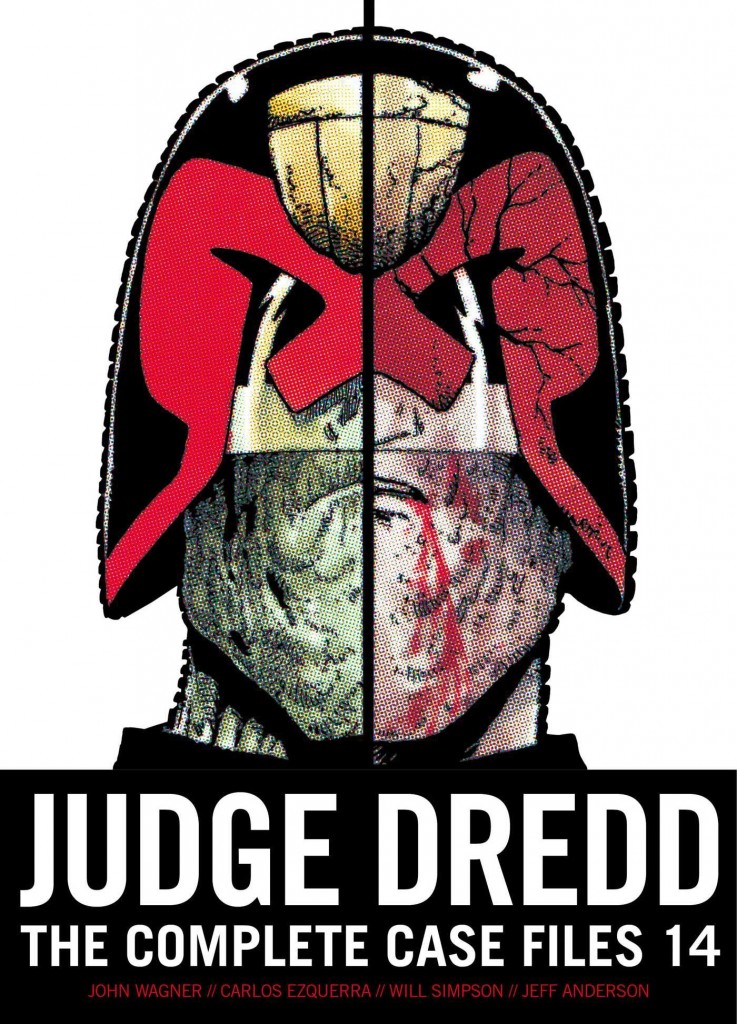 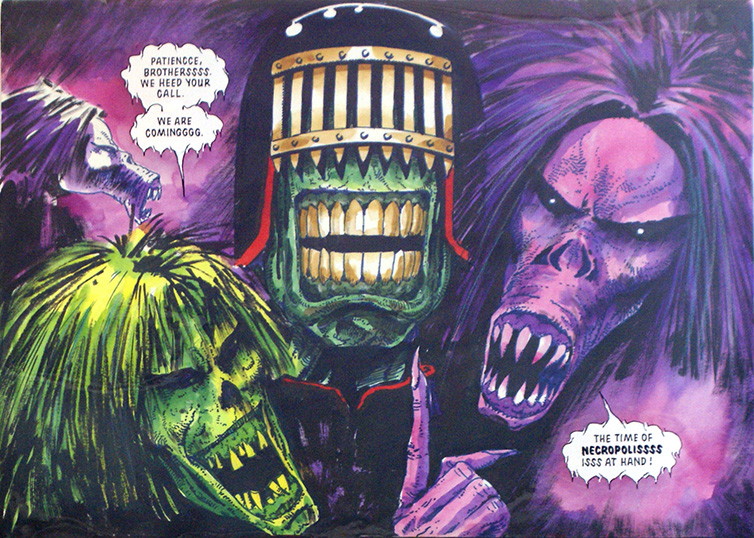 Case Files 14, written entirely by John Wagner, contains the epic ‘Necropolis’ story, and the events leading up to it, also available as a separate graphic novel. A weakness of collections like this – especially when they claim to be complete – is that the story leading into ‘Necropolis’, The Dead Man, didn’t appear in 2000AD as a Judge Dredd story and so isn’t included here.

We begin instead with Dredd in the Cursed Earth, and flashback to the events that led him here: going out on the streets with Kraken, his clone-brother and eventual replacement, and the death of Morphy, Dredd’s mentor. Combined with doubts Dredd had long been having about the Judge system, this was enough to force him to take the Long Walk into the Cursed Earth.

We catch up with the present as Dredd and his mutant companion encounter ex-Chief Judge McGruder, who’d also taken the Long Walk, then head to Mega-City One, where they discover a ragged bunch of cadets led by the young Judge Giant. They rescue a seriously injured Cassandra Anderson, and work together to bring down someone who’d already considerably harmed Dredd.

This story contains many interesting and bold plot choices, like retiring and replacing Dredd. And the eventual reveal of the Dead Man’s identity had been truly shocking. However, most of the story is epic in terms of length alone. Overstretched, and treading a lot of ground that feels familiar from earlier multi-part stories such as the far superior ‘Armageddon Wars’, this also commits the crime of the main threat not being that terrifying or even well designed. Phobia and Nausea are effectively indistinguishable, which stands in sharp contrast to the strikingly unique designs Brian Bolland created for Judges Death, Fire, Fear and Mortis. Death and his cronies feature in this story, but not as much as one would expect, as little more than supporting characters.

Jeff Anderson’s artwork, while displaying real skill on some panels, is very stiff. Will Simpson, who had co-pencilled the aforementioned The Dead Man, does a far better job, and his style perfectly suits the darker, almost hallucinogenic, feel of the episodes he illustrates.

Carlos Ezquerra co-created Dredd with Wagner, and is responsible for the bulk of the art, drawing the entire 25-parts of ‘Necropolis’ as well as much of the stuff leading into it. Ezquerra was a great artist once, and flashes of that are still evident in his work, with dramatic layouts and dynamic poses aplenty, but there’s no denying that he’s phoned in much of this. A great deal of his work here looks rushed, and there are some panels where it appears he just plain forgot to colour or finish something. However, at least he hadn’t yet discovered the joys of colouring on Photoshop, because when he does the results are not good.

In its favour, it’s always nice when these multi-part stories are handled by one artist (and even when he’s not trying, Ezquerra’s stuff still looks like classic Dredd) as it gives a cohesiveness that stories split over assorted artists don’t always have. Sadly, apart from a few nice touches, this tale just doesn’t rate with other Judge Dredd epics.