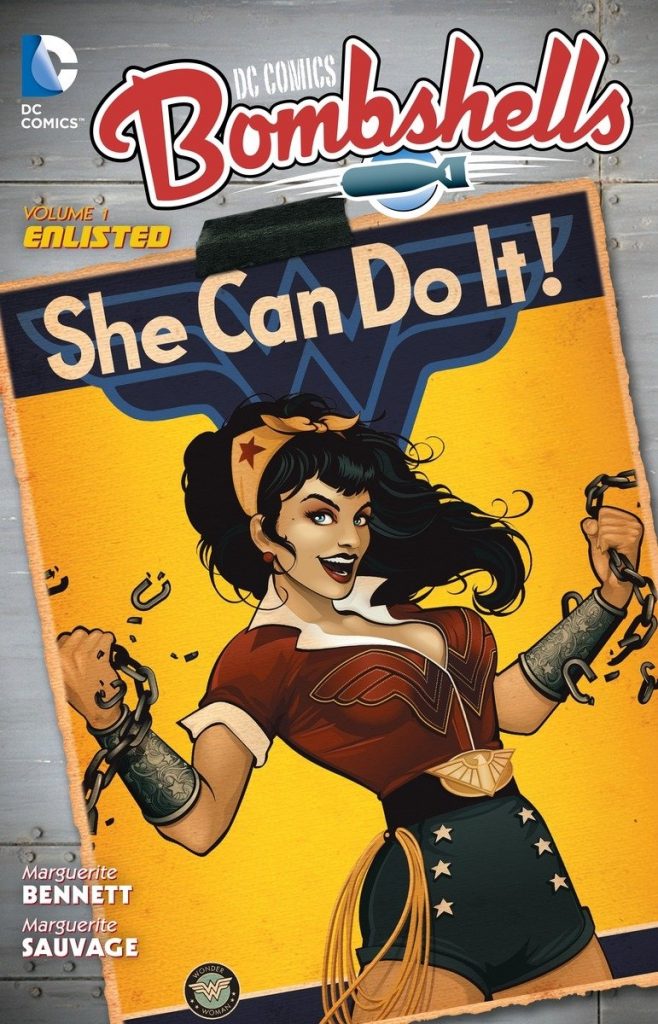 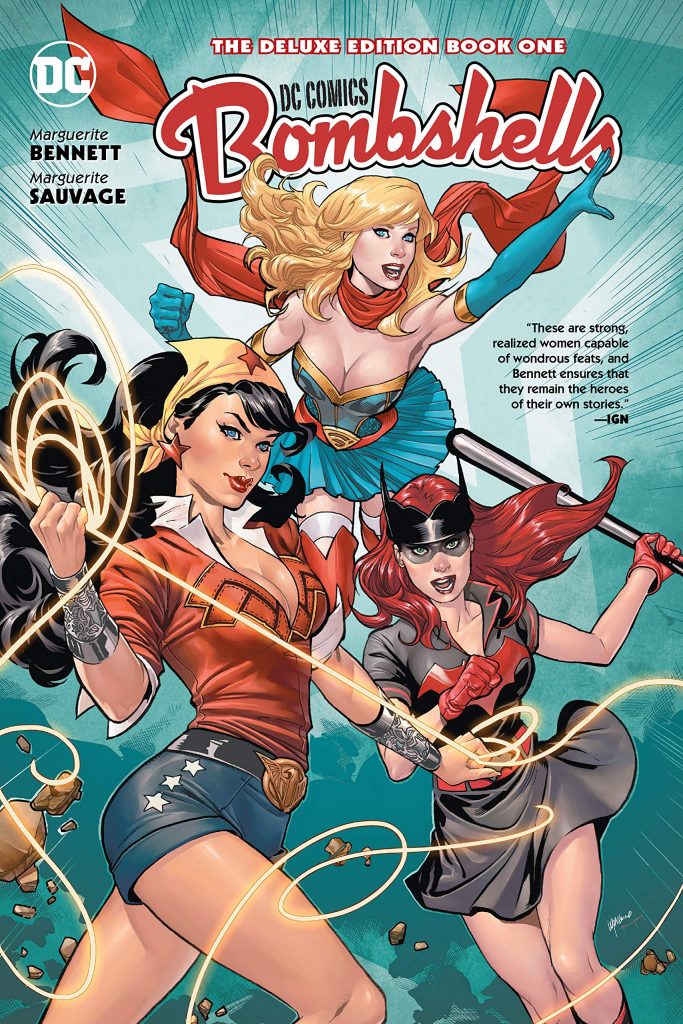 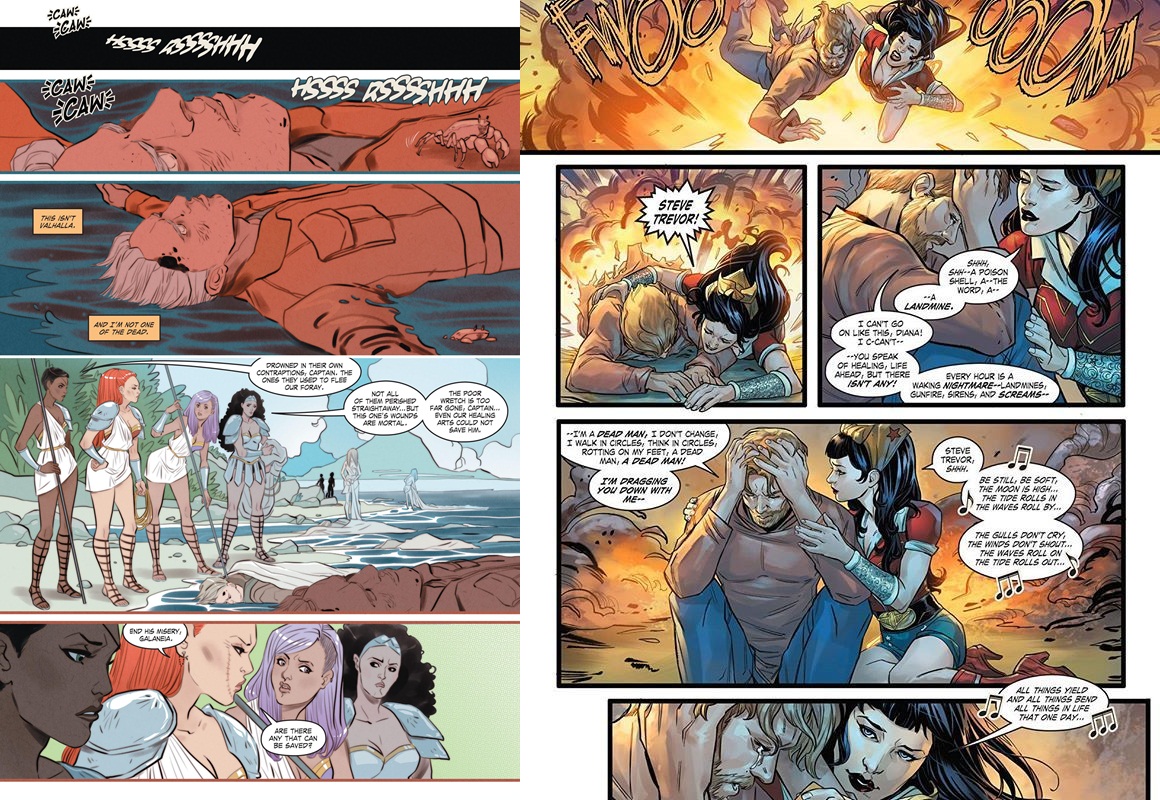 DC Comics Bombshells has quite the exotic origin, founded on Art Lucia’s idea of re-envisaging DC’s superhero women as if 1940s pin-up illustrations of the types painted on warplanes. It led to a series of statues before being trialled as a strip on DC’s website, where it became the longest running feature to date, amassing enough material to fill six trade paperbacks. Enlisted is the first.

Marguerite Bennett takes the 1940s theme and runs with it, but she doesn’t just focus on the USA, and changes some of the heroines to better suit her multicultural vision, while keeping others much as they are in the primary DC universe. So there’s a lesbian Batwoman in a relationship with police captain Maggie Sawyer, but Supergirl is Russian and has been part of their Night Witches flying squadron, and Zatanna appears in Berlin cabaret. These are thoughtful recastings offering a sense of the exotic and also intrigue. It’s Wonder Woman who receives the greatest attention, with fighter pilot Steve Trevor washing up on the Amazons’ island and thereafter events following the course of Wonder Woman’s familiar origin, but altered enough to maintain suspense, and involving Mera from Atlantis.

In keeping with the theme, DC ensured that in addition to Bennett’s writing, far more often than not a woman also drew the strips, and Wendy Brown is the regular colourist. Marguerite Sauvage, Laura Braga, Mirka Andolfo, Bilquis Evely, and Ming Doyle, all draw more than a single chapter, and they’re all very good. Sauvage (sample art left) has a more ornate style, while Braga (sample art right) produces traditional superhero layouts and viewpoints, but in superior fashion, and they set the ball rolling. Of the male artists it’s Stephen Mooney who stands out, varying a Supergirl chapter to incorporate Russian book illustration stylings for her background story. Garry Brown and Ted Naifeh aren’t as distinctive, but Naifeh in particular is suited to the more horror oriented material he’s given. There are times when the web comic origins are apparent, however. When published online, every half page of the printed version is a web segment, so it’s rare that the layout departs from two tiers of panels.

Bennett is plotting for the long term, which makes Enlisted episodic, switching to different characters and changing the mood with every new chapter. By the end of the book we’ve been introduced to Batwoman, Catwoman, Harley Quinn, Huntress, Joker’s Daughter, Mera, Poison Ivy, Amanda Waller, Stargirl, Supergirl, Wonder Woman, and Zatanna, with more to come, but few of them have met more than one other. It’s unusual to see a superhero comic plotted as a complete novel in the manner of some Vertigo series, but it’s also very satisfying for anyone not fixated on a single canonical version of, say, Supergirl. It’s been well researched, and includes many thoughtful small moments. One that sticks in the memory is Wonder Woman and Steve Trevor sailing away from Thermiscyra and over a page discussing their societies’ names for star clusters, with Bennett conceiving alternate versions for the Amazons.

The overall priority is fun, and fun is what’s provided. The series continues with Allies. The continuing success has led to the reissue of this content in hardcover as DC Comics Bombshells: The Deluxe Edition Book One. 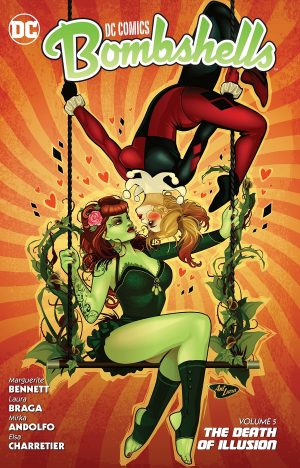