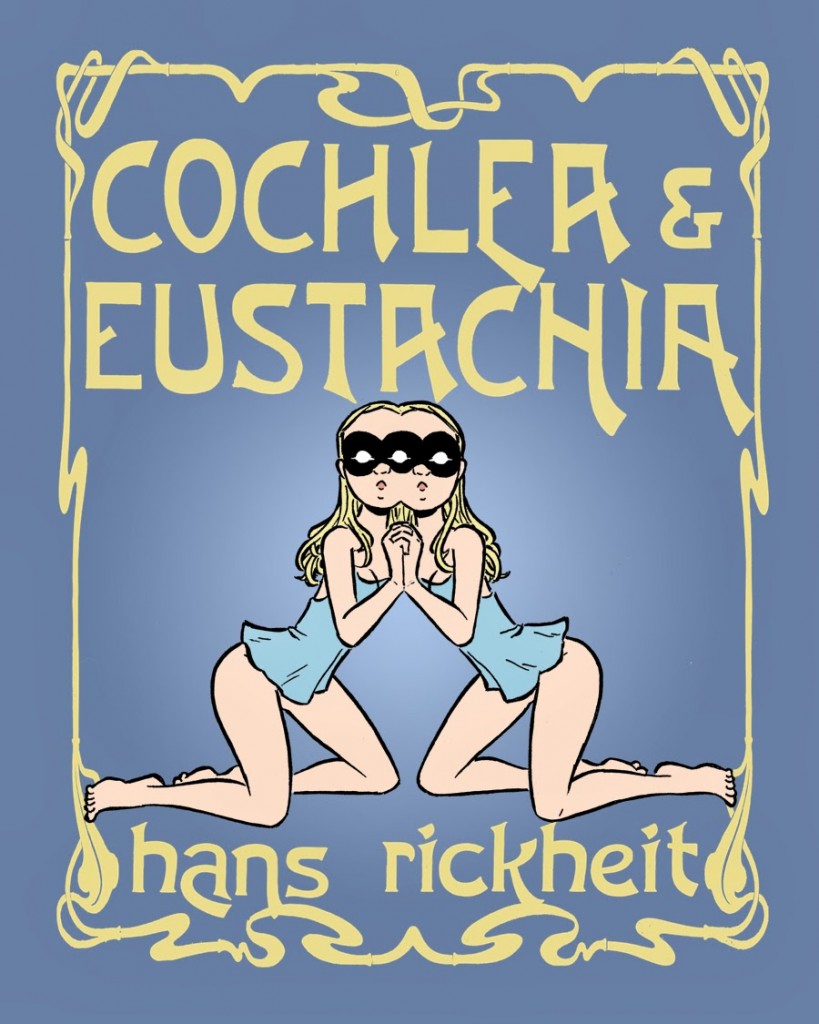 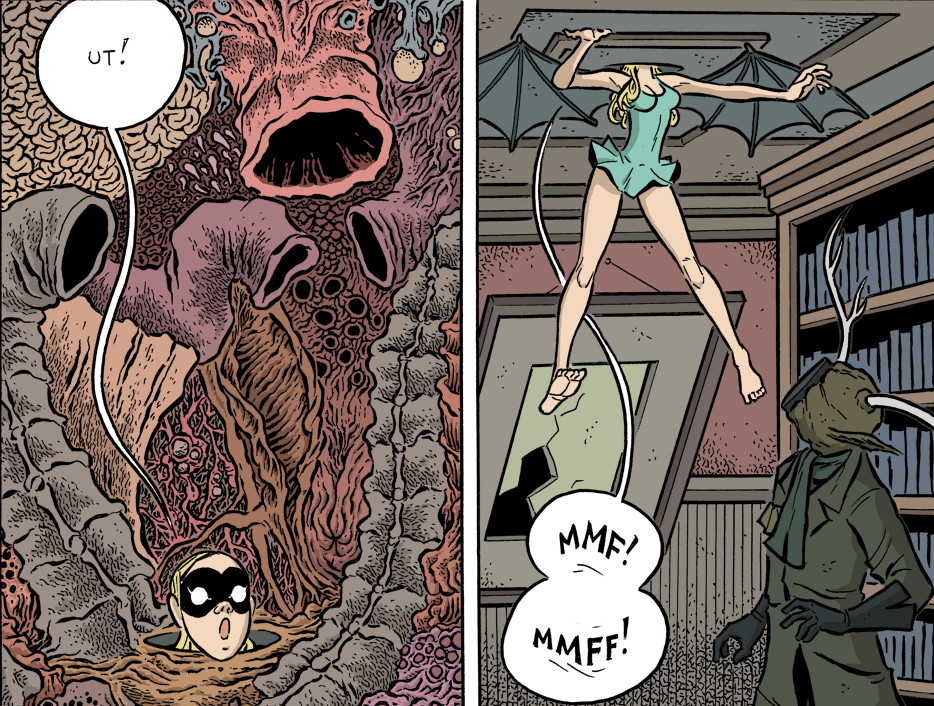 Hans Rickheit has been producing skilfully crafted art in many different arenas since the 1990s, beginning with self-published mini-comics before graduating to full-sized, full-length epics such as Kill, Kill, Kill and The Squirrel Machine. He has also worked in film, music, gallery installations and performance art.

A Xeric award beneficiary, he came to broader attention in 2001 with the controversial graphic novel Chloe, and has since spread himself wide contributing to numerous anthologies and periodicals, creating beguiling webcomics and instigating the occasional anthology or minicomic of his own such as Chrome Fetus.

That last was the original venue for the strangely surreal binary sorority known as Cochlea & Eustachia, and they’ve manifested in many other venues since, most recently destructively scurrying through Rickheit’s webcomic pages. Their distracting blend of ingénue iconoclasm and chaos now inflicted through the printed page of this splendidly olde worlde graphic compilation.

A keen student of dreams, Rickheit has been called obscurantist, and indeed in all his beautifully rendered and realised concoctions meaning is layered and open to wide interpretation. His preferred oeuvre is recondite imagery and sturdily fanciful milieus of Victorian/Edwardian Americana which proved such rich earth for fantasists like Poe, Lovecraft, Clark Ashton Smith and August Derleth, whilst his fine, studied, meticulously clear line is a perfect, incisive counterpoint to the frequently challenging logic-bending of miasmic mystery and cosmic confusion. Therefore pay attention, scrutinise carefully and make up your own mind.

In a shabby, battered manse peculiar contraptions and bizarre trophies of things that should never have existed – let alone be stuffed and mounted – proliferate. The master of the house is another strange creature and as he awakes from a unique bier and wanders about his domain, unseen and undetected wanton mischief makers Cochlea and Eustachia rouse also and resume their apparently aimless peregrinations through the walls, nooks and crannies of the edifice which rests atop a sea of animal skulls. The nubile, girl-like creatures scutter about in dream-like journeys and progressions, avoiding and yet stalking the wheelchair bound savant as he continues his labours, cultivating creatures of incomprehensible oddity.

Soon chances occur for more manufactured calamity and wildly sedate chases ensue, resulting in capture, shocking indignity and a clash with monsters and giant robots, but as the episode escalates we are left to wonder are the elfin wanderers a binary or in fact trinary partnership? Or is the truth – if such a thing can ever be pinned down and vivisected – something even more baroque and uncanny?

Scary, beautiful, disturbing and often utterly inappropriate, the full-colour exploits of the masked misfit misses is accompanied by an enticing extra tale in muted monochrome as the mysterious masqueraders return to show ‘How It Works’, after finding a possibly handsome stranger stashed in a box in a starkly surreal swamp.

Reminiscent of Rick Geary, Jason Lutes and Charles Burns whilst being nothing like them at all, Rickheit presents singularly surreal and mannered designs; highly charged, subtly disturbing delusions that chill, bewilder and possibly even outrage.

Compelling, seductive, sublimely quirky, blackly hilarious and nigh-impossible to forget – as long as you’re braced for the unexpected. If you are at all tempted or intrigued you must see this splendidly slewed and offbeat chronicle.