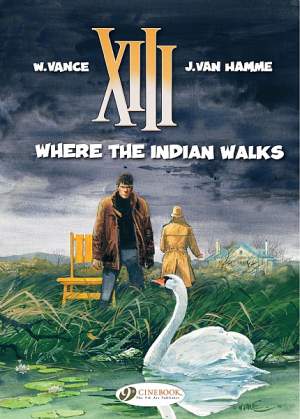 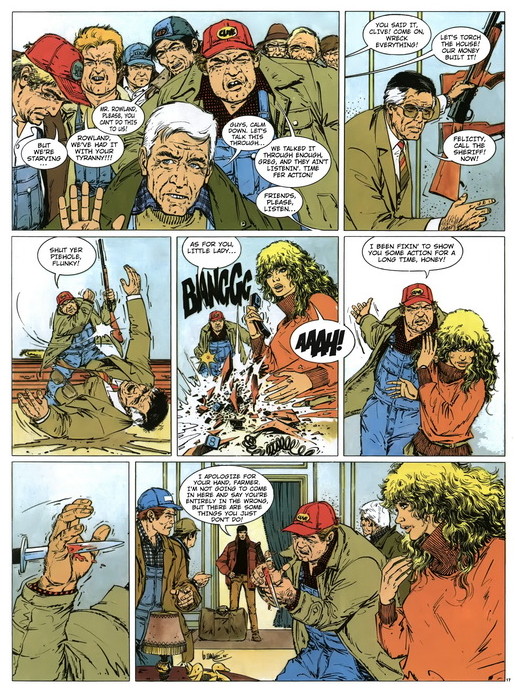 In the opening book of this eighteen volume series the sea tide deposited an unconscious man in his thirties on the rocks of a rural beach community on the USA’s Eastern coast. Although surprisingly capable, he was amnesiac, but over the course of Day of the Black Sun he first became aware that some very dangerous people were intent on killing him, and was then told he’d been involved a successful plot to assassinate the President.

As with so much about XIII, this isn’t necessarily a spoiler, as deceit and manipulation are core to Jean Van Hamme’s complex scripts. Much of what is revealed and believed to be true is later in the series either discounted or given a new layer of interpretation. There are those who’re frustrated by this constant pulling of the rug from under their feet, while others relish the twists.

XIII is so named after the roman numerals tattooed on his collar bone, and as the book opens, he’s attempting to track down a clue. One of his would-be assassins carried a photograph of him for purposes of identification, picturing him with a woman identified as Kim Rowland, wife of deceased army officer Captain Steve Rowland. As is often the case throughout the series, XIII is due quite the surprise.

This volume introduces a pair of characters who’ll have recurring roles, General Ben Carrington and Lieutenant Jones. Her level of training places her on a par with XIII’s capabilities, and there’s a fulfilled mutual attraction. While in some ways Van Hamme’s attitudes are resolutely old fashioned, he should be given enormous credit here for the introduction of Jones. She may only ever be referred to by her surname, a bit of a running joke as the series progresses, but how many American series of the 1980s had a starring role for resourceful black woman who can look after herself? Only Chris Claremont’s take on Misty Knight comes to mind.

Artist William Vance’s visual template for Carrington is actor Lee Marvin as he was in the 1980s, craggy and ravaged, but still offering glimpses of the handsome man he’d been. Elsewhere Vance turns in page after page of superlative, detailed action art.

Van Hamme bases the undercurrent of his plot on the assassination of President Kennedy in 1963, and the entire library of myth, conjecture and conspiracy theory that’s grown around the event. It provides for rich material, and by the end of this book delivers a conclusion that will leave readers panting for the next, All the Tears of Hell.

Prior to Cinebook publishing the entire run of XIII, there’d been a couple of false starts in English. Catalan published this and its predecessor as Code XIII in the 1980s, and in 2007 Marvel collected the first three books as The Day of the Black Sun under their short-lived partnership with Dabel Brothers publishing.