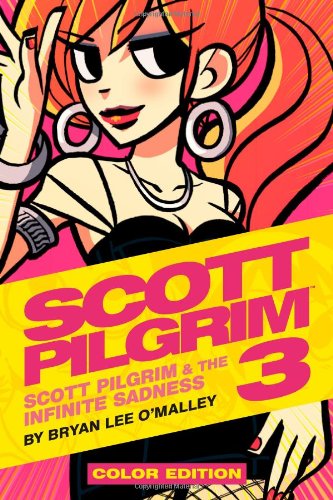 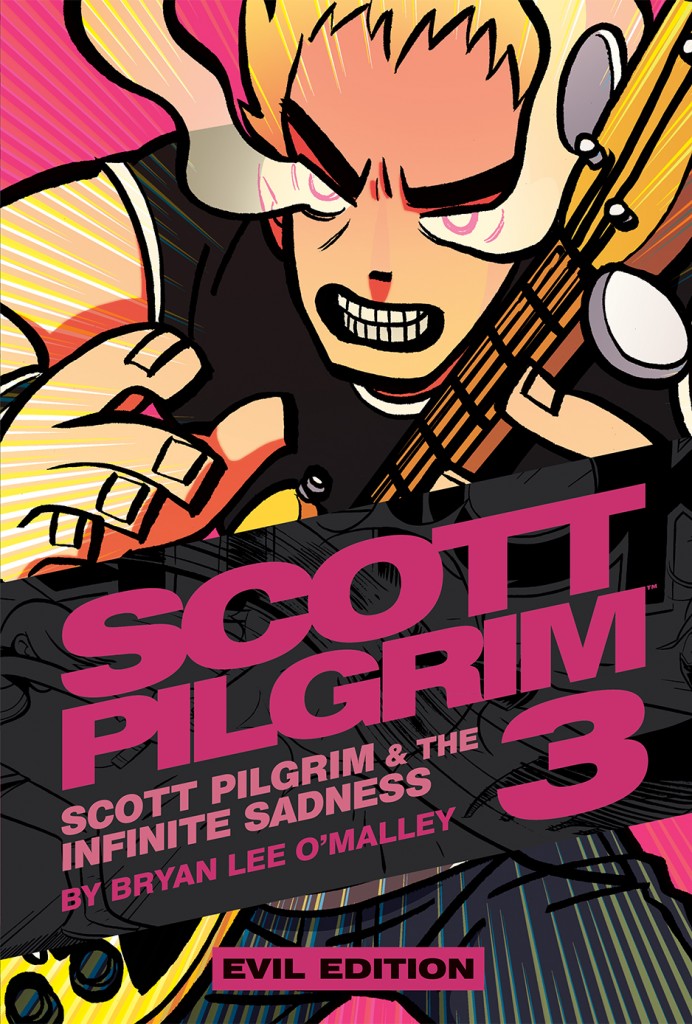 Scott Pilgrim Color Hardcover Volume 3: Scott Pilgrim & The Infinite Sadness is a deluxe reissue of Bryan Lee O’Malley’s smash-hit videogame/romance/fight epic previously published in 2006, and continues from Scott Pilgrim vs the World. The new colour editions of the Scott Pilgrim series have been coloured with great flair by Nathan Fairbairn, working closely with O’Malley who has tweaked some of the art and rewritten a few jokes to take advantage of the new format.

Scott Pilgrim is a twenty-something slacker attempting to defeat seven evil ex-boyfriends so that he can date Ramona Flowers, the woman of his dreams. He has vanquished two of them and now has to battle Ramona’s third evil ex, Todd Ingram, who turns out to be the boyfriend of rock star Envy Adams. Unfortunately, Todd has psychic powers, because he’s a vegan (“graduated top of his class from vegan academy and everything”), and Scott can’t hope to match his superior bass playing skills either. Plus, Envy Adams was once Scott’s girlfriend and he isn’t over her at all, and there’s also Knives Chau to think about, who still isn’t over him. O’Malley’s funny, bizarre and cool mash-up of Japanese manga, videogame and anime styles mashed through a Canadian indie-rock, Dungeons & Dragons role-playing setting is completely ridiculous but somehow quite believable. The characters are very well defined even if Scott himself is somewhat of a void – but there are reasons for his flakiness which will be revealed if you keep reading.

This new colour hardcover also includes 40 pages of extra material featuring two self-contained short strips – a Scott Pilgrim story created for free comics day, and a solo Kim Pine story which ties into events in this volume. There are a few unused cover designs, a process section showing sketches and development designs for The Infinite Sadness, and three deleted pages which didn’t make it into the final story.

There’s enough going on with these new colour editions for existing fans of the Scott Pilgrim series not to feel shortchanged if they pick them up. If you haven’t read it before, this is the best way to start. These Hardcover editions are not much more expensive than the original black and white softcovers, but with the colour, increased size, whiter paper and all the extras, these are the definitive way to experience this series. Next is Scott Pilgrim Gets it Together.