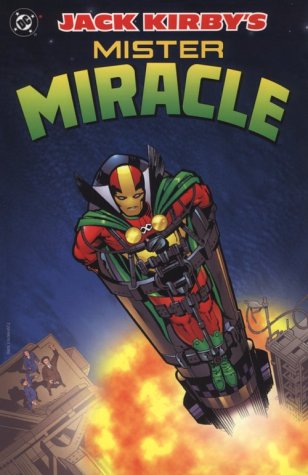 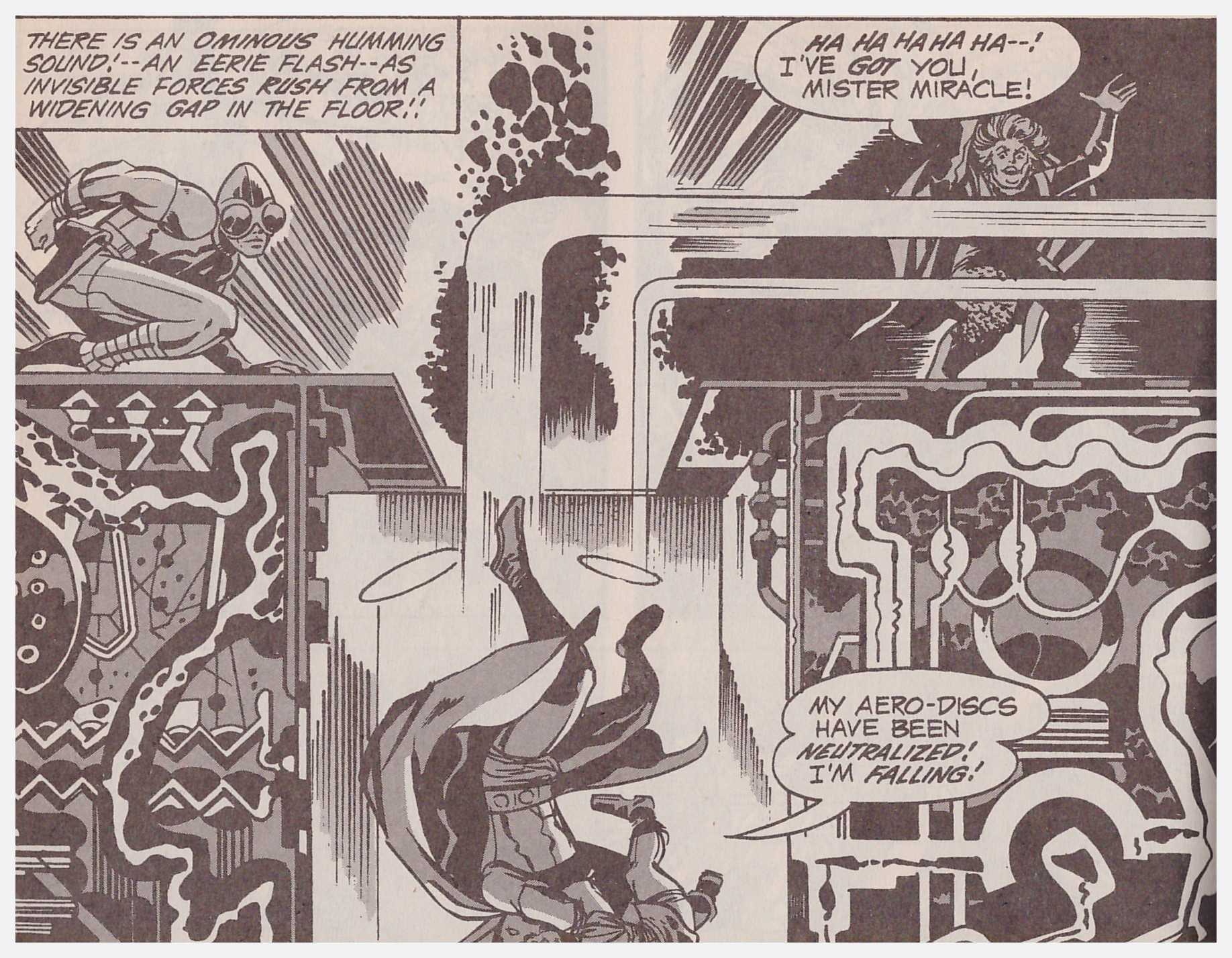 This opening collection of the legendary Jack Kirby’s Mister Miracle covers the first ten issues from the early 1970s. The remainder are found in a companion volume confusingly titled Jack Kirby’s Fourth World featuring Mister Miracle. Both are, controversially, printed in black and white with grey tones.

Kirby is a master of composition and movement and there’s an amazing energy to his work. The early chapters are inked by Vince Colletta, whose fussy thin inking all-but ruined Kirby’s work on Thor in the 1960s. Here it works okay. It’s possible Kirby’s later work was pencilled exactly as it should be inked – reduced to clear lines the inker just had to follow, rather than deciding how to render tones and vaguely pencilled areas into ink. From issue five Mike Royer takes over as inker, adding weight, clarity and fluidity, and defining the look of late-period Kirby. Figures look truly statuesque, monumental even, as if hewn out of stone.

The book opens with an origin story. The otherworldly Scott Free is on Earth, where he chances to meet aging escape artist ‘Mister Miracle’, and becomes embroiled in his fatal feud with gang boss Steel Hand. Scott assume the Mister Miracle identity, and subsequent issues focus on friends and foes from his past, initially on earth and then on their home planet Apokalips.

Kirby’s writing, like his art, is like a raw, pure energy rush. He clearly has a powerful, deep-rooted, almost mythological sense of narrative pumping out. Kirby is also credited as editor. It’s known that he  spent two years negotiating his contract with DC, so this may well have stipulated he have full editorial control with no interference, yet the stories may have benefited from editorial input. The scripting is reminiscent of the Lee/Kirby work at Marvel: it adds any explanation the pictures require, while maintaining a brisk pace. The endings can feel a cheat, like when Scott escapes an elaborate trap using a “tiny, powerful utility instrument” that he’s never mentioned before! Also the characterisation doesn’t always ring true, an example being Oberon, the original Mister Miracle’s assistant, instantly switching loyalties to his replacement.

In addition to the main story there are a few ‘Young Scott Free’ shorts, showing his upbringing under Granny Goodness’ brutal regime. The walls of the ‘school’ are plastered with mottos: “Cruelty breeds respect”, and “Die for Granny — and she will live for you”. The book’s introduction by former Kirby assistant Mark Evanier, suggests Jack was channeling his own experiences in the comics industry.

The series is fun, and a great vehicle for Kirby’s visual invention and dynamic action sequences. The artwork still looks strong in black, white and grey, and all original cover art is included. The printing in greyscale is a strange decision – possibly the economics of the time? However the grey tones add coherence to the often frenetic images.

At time of writing, the only other ways these stories are available is spread over four expensive hardback Jack Kirby’s Fourth World Omnibuses, or by tracking down the original issues. So this imperfect edition is still a good option. Unless budget is of no consequence, in which case there’s also the hardback Mr Miracle Artist’s Edition, reprinting seven almost complete issues on large pages, reproducing the original art as drawn.