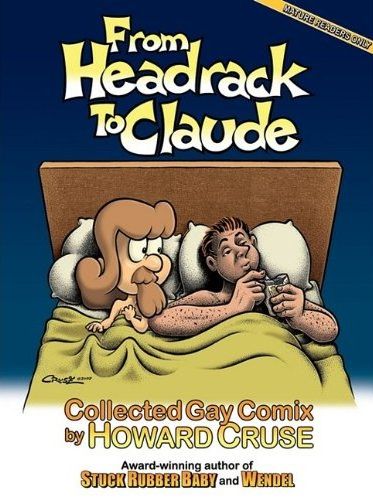 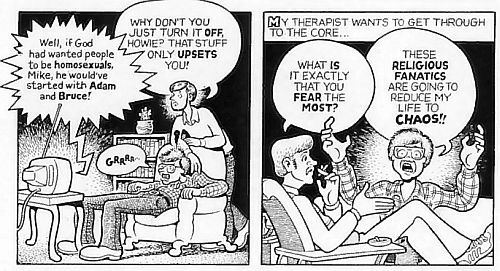 The publication of From Headrack to Claude, a collection of gay-themed short stories by Howard Cruse, serves as a welcome companion piece to his long-form works, The Complete Wendel and Stuck Rubber Baby.

Cruse covers more than thirty years in this book, beginning with the Barefootz strip where one of the character momentously came out: Headrack was a painter, friends with the eponymous shoe-less main character, in a strip that Cruse wrote and drew in the 1970s for various underground comics. In 1976, a long story showed Headrack confronting a homophobic guy in the unique way of the characters of that series; that is, by blending social commentary and absurdist humour. Cruse wasn’t professionally out yet, so this strip was obviously very important to him–and it’s never been reprinted before.

Even more important was his 1980 professional coming-out when he edited the first four issues of Gay Comix, a comic-sized anthology published by Kitchen Sink Press. There’s great humor in some strips he created for that anthology. The parody of Matt Groening’s Akbar And Jeff is hilarious, as is the story of a lonely gay guy ordering a butch-looking, moustachioed doll to keep him company. Essentially, though, Cruse’s stories are about the way we relate to each other, filtered through his sensibilities, where whimsical situations and serious themes are never incompatible.

‘Billy Goes Out’ shows a young man wandering through his own life after a tragic loss, ‘Jerry Mack’ sees an older pastor reflecting on his youth and the way he “managed” to escape his same-sex attractions, and ‘Dirty Old Lovers’ gives us the unforgettable portrait of two old guys still taking large bites out of life, and not giving a damn about how others see them. In the gay community, which often seems torn between the need for self-expression and the slippery slope of conformity, Cruse’s two old characters stand out among the clones and muscle queens. The most serious of them is ‘Safe Sex’, which arose from Cruse’s desire to address the question of AIDS in a short story. The result is an intelligent mosaic of bits of dialogues and situations, never preaching but presenting a complex view of the state of affairs in 1983.

While Barefootz was drawn in a big foot/big head style, the stories from Gay Comix are mostly drawn in the more realistic style used by Cruse in his Wendel strip, which began in 1983. Characters retain that bounciness describing their body languages and their attitude toward life. Another characteristic of most of those pages is their density: while being reader-friendly, Cruse’s panels are very full. Characters, backgrounds, dialogues and captions build a world in which readers can immerse themselves.

It’s fitting that the last strip is the one-pager ‘Then There Was Claude’, depicting a bed scene between an unnamed narrator and Claude, a young, cute, would-be preacher quite at ease with being closeted most of the time. Here in only one page, inspired by the author’s own life, you have sex, humour, social commentary and a cartoony line art blended with Cruse’s “busy inking” associated with Stuck Rubber Baby. It’s a summary of Cruse’s whole career, thematically and stylistically.

The strips reprinted in From Headrack to Claude might not be new, but they’re as relevant as when they were first published. More importantly, they’re as well-written, as well-drawn, and as funny (and often more), as anything else that’s been published in the last thirty years, within or without the gay comics arena.