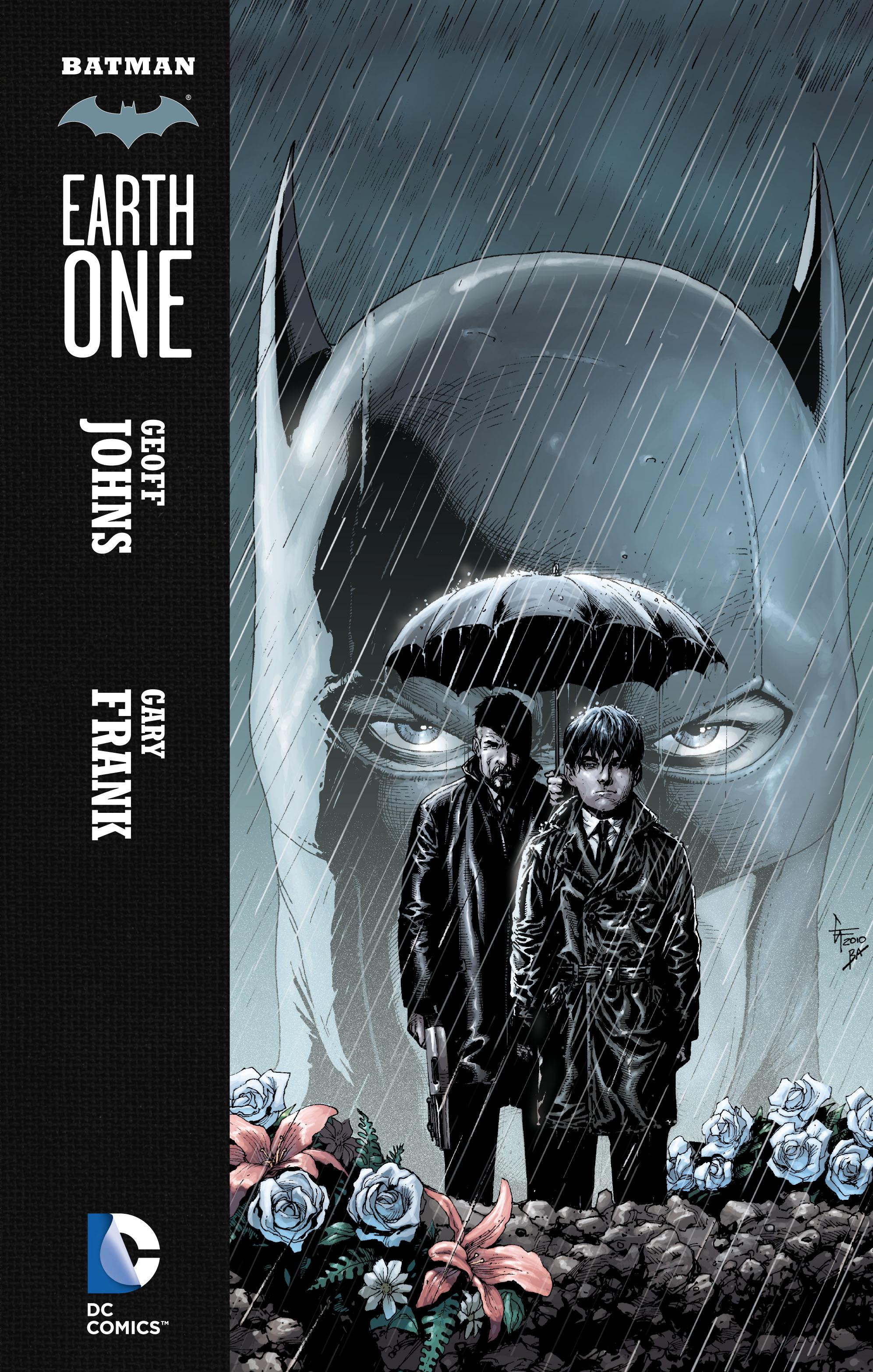 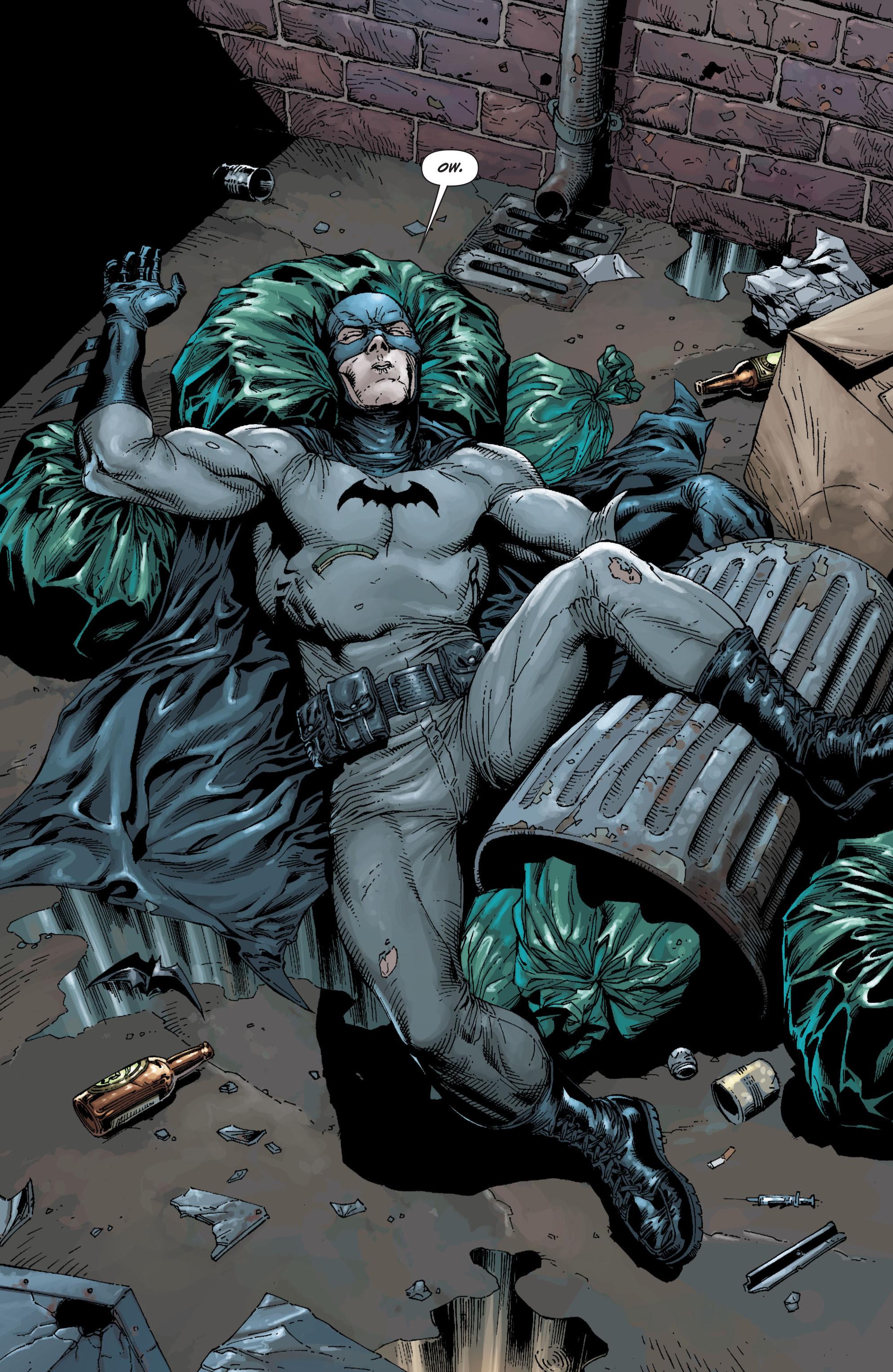 Geoff Johns deserves some credit for courage. More so than any other superhero, multiple Batman stories have revisited his origin, tinkered with it, or presented an alternate version, so many that one might imagine the well has run completely dry. Some revisions have startled, but with the passing of time and more added to the genre, it takes something special to stand out, and the most successful revisionist interpretation of recent years has been Grant Morrison’s spectacular from the ground up re-envisioning. Johns not only pulls it off, he wallops it out of the park.

There’s only the single word over the opening eight pages, “Ow” as a novice Batman misjudges a leap when chasing someone, and falls into the trash several floors beneath. We then cut back to the past with Thomas and Martha Wayne determined to take their family trip to the cinema despite warnings of danger, as they want Bruce to have a normal life. It’s a knowing wink to the readership, and the literal hypocrisy is stated by the newly arrived Alfred Pennyworth pointing out the surrounding opulence. A very familiar scene then takes place, the difference being that young Bruce is a spoiled brat. This is a rare lapse, possibly intended to convey the quixotic nature of children, but in isolation it sends the wrong message.

Where Johns has been clever is in keeping Bruce Wayne and Batman pretty much the same in this alternate universe, but making radical changes to other familiar characters. Alfred is not the servile, if occasionally droll, butler, while Gotham detectives James Gordon and Harvey Bullock have completely altered personalities. Johns maintains the Gotham establishment and the sordid, corrupt nature of the city, and paces his story extremely well, including some punch the air moments. Perhaps the most impressive achievement is that everything thrills without Johns resorting to the use of a known Batman villain in that capacity until the final pages.

In the past characters drawn by Gary Frank have been stiff and posed, which still occasionally occurs, but his page layouts for Earth One are thrilling, energetic and spectacular. This is a very angry Batman and Frank conveys that characterisation, not least via a visual interpretation that lets us see Batman’s eyes when in costume. Frank achieves a subtlety previously absent from his art with other cast members as well. This is a great looking graphic novel. The one oddity is the cover. It’s a dynamic design and appropriately symbolic, but although not immediately obvious, the shotgun strikes the wrong tone. Batman’s aversion to guns is addressed within, and it’s consistent with the reworking of Alfred’s character, but still not entirely appropriate.

A few caveats are too trivial to mention, so almost everything about this story sparkles, and it rarely takes the turn you’d expect. Some characters may now have different backgrounds, but by the conclusion they’re satisfactorily and logically propelled toward their more familiar incarnations. It’s amusing to imagine the gross Harvey Bullock we know did start out as a failed TV presenter.

If you like what Geoff Johns has written elsewhere at DC, and most do, pick this up with confidence and look forward to volume 2.