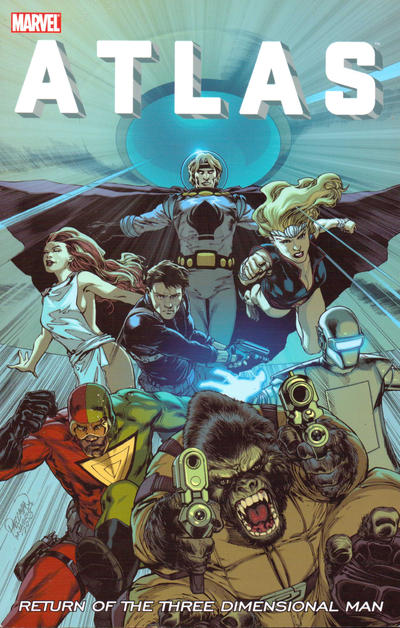 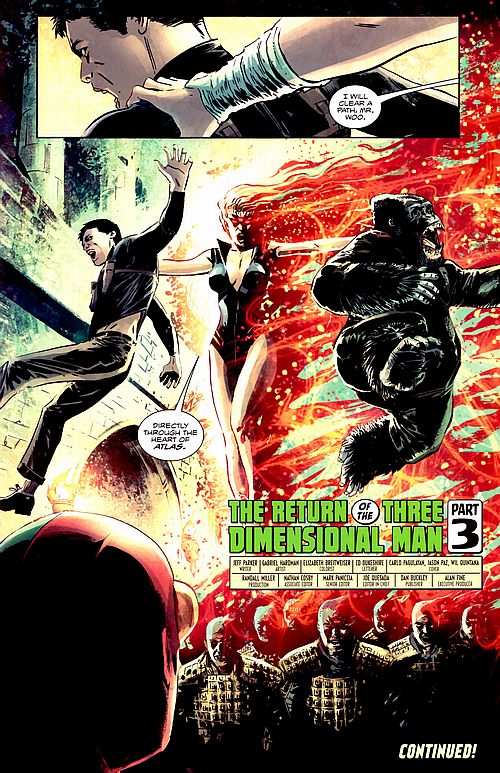 The last hurrah of writer Jeff Parker’s Agents of Atlas is a relaunch of the first series, complete with a new title (or rather, a shorter title, since it is now simply called ‘Atlas’). Unfortunately, it only lasted for five issues but contains what might be the best story since the first.

We open with a story published as a back-up in the Incredible Hercules series. There’s a reason for the pairing: the Agents find themselves in the middle of the ‘Assault on New Olympus‘ storyline in that series as they face Greek gods and creatures while looking for their team-mate Venus. The mythical singer used to claim she was the goddess of Love, and the ‘real’ one was rather displeased, leading to a unusual showdown between the two women. This is beautifully illustrated by Gabriel Hardman, in particular during a sequence set underground, with pages full of darkness and monsters right from a Ray Harryhausen film.

The main course is centred around an unexpected character, namely the Three Dimensional Man. A second-string character from the 1970s, 3-D Man has never been used with real impact. A second character with the same name was introduced in Kurt Busiek and George Pérez’s run on Avengers, and both versions appear here. Parker weaves a tale harking back to his opening Atlas work, when the existence of a parallel world accessible to the Atlas foundation was revealed. This world is inhabited by strange creatures with seemingly ugly intentions and 3-D Man is the only one who can see them as they possess human beings–including Namora. Parker builds a story that begins as something in the tradition of the paranoid science-fiction of the 1950s (though it is set in the present). Fortunately, it ends up as something far more interesting. It cannot be resolved by brute force, but requires intelligence and openness, something far too rarely seen in superhero comics.

Hardman illustrates most of this story, with Ramon Rosanas stepping in for back-ups and Jeff Parker himself (he drew his first book) picking up the pencils for a short sequence. Hardman keeps supplying wonders until the last page, even though the story clearly lacks room to breathe at the end. There are two prose sequences which, although well written, should have been the equivalent of one more comic. Marvel let Parker finish his story, but it’s a pity that he wasn’t given enough pages to do so in a completely satisfactory manner.

Return of the Three Dimensional Man is a tale of being true to oneself and accepting others. Throughout the seven volume series, all the agents have had to face themselves and their often morally-muddled past. The overarching theme of Agents of Atlas, beneath its fun veneer of 1950s kookiness, has been one of finding people who accept you for who you are, whether that’s a killing robot or a talking gorilla. This last volume is no exception, with Marvel Boy finally showing his team-mates what his life for decades among non-humanoid lifeforms really means for his true nature. So, while Agents of Atlas ending was rushed, it did get an ending (something not all commercially unsuccessful series can boast) and it remained to the end a great example of humane superhero stories, with characters who embrace and celebrate their inner and outer weirdness.