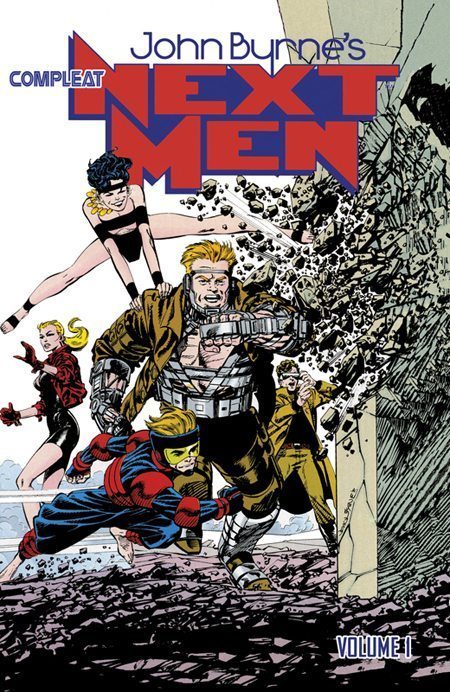 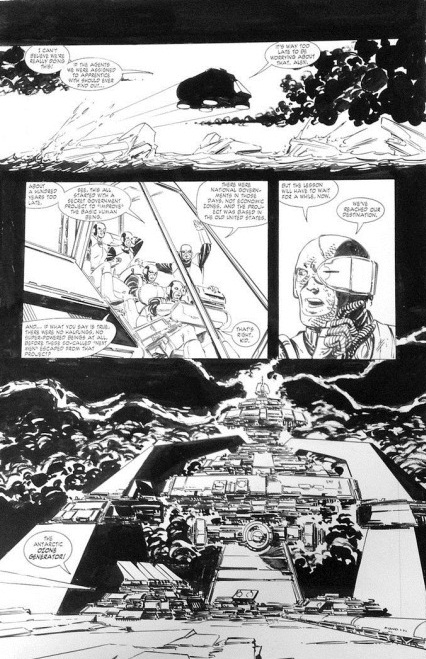 The eccentric title spelling, belies an investment in a series that ostensibly focuses on a group of genetically engineered teenage superheroes, but is actually a study in shades of grey, giving an ironic sheen to a black and white presentation. US Senator Aldus Hilltop, bestrides this collection as Byrne examines morality, hypocrisy, and lust for power. It’s Hilltop’s government funded project that secretly creates the superheroes, and even when ties are snapped, his presence continues, affecting both the Next Men and the characters of connected back-up strip ‘M4’, included here, but absent from the 1990s colour graphic novel Parallel, combined here with Book One. It’s a neat chase strip, of someone caught up in circumstances beyond their control, but with an exceptionally useful protective ally. Also featured is the glimpse into the future of ‘2112’, a form of prologue from which the sample art is taken. It’s only tenuously connected to the Next Men’s story, that almost an afterthought, and overall it’s the weakest content as it never transcends the genre origins, although from volume two the cast will play a greater part. It’s nice to see Byrne toying with Jack Kirby style ideas, however, and modifying his preferred style in places to emphasise this.

As far as the remaining art goes, this is Byrne on top form, still enthusiastic about drawing, and contrasting his previous superhero work by frequently letting the art tell the story without words. He’s always had a superb sense of dynamism, and solid visual characterisation is a further strength, so no words is just fine. In terms of writing style, Next Men still reads as relatively contemporary because Byrne dispenses with thought balloons, and takes a decompressed approach to the storytelling, but this doesn’t run out of control, always including enough substance per episode.

The Next Men’s story is ambitious. The first five chapters are a 24 hour spell during which the five teenagers awakening from their programmed learning within a virtual environment while comatose, to discover the real world and their possible place in it. The following two single chapters explain how their world came about, then jump forwards six months for a neat explanation of powers and personalties. A trip to Russia to help with the crisis caused by their equivalents occupies the remainder of the book. It’s all very readable, rarely predictable, and often shocking as Byrne has the freedom to include topics unpalatable for company owned superhero properties.

A second Compleat volume gathers the remainder of the 1990s series, and IDW followed these reprints with traditional colour volumes, Classic Next Men, and hardcover presentations titled The Premiere Collection. Alternatively, the content is found in the Dark Horse collections Book One and Parallel, but those don’t feature eihter ‘2112’ or ‘M4’, which becomes an issue in later Dark Horse collections. 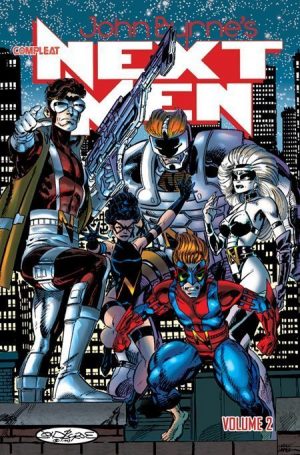