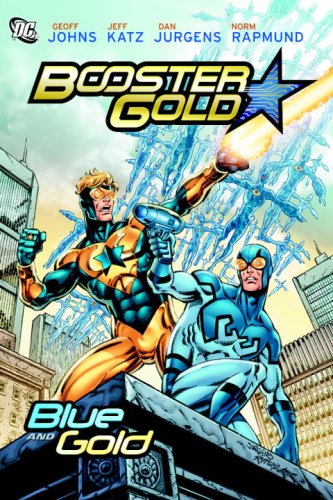 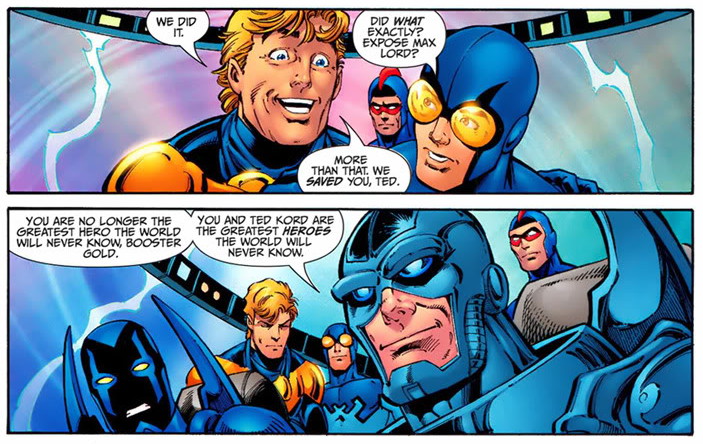 Booster Gold and Ted Kord (the second Blue Beetle) were the class clowns of Maxwell Lord’s Justice League International: a couple of roguishly charming frat-boys who could save the day, but never get the girl or any respect. The fun and games ended when Lord murdered Beetle, precipitating Infinite Crisis. Booster was shattered but thereafter redefined himself as a true hero in the multiversal conflagrations of 52 and Countdown.

After Booster defied his surly mentor Rip Hunter, and aided by three other Blue Beetles plucked from their own timelines, altered the prime timeline to rescue Kord, he found the world utterly changed. In this new timeline Lord and his OMAC cyborgs have conquered Earth, and only a few metahumans are still alive and free. Now, as scripted by Geoff Johns and Jeff Katz with art by Dan Jurgens and Norm Rapmund, the crisis begun in 52 Pickup concludes as the odd couple of the heroic set rally those survivors allowing Blue and Gold to lead one glorious last hurrah of the reformed Justice League International. Even as they do so however, in the background a shadowy cabal of super-villains calling itself the Time Stealers is manipulating events across all realities for their own sinister purposes.

This is a fans’ story for die-hard comics devotees with in-jokes and shared historical moments adding to the unbridled enthusiasm and exuberance of a classy time-busting tale, and that’s a great pity since this is also a very well crafted story that a wider audience would certainly appreciate if only they had sufficient back-grounding.

Gold’s heroism and Beetle’s sacrifice are the very bread-and-butter of superhero comics and even the eccentric post-script wherein our hero meets his ultimate legacy in the far future all add to a fabulously rounded cape-and-cowl experience.