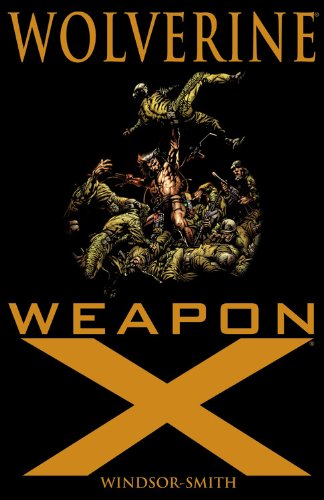 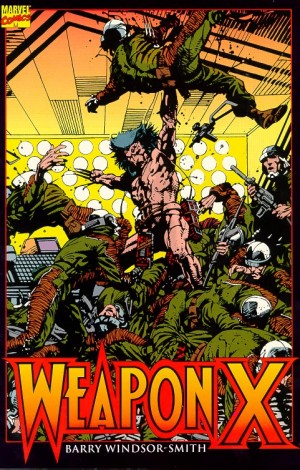 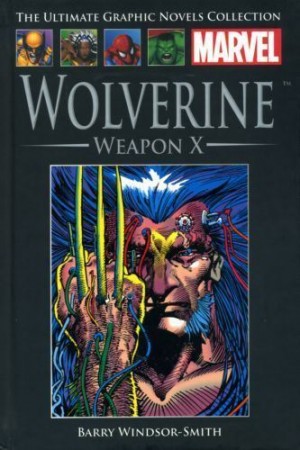 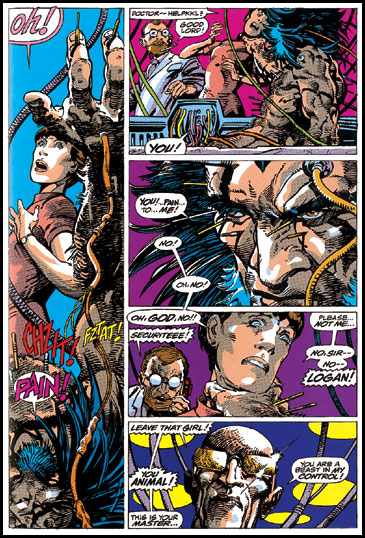 Barry Windsor-Smith is a contrary creator, true to his own muse and never one to compromise. It’s probably cost him a lot of work over the years, however it’s also ensured a compact but top class body of comics. The Windsor-Smith name is pretty well a guarantee of quality, and Weapon X is near the top of his output.

What they got was an incredibly ambitious, dense and layered story, from someone not known as a writer at the time. It was out of step with the early 1990s by not concentrating on pin-up art, and completely isolating Wolverine, or Logan as he’s known throughout, from the Marvel universe. It begins with an almost noir narrative of a downbeat Logan’s fragmented memories of the past beginning to surface, these later symbolically tied to images of him submersed in preservative fluids as some sort of techno-organic process is occurring. This is startlingly illustrated featuring immense detail. What at the time was a complex overlaying of narrative dialogue captions are distinguished by colour coding, and there’s a constant questioning of ethical priorities. There’s even a good surprise toward the end.

Logan has been identified as a loner no-one will miss if abducted for an experimental scientific project, except his kidnappers are unaware of his mutant healing factor and his claws. The process emphasises depersonalisation, rationalising that normal people are capable of terrible deeds if conducted by men in white coats. No-one’s full name is revealed, and neither is it known on whose behalf the process is being carried out. The torture is horrendous. Eventually, cathartically, inevitably, the tables are turned, and that’s equally horrendous. Instead of an origin, the story’s concern is restricted to Wolverine’s skeleton being bonded with adamantium, a near indestructible metal alloy, co-incidentally introduced in one of the earliest stories Windsor-Smith drew for Marvel.

The art is a labour of love from a master craftsman. Windsor-Smith is lavish with the detail, yet never at the expense of ensuring the story can be read. Despite this discipline memorable images abound: Logan in the floatation tank his body punctured by wires and tubes, a naked Logan reflected in spectacles, a splash page of a bloodied Logan atop a pile of dead troops… So much thought has been applied before the drawing began.

It’s also worth noting the care taken over the colouring. It’s a wonder Smith didn’t go blind such is the stained glass effect of almost every page. He doesn’t consider this best represented in later reprints on gloss stock, having designed the palette for reprinting on poor quality newsprint, but not everyone would agree. The vivid effect is equally unique.

No edition of Weapon X features much in the way of extras. According to Windsor-Smith’s blog this is because Marvel expected him to provide his background material and preparatory sketches for free and they’d take ownership of it besides. It doesn’t sound much of a deal, particularly when considering that when originally paying for the story they can’t have ever imagined it would still be acclaimed, in print and earning them money 25 years later.

Marvel later published a series titled Weapon X, some of it good, but none of anywhere near the sheer class and quality of Windsor-Smith’s epic.