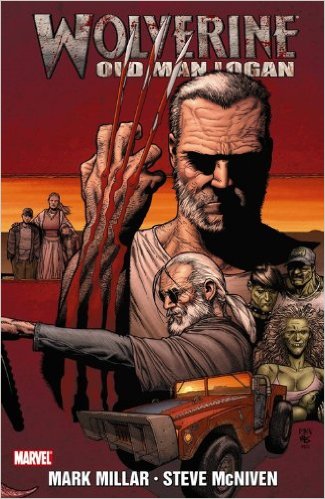 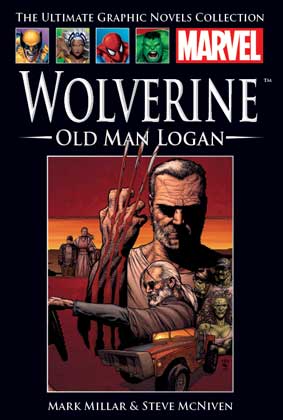 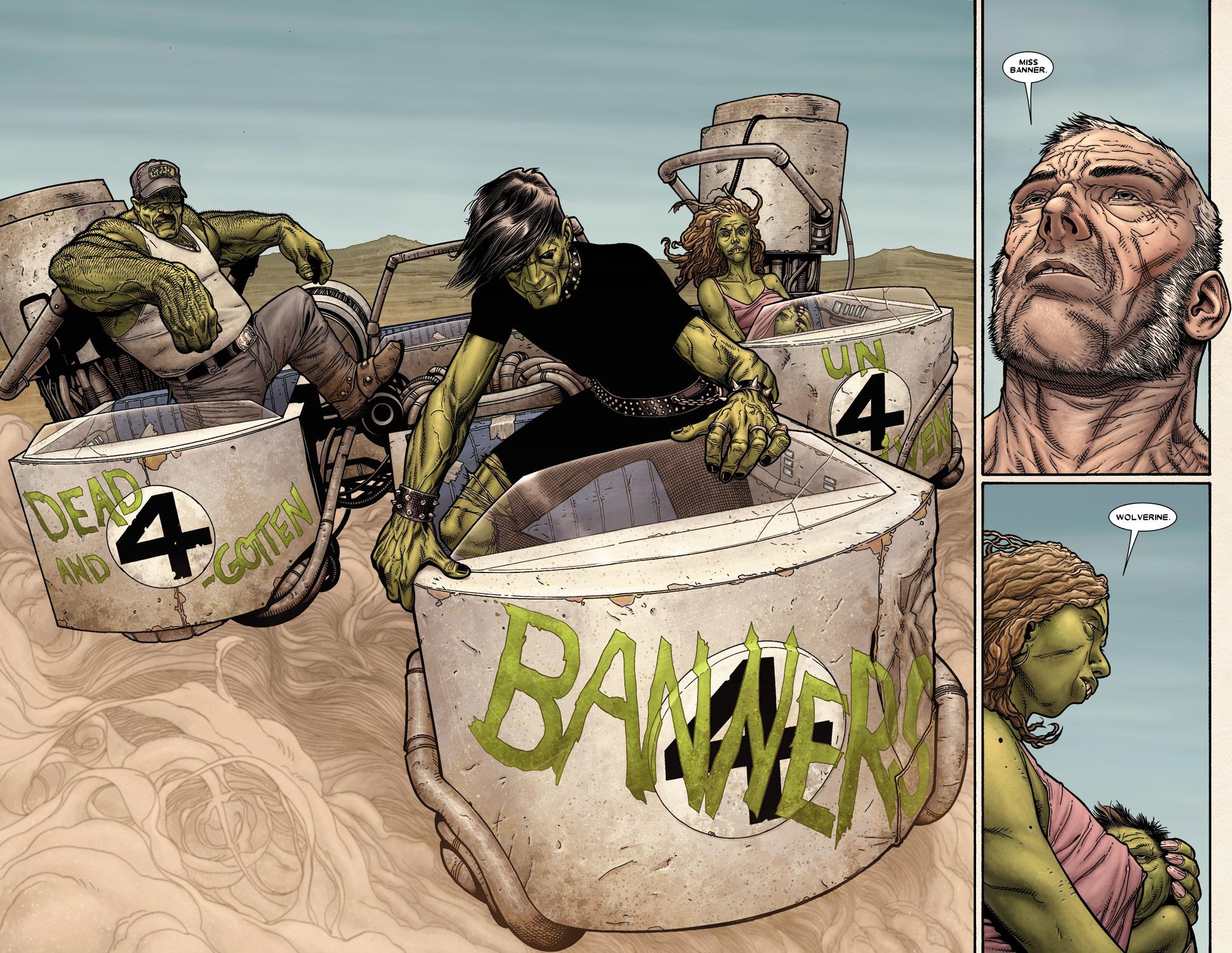 It’s a few decades down the line. “Nobody know what happened on the night the heroes fell. All we know is that they disappeared. Evil triumphed and the bad guys have been calling the shots ever since.” How’s that for a combination of introduction, teaser, and compacted precis?

We see an unfamiliar Logan in the opening sequence, a family man, just keeping his head down, taking crap, barely scratching a living, and three months behind on his rent. His savage superhero days are consigned to the past, and this Wolverine doesn’t fight back. We’ve all seen enough Clint Eastwood movies to know where this is going, right? Well, yes, but not for some considerable while. Mark Millar first takes us on a prolonged detour through Mad Max instead, as Logan and a now old and blind Hawkeye have a package to deliver. This involves crossing from what was once California, now Hulkland, to the President’s Quarter on the East coast.

Along the way Millar fleshes out the status quo via dialogue and stop-offs, toying with Marvel familiarity as he spins out the destinies of well kent faces. Halfway through he presents the big reveal, the reason Logan’s personality has changed and why he’ll no longer use his claws. The more astute reader will already have an inkling, but Millar plays it out in such bravura fashion that any prior guesses are trumped. Don’t stop too long to think about it, though, as some nagging suspicions about the likelihood will emerge.

Steve McNiven’s ultra neat and tidy pencilling style is endowed with some grit by the inks of Dexter Vines, and he also takes his cue from the toying with familiarity to produce some memorable images. Early on we have the Hulk’s grandchildren, there’s the skeleton of a giant Loki with a building collapsed on him (an image later reprised to even better effect), and the Red Skull etched onto Mount Rushmore.

This is an episodic, buddy road trip story, not too far removed from Judge Dredd’s Cursed Earth saga, surely read by the young Millar, and he sustains the tension primarily via postponing the inevitability of Wolverine popping those claws. Rest assured, when they pop there’s some righteous slicing and dicing.

Old Man Logan isn’t the full-on sustained headrush of Millar’s other Wolverine magnum opus Enemy of the State (with which it’s collected in Wolverine by Mark Millar Omnibus), at least not until the final chapter. The opportunity to pause for thoughts reveals some rather unlikely plot developments, and others that have too great a narrative convenience, twists for their own sake rather than any greater purpose. The signposts are sometime obviously planted as well, and funny it may be, but the conclusion also defies logical scrutiny. On the other hand, the good far outweighs this carping and Old Man Logan is a thoroughly entertaining Wolverine story.

In the UK this is also available in hardback as part of Hachette’s Ultimate Graphic Novels Collection.