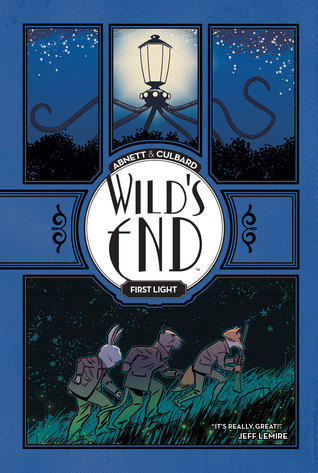 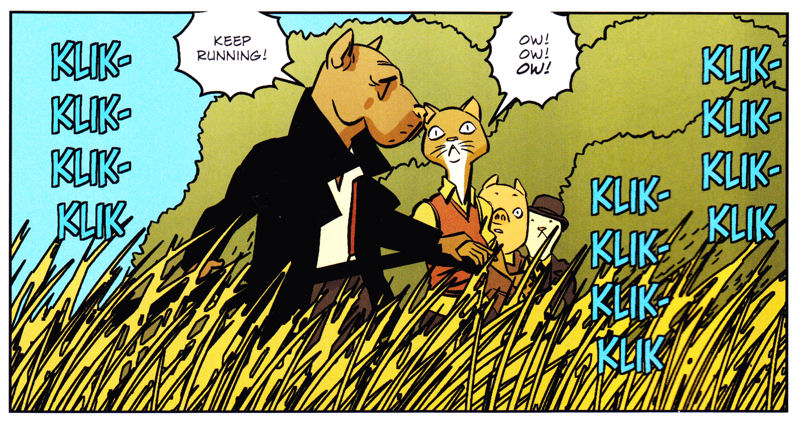 Dan Abnett and I.N.J. Culbard’s Wild’s End is a very clever blend of H.G. Wells’ classic sci-fi adventure War of the Worlds with an anthropomorphic twist. It follows various villagers, including drunk poacher Fawkes (a fox, naturally), Navy veteran Clive Slipaway (an old dog), and writer/local hermit Susan Peardew (a cat), as they combat the alien invasion of tripods that have landed in their small English village of Lower Crowchurch.

Wild’s End is characterised by fantastic storytelling and an effective method of mixing of both genre and medium. Abnett seamlessly blends ‘funny animals’ in a sleepy town with the realistic sci-fi horror of War of the Worlds, showing his strength as a writer while displaying the adaptibility of both the sci-fi and comics mediums. The entire storyline is steeped in mystery and focuses on how the characters act and react to the invasion, rather than relying on an explanation of the invasion itself. Abnett’s writing is balanced and captivating. While no character is safe from the tripods, what could have been heavy-handed and over-baked has a naturalism about it. The characters and their reactions feel genuine, as does their story world. Culbard’s art effectively humanises the animal cast through their expressions and reactions, as well as striking colours and a simple, but effective palette. Sound effects are accentuated, especially in scenes with the tripods, adding to the suspense of the work.

Each chapter ends with a different medium or character’s perspective, such as newspaper clippings from The Peakminster Examiner, Ms. Peardew’s journal entries, excerpts from her ex-husband’s book, as well as a redacted newspaper article at the end. These are cleverly created, supplying background details, extra information, character emotions, and additional humour without having to rely on exposition interrupting the main story. This form of extra information is possibly Abnett’s homage to Alan Moore and Dave Gibbons’ Watchmen, which incorporated a similar technique. These extra bits of information are fun and effective as they further build the storyworld and reveal the inner workings of each character.

All in all, Wild’s End has the perfect balance of action, character development, and pacing, making it a quick and enjoyable read. The only problem is that it feels too short and leaves the reader wanting more! Good thing there’s a second volume, The Enemy Within. 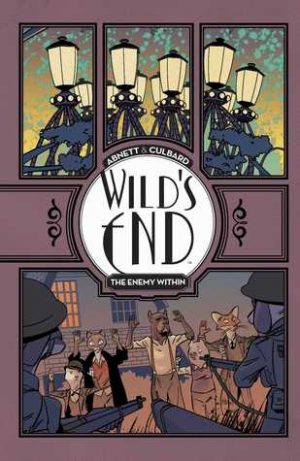