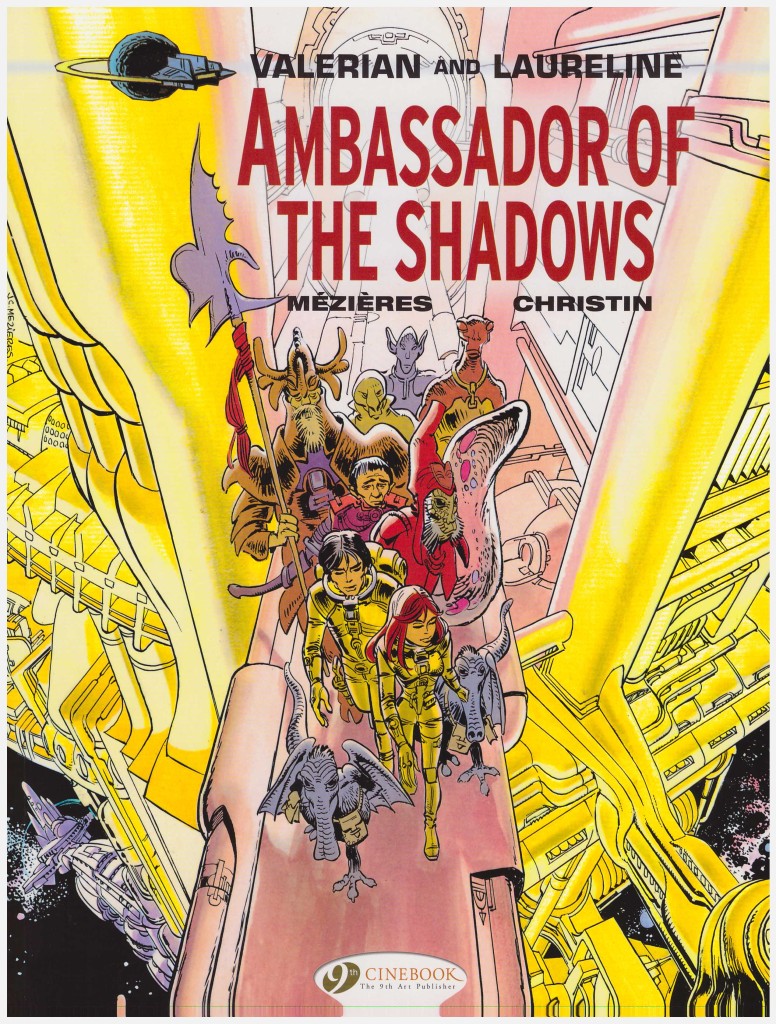 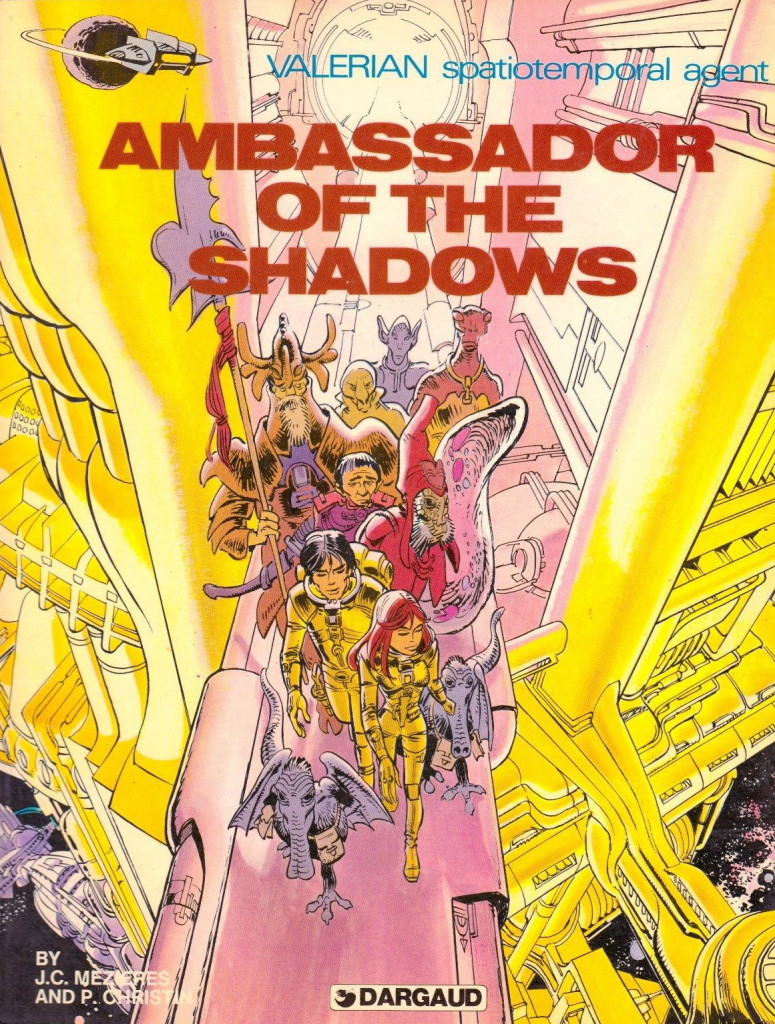 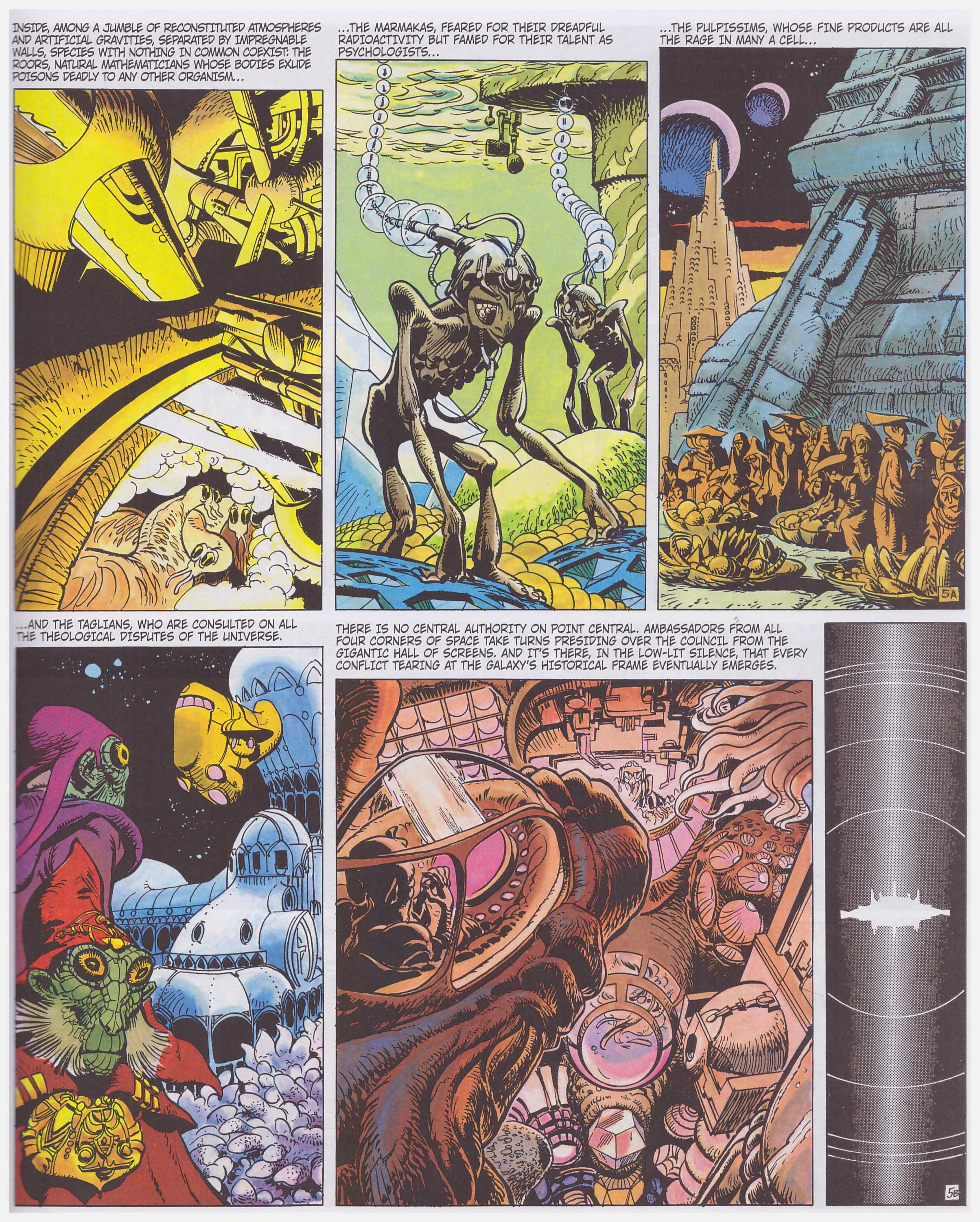 When Darguad, the French publishers of Valerian and Laureline, initiated their aborted attempt to bring the adventures of the Spacio-Temporal agents to an English speaking audience for the first time in 1981, Ambassador of the Shadows was their launch volume. In one respect this is understandable. It’s very good and stands alone. However, those 1980s volumes just titled the series Valerian, and for fully three-quarters of the book Valerian is absent, as the plot focuses on Laureline’s search for him.

This is at a space station where multiple races co-exist. The book delivers a lengthy explanation, but time has moved on since its 1975 French publication, so just think Babylon 5 or Deep Space Nine. The Ambassador of the title, seemingly a caricatured Peter Cushing, is from Earth, who’re taking their turn at presiding over the governing council for the first time, and he has plans. Before he can enact them, though, he’s abducted and Valerian, charged with protecting him, follows. It leaves Laureline to deal with an angry diplomat and take a tour around the assorted races on Point Central to discover which of them might be behind the abduction and why. The answer will surprise.

This is imaginative, contemplative, and unusually for the times paints Earth and its policies in a somewhat tarnished light. Writer Pierre Christin begins by throwing out some philosophical statements brilliantly illustrated by Jean-Claude Mézières. The skeleton of an alien creature jealously guards a giant jewel, and an exotic airship flies across a mountain range with another planet looming large in the background. Mézières puts in the hours over the course of the book, defining the vastness of Point Central, designing dozens of alien races and the environments for many, and characterising the cast far better than in previous books. When Laureline and Valerian disagreed in Welcome to Alflolol you’d barely know it from the illustration, but here it’s clear. And take a look at that final panel on the featured art, with its groovy special effect, and remember this book was published in 1975.

It’s now customary for Christin to throw in an odd and appealing device, and in Ambassador of the Shadows it’s the method with which Laureline is able to purchase information, a grumpy small creature able to consume one item of value and disgorge hundreds. Beyond that, Christin’s ideas about what constitutes civilisation and man at one with their environment are unusual for the era.

After an extended teething period, Valerian and Laureline is now matching the reputation the feature maintains in Europe, and the next book is On the False Earths. Both are also available along with Heroes of the Equinox in the the third Complete Collection. It’s also worth mentioning that much of this volume was adapted wholesale for the 2017 Valerian film.