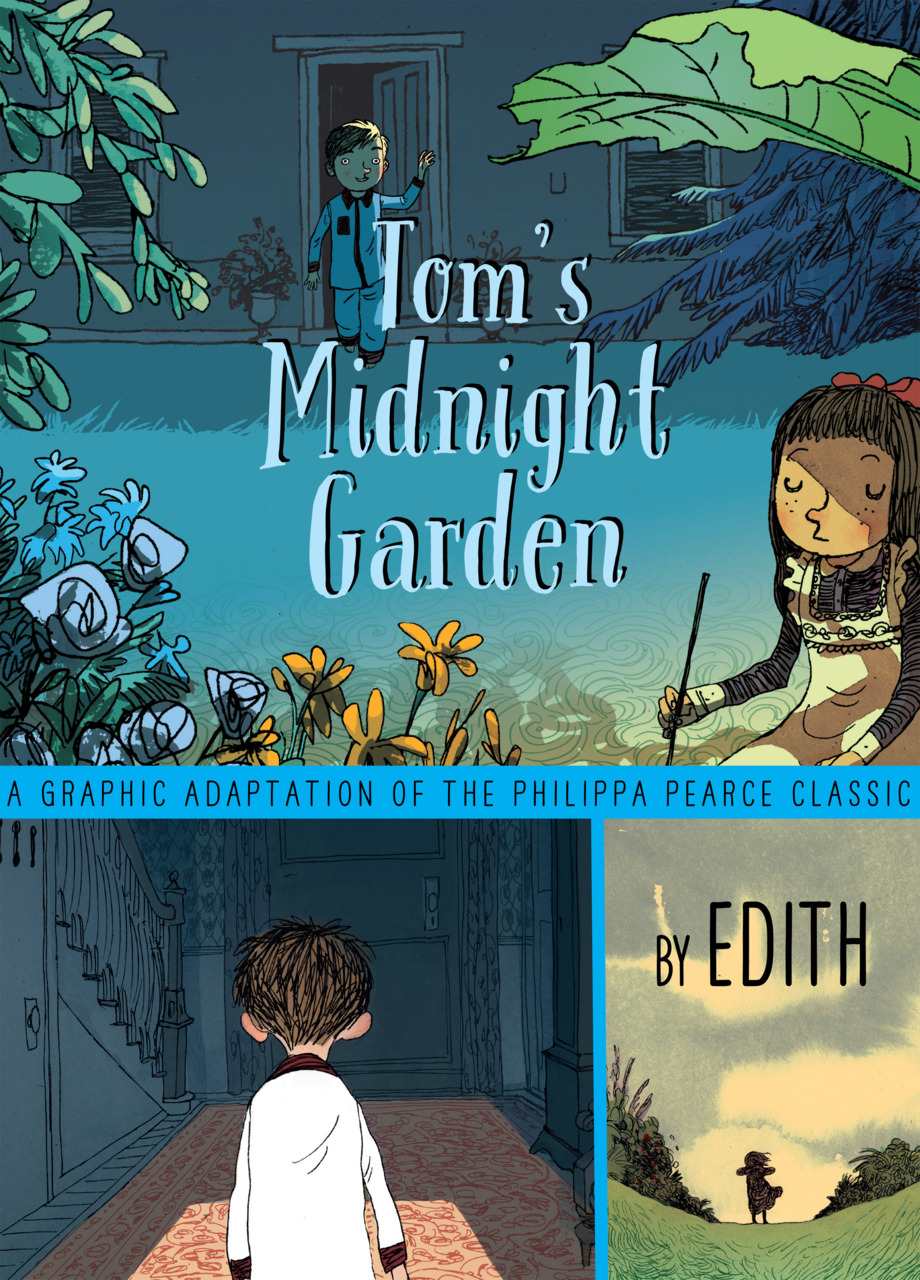 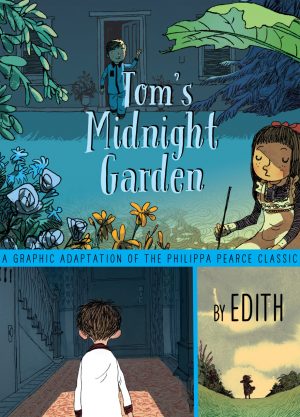 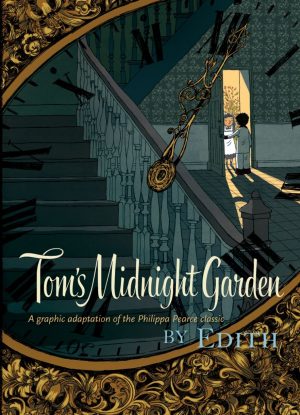 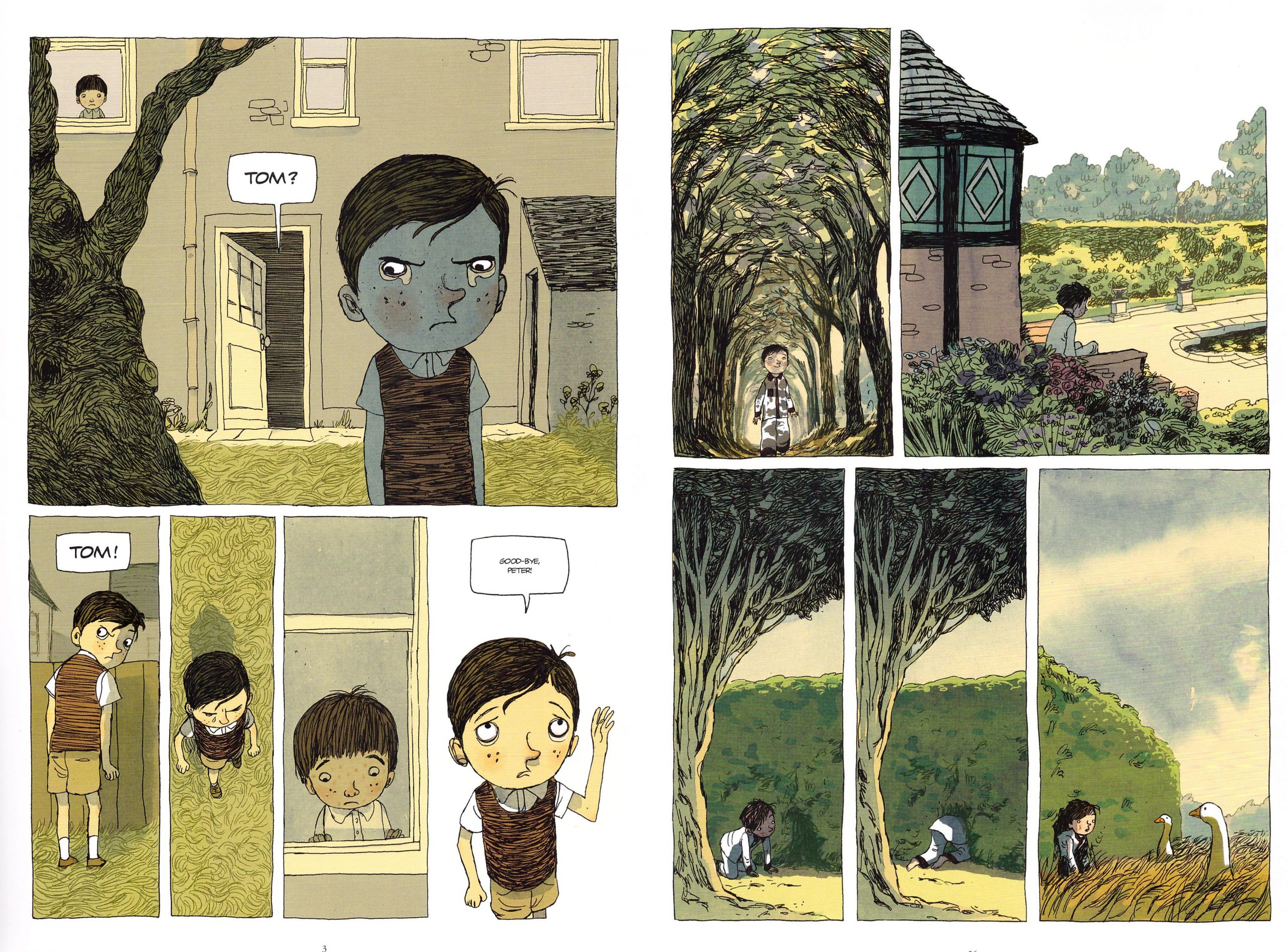 As seen on the sample page, Tom’s not at all happy to be sent to stay with relatives in order to prevent him catching measles from his brother. His Uncle and Aunt live in what was once a grand house, now converted into flats, the remnant of former times being a grandfather clock bolted to the wall of the entrance hallway. However, it doesn’t take Tom too long to discover the clock strikes thirteen every night, and when it does something magical happens. He can enter a garden outside, but emerges in the past.

Philippa Pearce’s childrens’ novel was published in 1958, before inoculation, when measles was still all too frequently a disease that killed children, while three TV adaptations, a Jackanory reading and a feature film surely establish Tom’s Midnight Garden as a children’s classic. Despite the last of these being in 1999, they set the bar high for adaptor Edith (Grattery), but the result is glorious. To begin with she captures the essence of dull, 1950s suburban middle-class England, while Pearce supplies the stultifying attitudes and a child’s natural curiosity. As Tom explores the secret garden in the past, Edith’s art opens up. It looks tightly drawn, and is when it comes to people, but the flowers in the garden are crafted impressionism given solidity by colour. This is predominantly shades of green and russet with other colours used sparingly, but to considerable effect.

Tom enjoys himself in the garden, makes a friend, and although it’s understated, the experience is liberating not only from his measles confinement, but in a greater sense. Also well conveyed is the contrasting freedom of the garden with the structure indoors, where Uncle Alan has a rational explanation for almost everything, and dismisses anything that doesn’t conform. The wonder of the original story is that logic flies out of the window. Sometimes when Tom visits the garden his friend Hatty is an infant, at other times older, yet everything is meticulously and warmly tied up by an ending that adults will see coming, but children won’t. Edith also playfully toys with the adult audience, deliberately imposing a similarity between the features of one character and another to further blur the area between ghosts and dreams.

Because British children’s stories until the 1970s or so resolutely reflected white middle or upper class lives and attitudes, there’s now a tendency to reject so many of them as not being inclusive. There’s a truth to that, but equally a danger of throwing the baby out with the bathwater. Tom’s Midnight Garden features privilege, but it’s also a cracking story, imaginative and heartbreaking, and this adaptation is equal to it. It looks beautiful and will awaken the minds of a new generation. 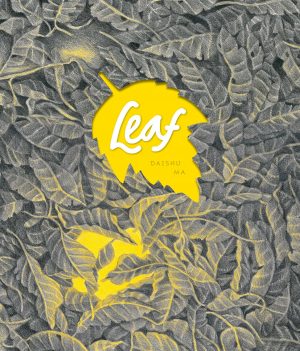 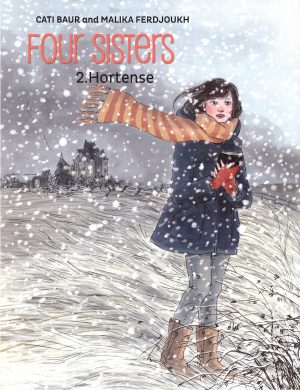