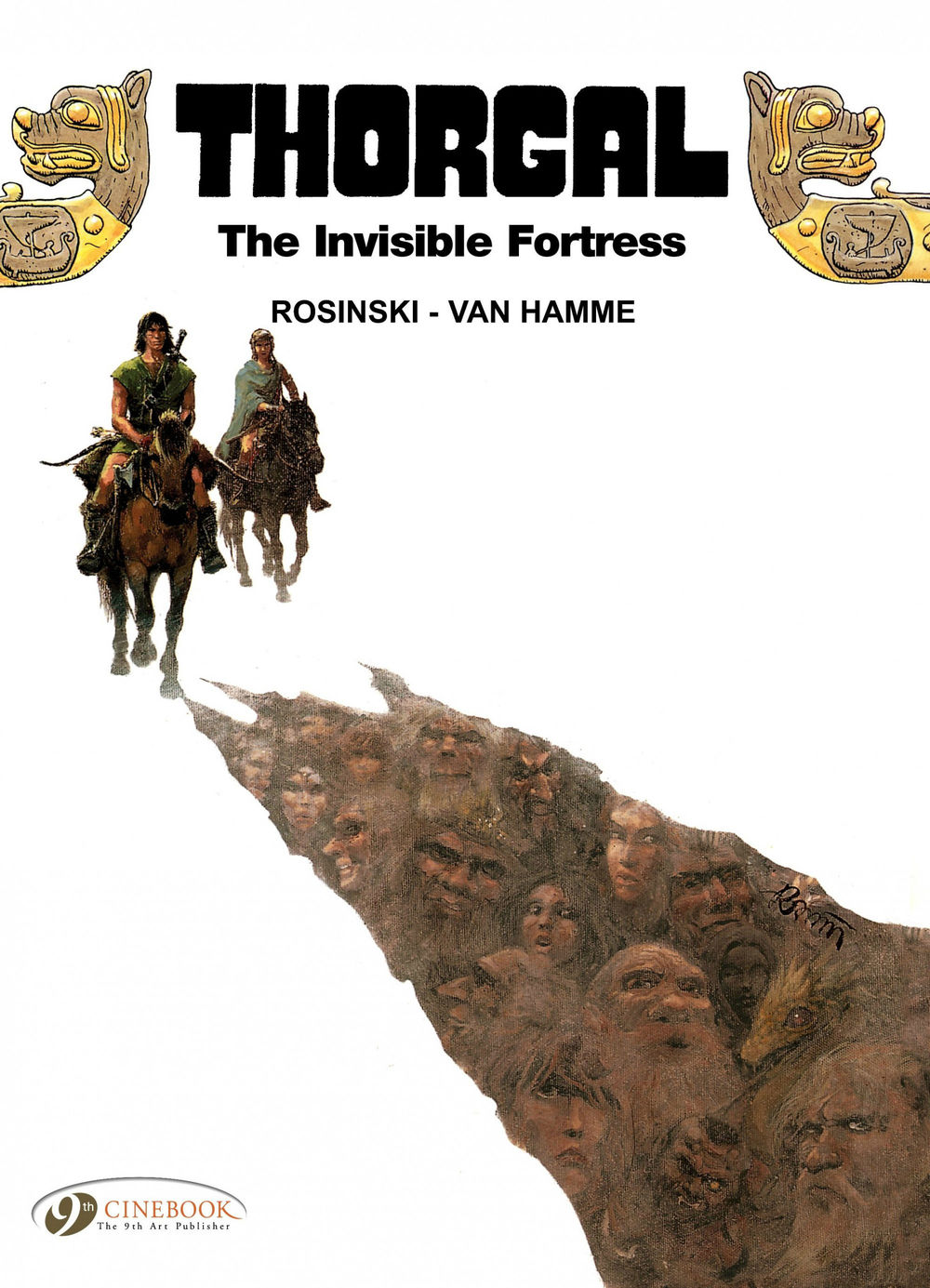 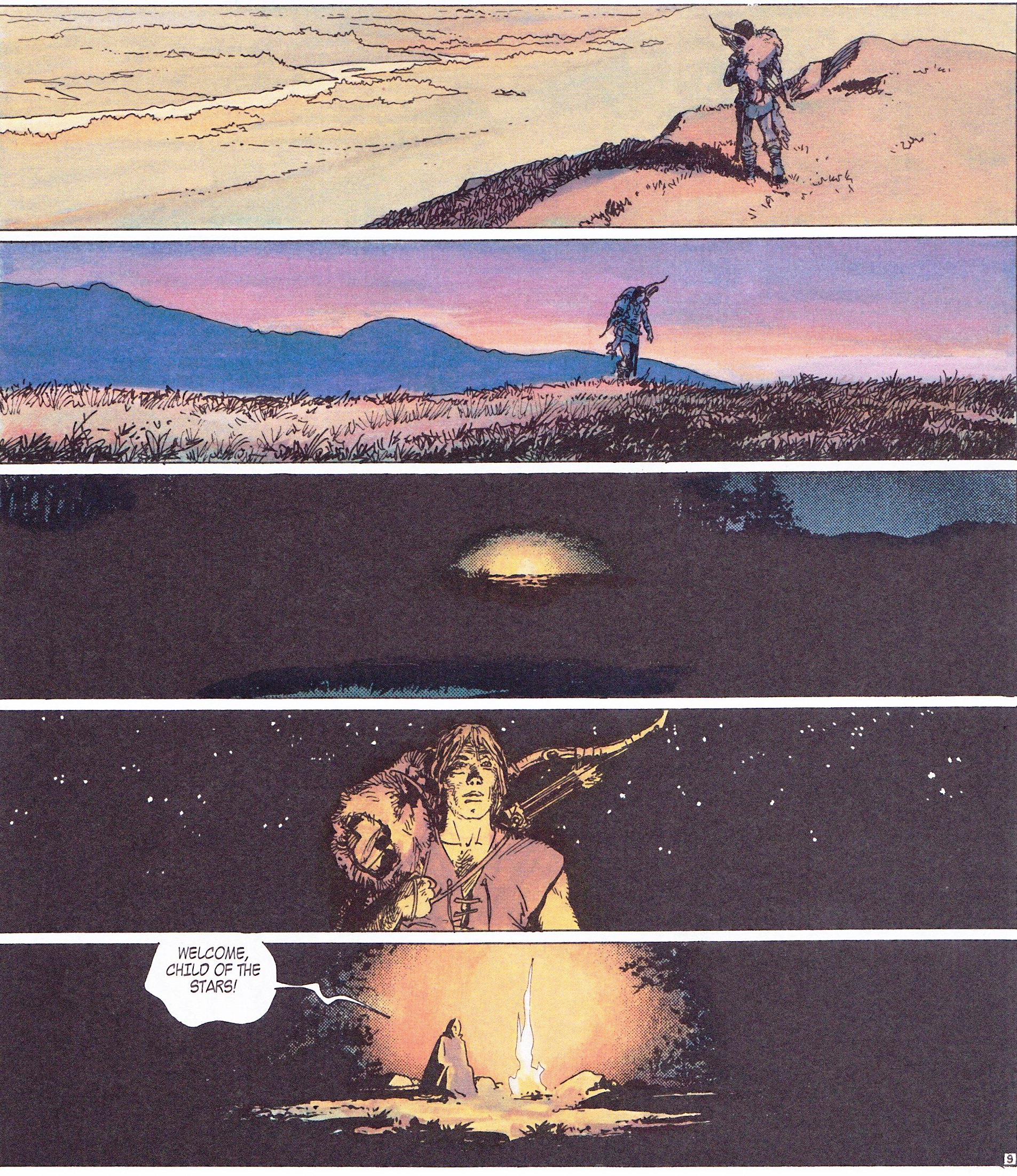 A running plot device of Jean Van Hamme and Grzegorz Rosinski’s series is that Thorgal believes he’s cursed by the gods. If you’ve read some Thorgal it isn’t difficult to understand why. Very few characters have exprienced what Thorgal has, nor as realistically as he has. He is physically and emotionally scarred by the treatment of men and the loss of his friends. Being a descendant of a space-faring race stranded on Earth, the gods resent Thorgal’s resistance to their whimsies and it’s this notion that led Thorgal to leave his family to protect them from capricious deities. The events of The Sun Sword reunited him with old adversary Kriss of Valnor, much to Thorgal’s distaste as any association with the beautiful but deadly Kriss is like flicking a snake on the nose. Sooner or later it’s going to strike and it’s not long before Kriss’ bloodlust gets the better of her. It not only puts Thorgal at odds with the fierce River Folk but leaves him stranded in enemy territory. Then he meets a mysterious seeress who tells him of a way to break the curse and return home. To keep his family safe Thorgal would give everything but is it worth the price?

Rosiński has provided all artwork for Thorgal since 1977, yet here for the first time a third party joins the creative team, Polish born Graza becoming the colourist. Rosinski can foster any environment with his uncanny eye for colour. He can present a fireside scene so that you almost smell the food on the table. In The Land of Qa you felt the cloying humidity of the jungles and the searing heat of the deserts, so apprehension that artistic standards will slip is understandable. The opposite proves true and Rosiński’s illustrations actually improve as he has greater time to spend on them. Drawings are more detailed, the line clearer and more refined. A scene featuring Thorgal’s enemies shows them drawn better than they ever were. The atmosphere as Thorgal walks across a plain to woody hillock in the twilight is surreal. Fight scenes, little gestures of the face or hand, all better and more fluid. Nudity features in the earlier pages and how it’s handled is both strange and impressive. On one hand its like those films where all nudity and innuendo is edited out by a strategic placement of fruit. In this case it’s a weapon or a braid of hair. The scene itself features an assault on a bathing woman, so this technique threatens to rob the scene of it’s dramatic impetus, yet the result is a scene remaining within the boundaries of good taste but also unsettling.

Van Hamme scripts some fine developments that are thrilling, heartrending and disturbing. The Invisible Fortress is a cerebral and mystic story. It explores more of Thorgal’s emotional complexity and what makes him tick, and as such is initially very confusing, the puzzling symbolism distracting the reader. The power of the device is only clear at the end, revealed in a finale that manages to pull the heart strings and stoke anticipation for future tales.

The Invisible Fortress has more emotional heft than you realise. It sneaks up and sucker punches you, but knowing what’s ahead makes for an enjoyable second reading building appreciation for the finer plot nuances. Plenty of action, intrigue, and beautiful art make this a pleasant read. In The Brand of the Exiles, Thorgal’s family face the reality of life without him.