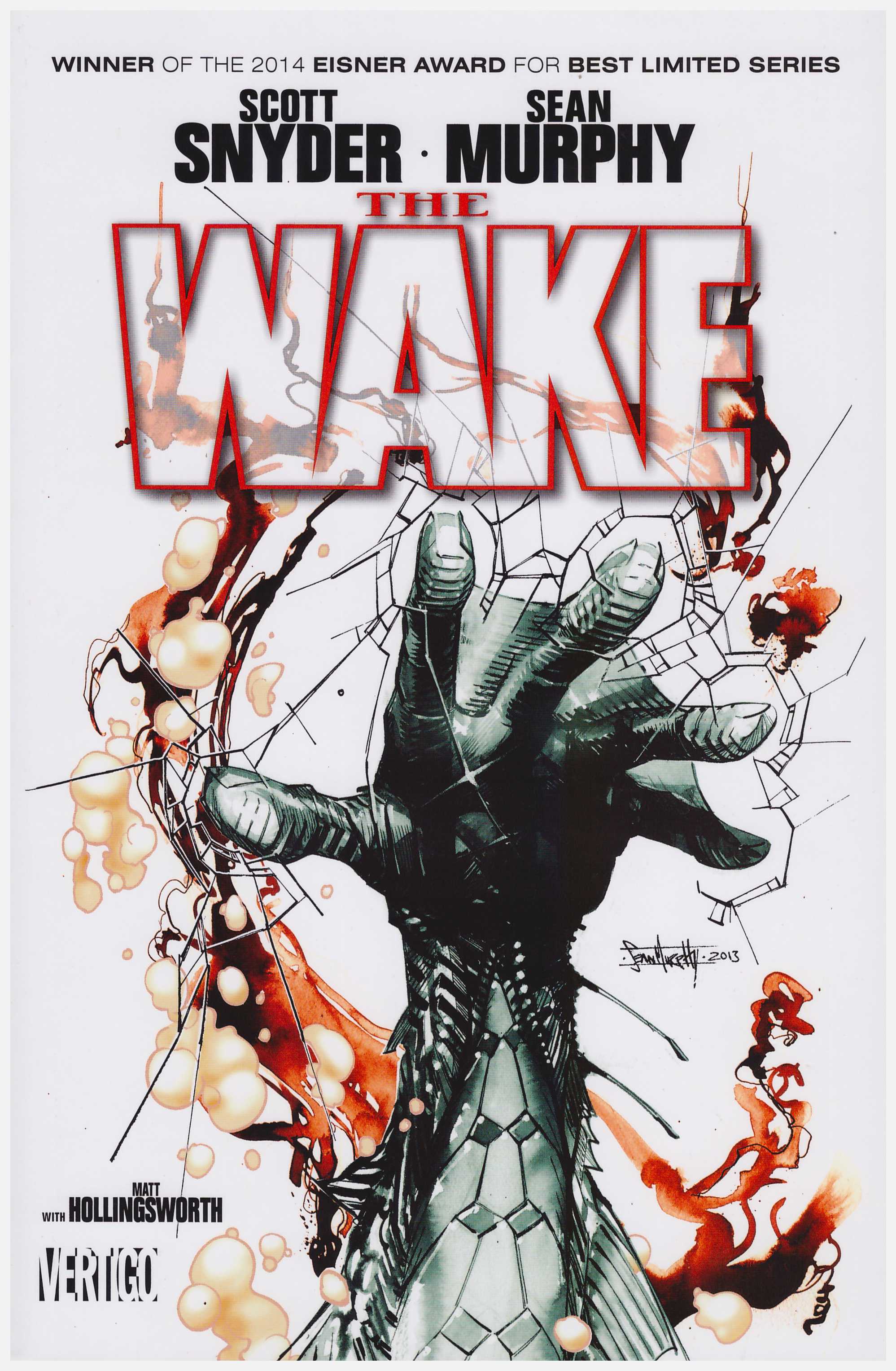 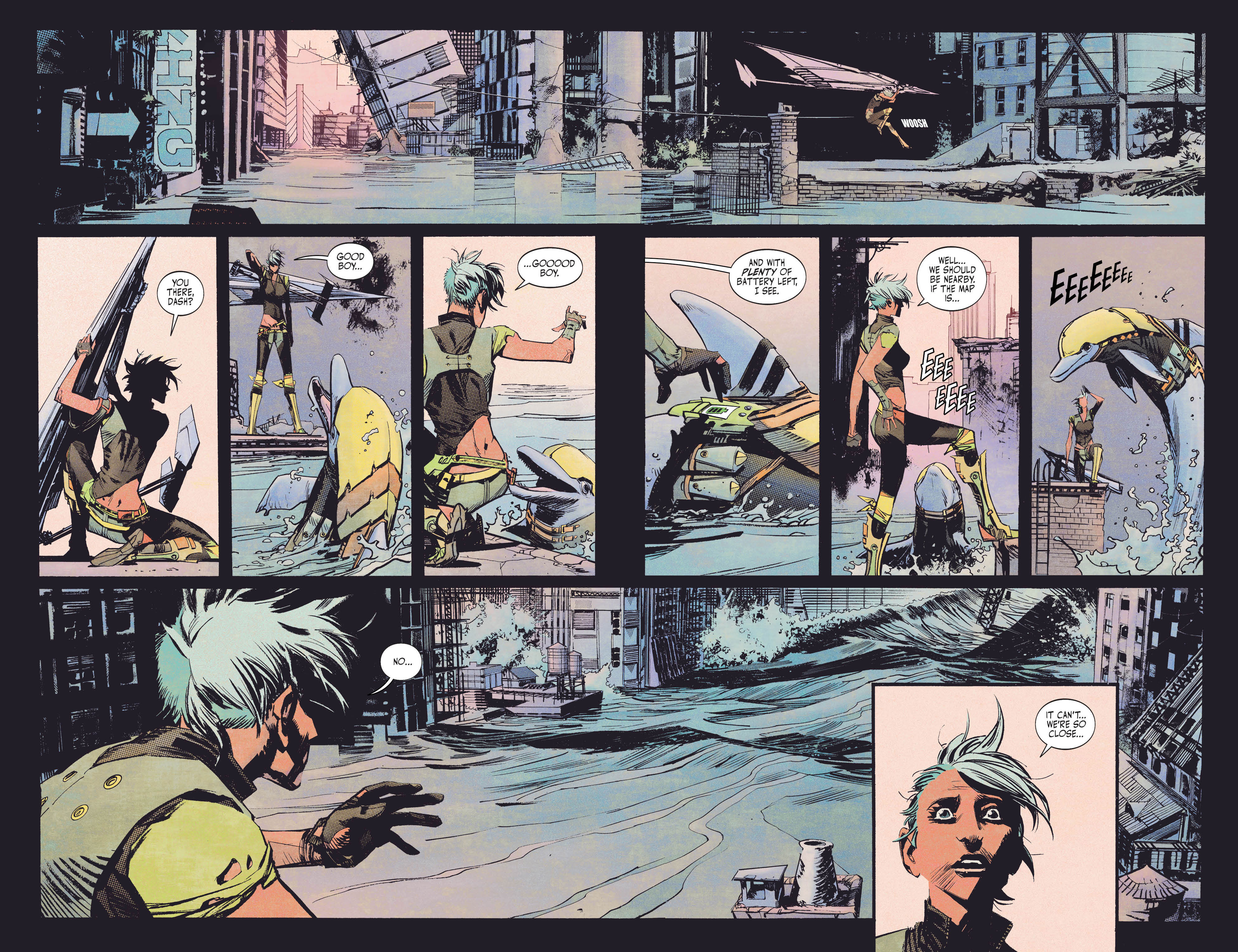 When Scott Snyder was pitching this he probably only required the single sentence: “Aliens undersea, then we’ll fix Waterworld”. That would be achievement enough, but The Wake is far more right from the starting point of its clever, layered, title.

We open with a strange scene of a green-haired woman gliding above a flooded city while a dolphin with which she’s in communication swims below. It remains a teaser until midway through this story, which is defined by two communications from the deep.

The opening half of the book follows Dr Lee Archer, an oceanographer specialising in undersea communication. Having deliberately severed all connections with the government agency that previously employed her, she’s surprised to be asked back, but assertive in refusing: “I don’t care about reinstatement or my reputation with your deaprtment”. The authorities, however, have ways of assuring compliance, be they carrot or stick. Their concern is unidentified sounds from deep beneath the ocean, and Archer is co-opted onto a team of assorted specialists confronted with something previously hidden from humanity. That situation rapidly spirals out of control, resulting in global changes.

From the midway point our focus is Leeward, the green haired woman of the opening sequence. She’s fiercely independent, and has grown up in a very different world two hundred years later. The ocean has reclaimed a significant portion of land, fresh water is at a premium and the previous social systems have devolved.

Wake is a fantastic story. Every time you think you’ve figured something, Snyder switches tack and a whole new set of circumstances prevails. He’s consistently imaginative, sometimes throwing away viable ideas in passing captions, tackles some weighty subjects, and sustains the wonder and intrigue before falling at the final hurdle.

The problem with the ending is that Leeward achieves something against pretty impossible odds in a fashion that’s all rather too easy and convenient. Despite an earlier scene contextualising the conclusion by referring to the raindrop effect rippling out, there’s a sense of little having changed by removing a single person’s influence. The optimism presented is at odds with the number of allies that person could call on. If it disappoints, it’s not in a manner that negates the remainder, as the journey has been worth the price.

Sean Murphy is a consistently stunning artist. He’s not afraid of a bit of work to create a convincing locale, and if the persistence in applying what appears to be tribal scarring of parallel lines to people’s noses is misplaced, it’s a small price to pay for such a gloriously designed cast. In order to pack as much as possible into his pages, and accurately reflect the passing details in Snyder’s script, Murphy frequently resorts to montage illustrations. While not colouring the work himself, he referred colourist Matt Hollingsworth to Hiroshi Yoshida, and suggested a similar colour scheme. The result is gloomy and slightly dulled, suiting the atmosphere.

Oddly, with the issues given an airing, there’s a similarity to some aspects of the French series The Chimpanzee Complex, although the overall mood is far more riotous.