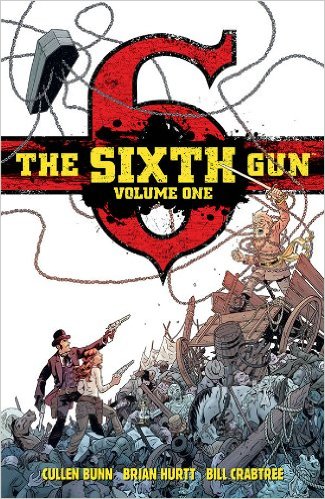 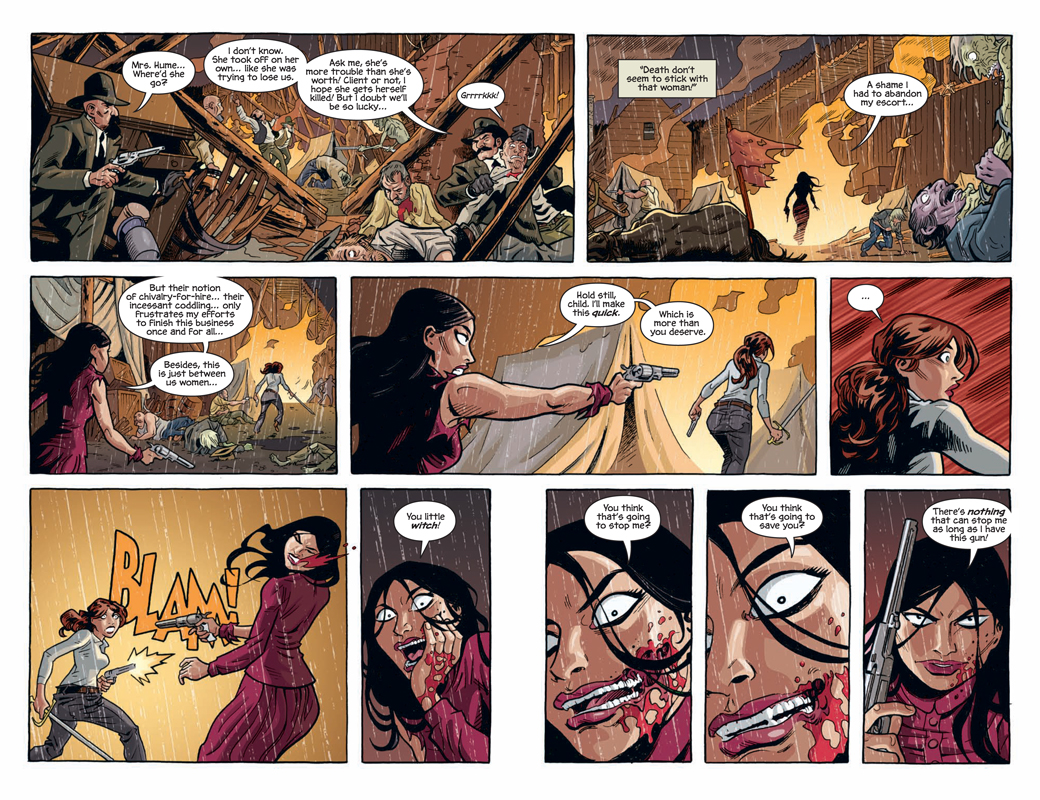 The graphic novel format always provides fertile ground for genre mashups, and Cullen Bunn’s The Sixth Gun blends western and horror tropes seamlessly to produce an entertaining and unholy union, a veritable marriage made in Hell. This brings together the first two story arcs, and introduces us to the key characters and the mythology of the titular six guns: supernatural weapons of mass destruction that bond themselves to their owners and could serve a higher, potentially apocalyptic role akin to Hellboy’s Right Hand of Doom.

Bunn’s tale purveys a sense of the epic and is peopled with a menagerie of heroes and rogues, though the line dividing the good from the evil can be tenuous, especially in the case of central character, Drake Sinclair, a gunslinger with a shadowy past and shady motivations. It takes a while for the reader to determine whether he is a force for good in the story or someone much more sinister. The archetypal ingénue of the story (and our guide to the mysteries of this Weird West) is Miss Becky Moncrief who becomes bonded to the sixth gun itself, the most powerful of the weapons. The cost of wielding the weapon is her innocence and Bunn quickly evolves her character from naïve girl to the moral compass of the story, a woman burdened with a curse that only death can nullify.

Well drawn as the heroes are, Bunn’s rogues’ gallery is where this book truly strikes gold. Centre stage towers the undead Confederate General, Oliander Bedford Hume, a chainbound entity so driven and evil that even death cannot stop him. Missy is the revenant’s partner and vicious equal in every way. Hume’s Four Horsemen, all wielding one of the mystical weapons, are fascinatingly corrupt creations, each well worthy of his own series. The conflict between the two sides drives the narrative in a satisfying manner and highlights Cullen Bunn’s bravura storytelling skill. This graphic novel provides an embarrassment of riches.

This oversized edition, complete with gallery and an additional prose story, is a gorgeous introduction to Bunn’s collaboration with Brian Hurtt, whose art captures the Wild West mise-en-scene with skill and style as he conjures up a range of well realised characters and settings. The world and mythology that it introduces manage to be both familiar and original, tropes and traditions reinvented to produce a new confection, a treat for any reader who wishes to saddle up and venture west into dark and unknown territories. The Sixth Gun has a dedicated following, and a pilot TV episode has been filmed. It is a tale that deserves to be appreciated by a wider audience, who should accompany the heroes and villains for a satisfyingly wild and unpredictable ride into volume two.