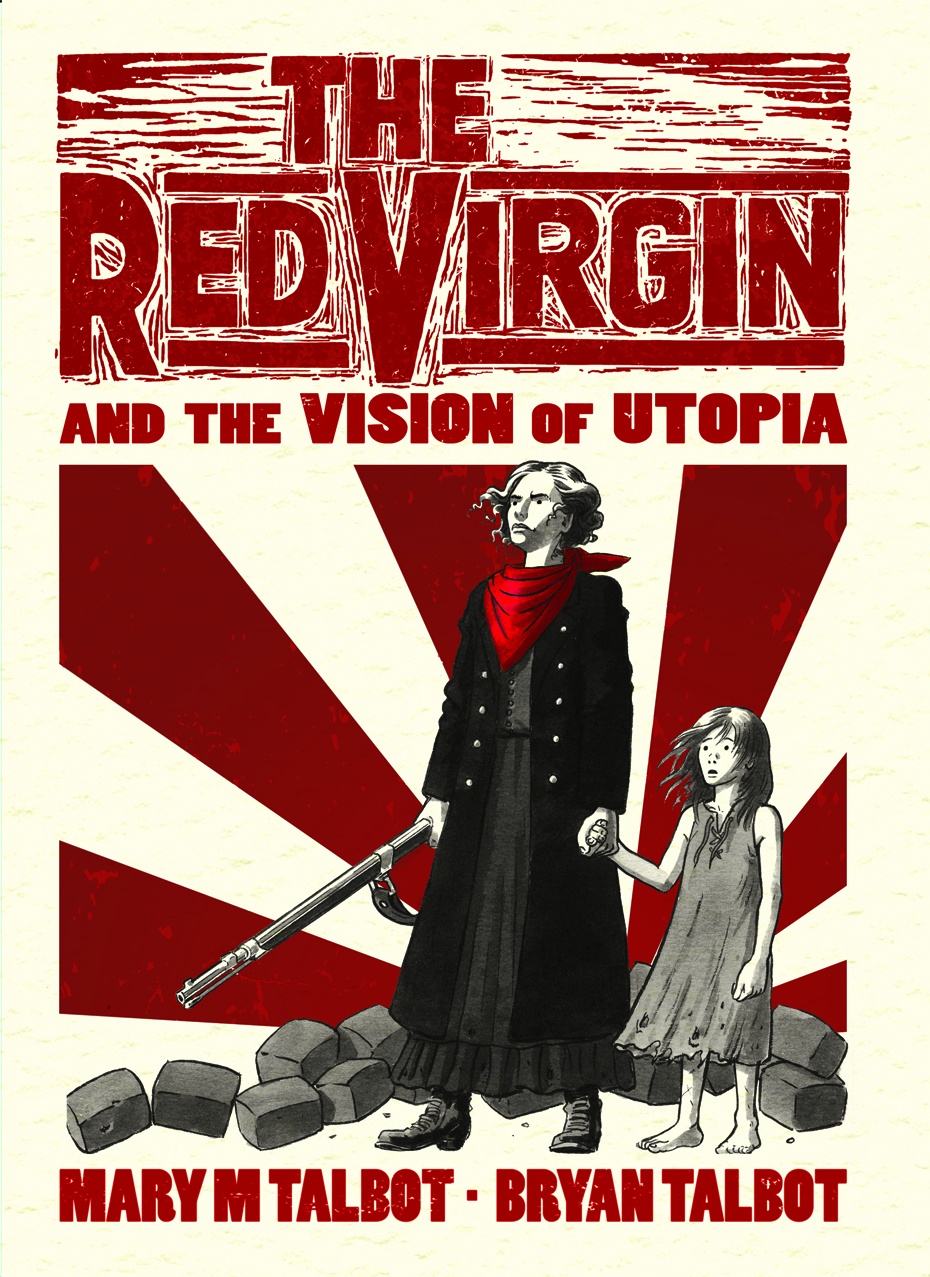 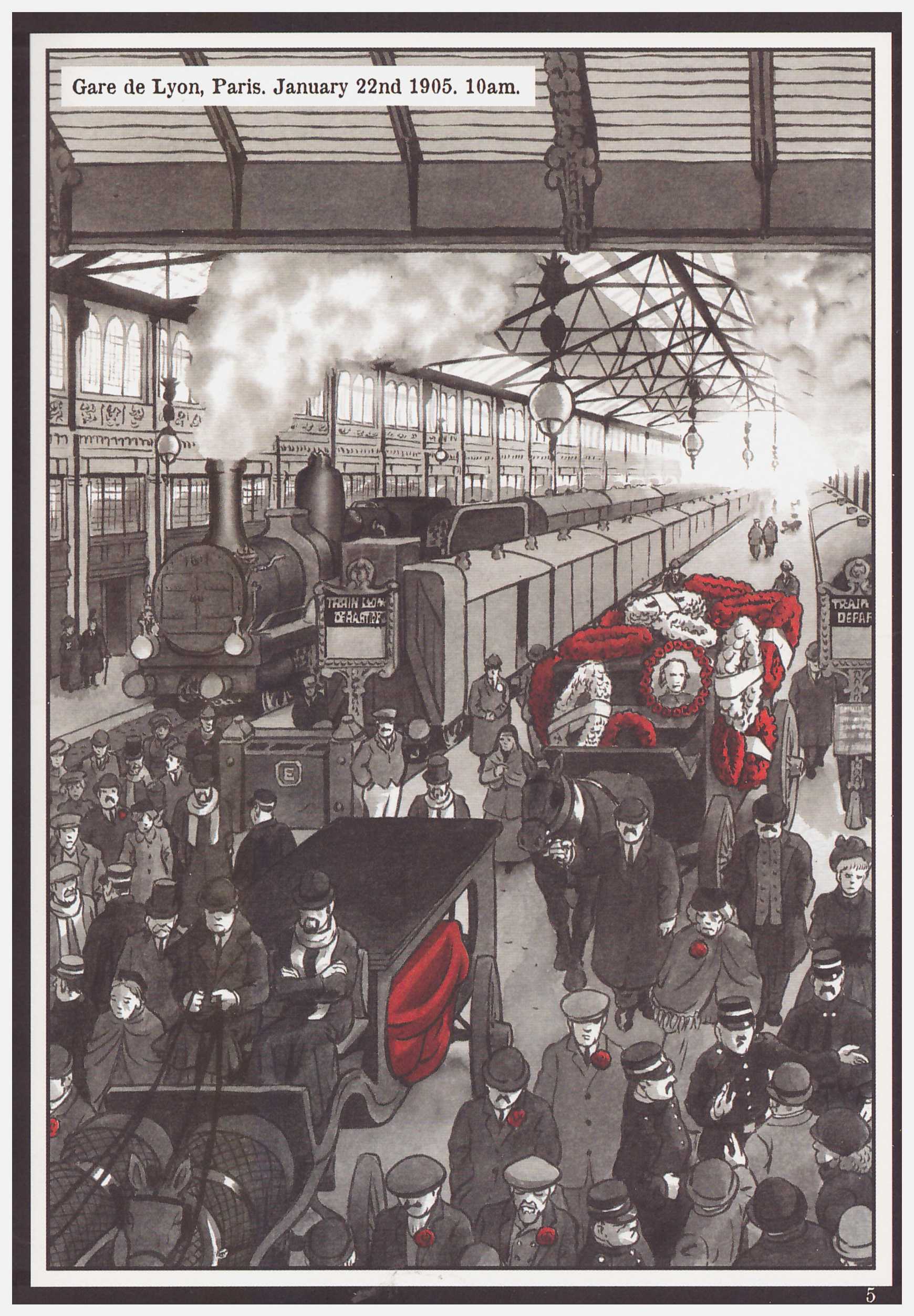 The two previous collaborations between academic author Mary M. Talbot and her artist husband Bryan have been unqualified successes, but The Red Virgin doesn’t quite match them.

Their subject Louise Michel lived a life that demands to be more widely known. She was a fascinating, visionary, committed and influential woman, yet a century after her death recognition hasn’t really expanded beyond her native France.

She solidified her revolutionary principles during the Prussian occupation of France in 1870, becoming very active in the brief-lived Paris commune of 1871. Its ten days and horrific aftermath were the events that would shape her life. Exiled for a considerable period thereafter in the South Pacific island of New Caledonia her sympathies remained with the oppressed, regardless of race, which was almost unheard of at the time. The long journey there shifted her views from socialist to anarchist.

Bryan Talbot is quite the chameleon as an artist, the figures recognisably in his style, yet that style subdued to convey a tragic history. He’s excellent at portraying emotion, with a dip of the eyes or a quizzical glance, and his 19th century France is convincing. A sparing use of a single colour to contrast the black and white wash art is extremely effective. Red colours revolutionary flags, soldiers’ uniforms, fires and the flowers on funeral wreaths, here a pencil there a hat and the scarf Louise wore. He creates a convincing claustrophobic world for Louise, the packed houses and cramped streets perhaps representing the enclosure of her ideas, but occasionally expands into a gloriously detailed scene of village life or the late 19th century construction of the familiar Paris.

The Red Virgin is at its best when focussing squarely on its subject, of whom a vivid picture is painted, her passion and intensity captured, but in moving beyond it becomes troublesome. The main story is interspersed by moments from the visit of prominent American feminist Charlotte Perkins Gilman to Paris as Louise Michel’s funeral is held in 1905. A stilted, expository quality characterises a fair portion of the dialogue from these sequences, which name drop other prominent individuals of the time, as if conversations are for the reader’s benefit rather than flowing naturally. The skimming stone approach taken to relating Michel’s accomplishments distracts rather than informs, raising more questions. Most inexplicably, having chosen the title, the book lacks any explanation of the term ‘The Red Virgin’ or how it was endowed, beyond never specifying romantic involvement of any kind. The narrative is also puzzlingly framed by Franz Reichelt’s unfortunate parachute demonstration from the Eiffel Tower in 1911. Any meaning or comparison to be drawn from this isn’t obvious. This is despite the welcome and copious page annotations at the end of the book offering additional enlightenment regarding other matters depicted.

Louise Michel’s writings, ideas and fame continued to spread after her death, and numerous places now bear her name, including a Parisian Metro station and at least 160 schools, and her inspirational life is one that deserves wider international recognition. This is graphic novel is a starting point.