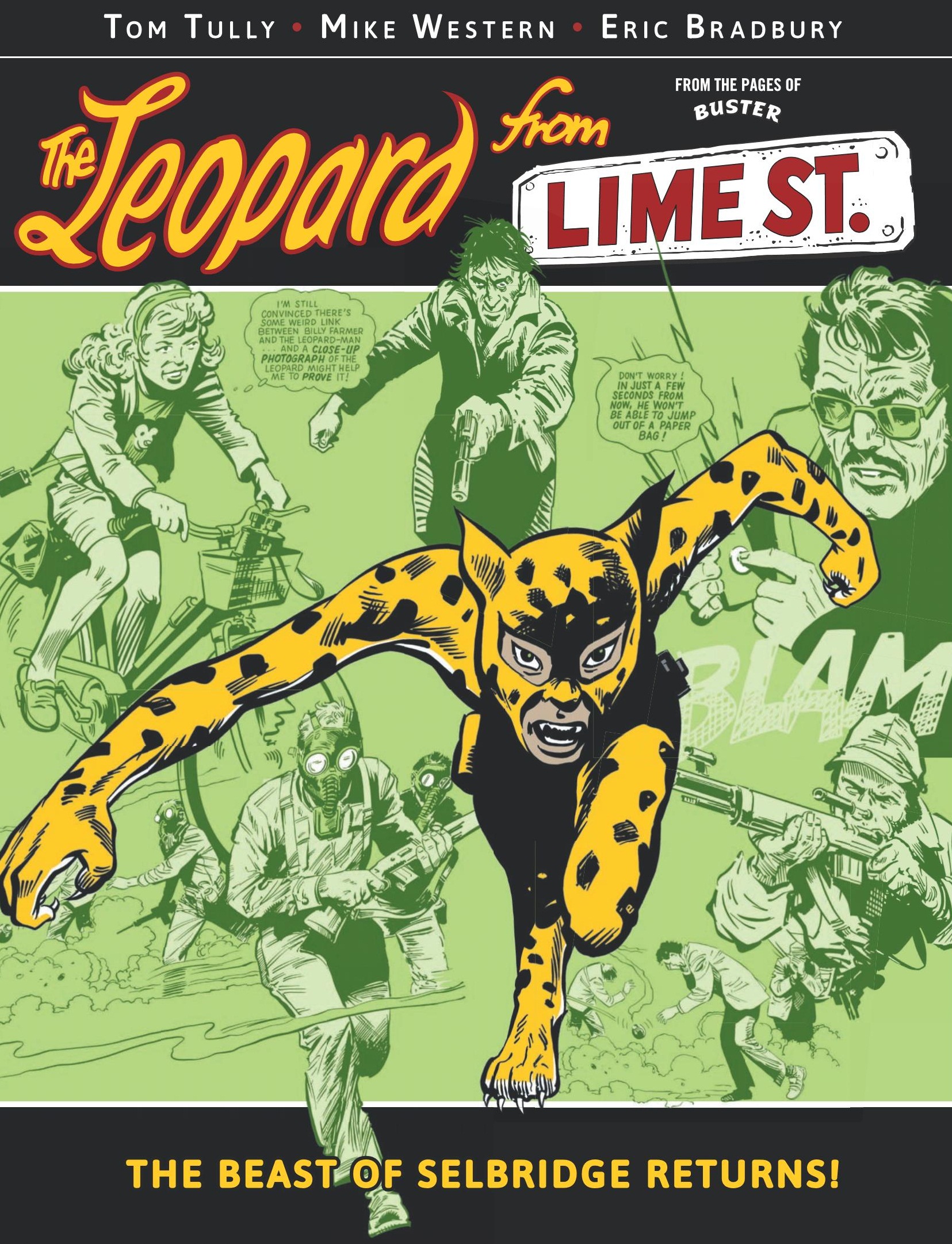 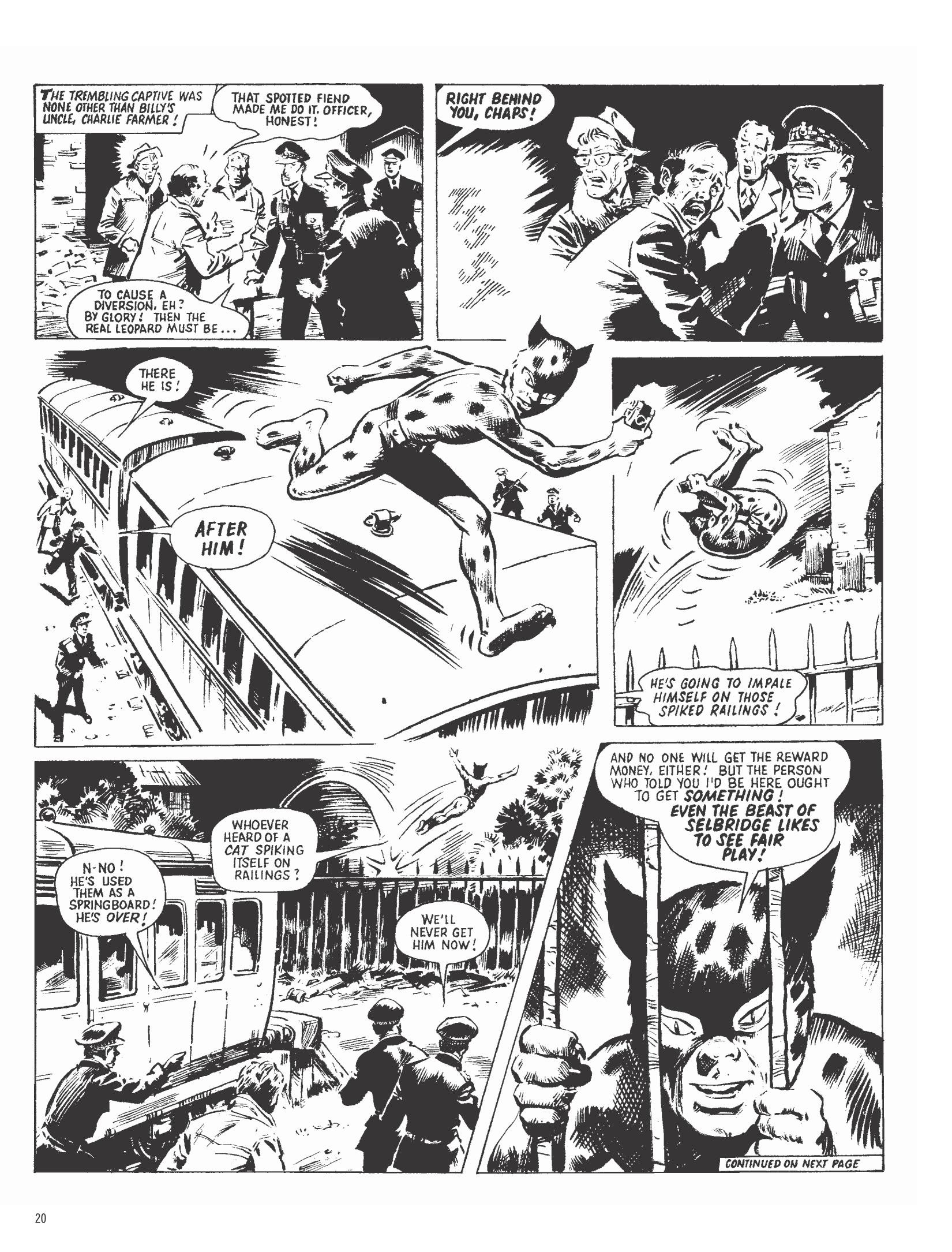 Plucky orphaned teenager Billy Farmer was clawed by a leopard being dosed with an experimental serum, and after recovering he found himself stronger and more agile. In deference to how this came about he designs a leopard costume and fights crime, taking pictures that can be sold to the local newspaper in suburban Selbridge. However, try as he might, the local paper keeps portraying him as a menace. The 1970s were a little lighter on lawyers on the prowl for derivative content, so Tom Tully’s altrernative suburban British take on Spider-Man had a far longer shelf life than anyone might have assumed from the pastiche premise.

If Tully hadn’t added to the concept it probably wouldn’t have been so fondly remembered, but he constantly comes up with melodramatic twists to keep Billy skint or hunted. Written at a time when a graphic novel couldn’t have been conceived, Tully plots to formula and the year or so of continuity over three page episodes displays considerable repetition. Tully, however, plotted on the basis that readers picking up a comic in October were hardly likely to have remembered February’s strips from long discarded or traded comics. He’s also not above using what all these years later are tired clichés such as Billy being captured, but it’s all been a dream. Unlike kindly Aunt May and deceased paragon of virtue Uncle Ben, Billy has sickly Aunt Joan and lazy and brutal Uncle Charlie as role models, and there’s no shortage of other thugs willing to lay hands on children – very different times.

With Mike Western providing layouts and Eric Bradbury finishing the art there’s a liveliness and refined technique to every page. It’s the art that goes a long way to establishing the costumed Billy as a credible character, with a lot of panels packed into three page episodes, all fully detailed with background, and the artists good with the motion needed for Billy’s gymnastic displays.

The threats head thick and fast in Billy’s direction from a shabby circus to a school colleague sure he’s the Leopard Boy, as Tully resorts to the tried and trusted again and again, with an unfeasibly high number of criminal incidents occurring in Billy’s vicinity. However, Tully has one great writer’s strength. No matter how daft the plot may be, he always provided a good cliffhanger to ensure the readers of 1975 would be back the following week to see what happens. The simplicity with which Billy extricates himself to allow for more story over those next three pages is also admirable.

Midway through the book the stories become longer, presumably because the feature was then no longer in danger of being axed with little notice, but it makes no fundamental difference to Tully’s approach of weird traps and fantastic escapes. Signs of the times are plentiful – would a villain proudly call himself Nipper Nimmo these days? – but the strong sense of Billy being in a time and place, for which Western and Bradbury deserve a lot of credit, cements the strip as entertaining. There’s no pretending The Leopard From Lime Street hasn’t dated, but any set of strips providing a compete story read individually still pulls you into the exploits of a likeable lead character. 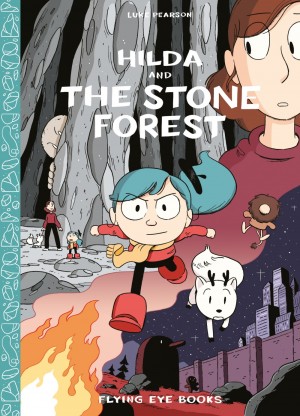 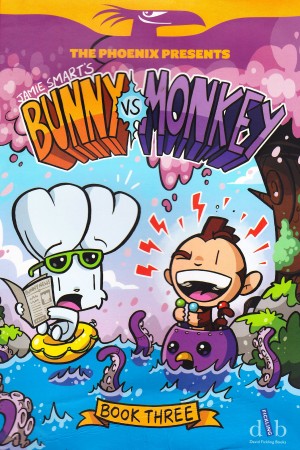 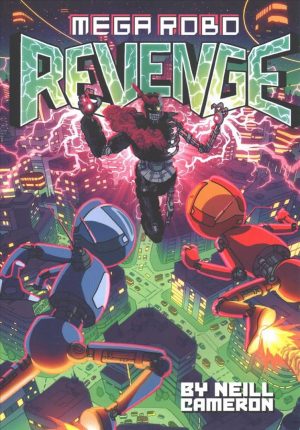 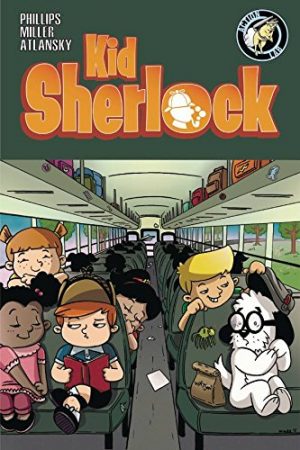