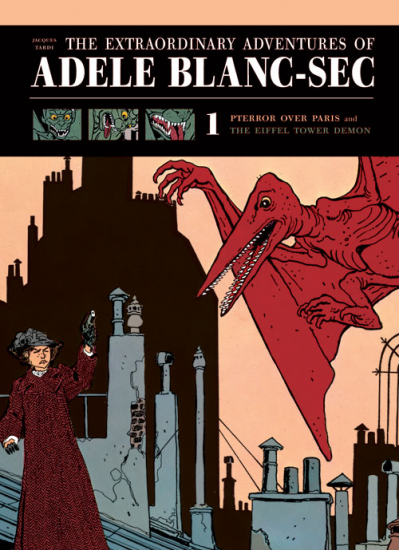 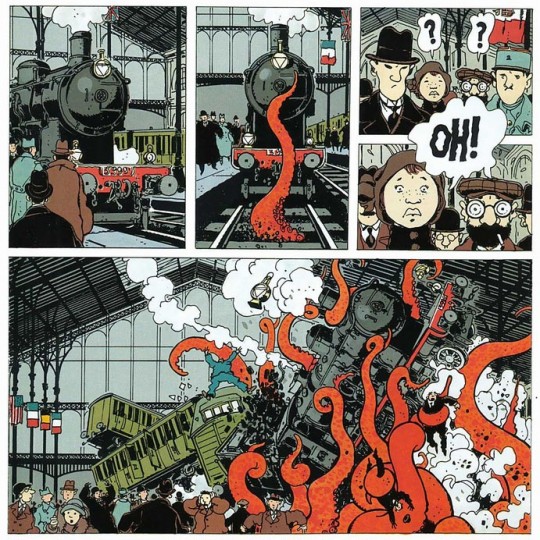 Jacques Tardi’s extraordinary Belle Epoque sleuth, Adele Blanc-Sec, began life as the villainous foil for another of Tardi’s lady detective characters, which explains her somewhat amoral attitude at the start of this long-running and much loved series of camp adventures.

In creating the series Tardi deliberately set out to introduce a different kind of heroine, not innocent, not sexual except on her own terms, both clever and clear-headed, whose adventures parody the Edwardian derring-do of Rider-Haggard and H G Wells. Full of supernatural and scientific malarkey, they look towards steampunk.

Hot on the heels of Luc Besson’s filmic adaptation Fantagraphics’ first volume combines two of the original editions to give the reader a complete story arc, although in typical adventure style there are always a few teasers for the next volume at the end. These are quality hardbacks, reasonably priced, and featuring that most priceless of gifts, a translation sensitive to the original done by someone who gives a damn (in this case Kim Thompson). If the first story, ‘Pterror Over Paris’ has a fault it’s the amount of expository dialogue at the start, as Tardi rushes to establish his main characters and setting. Thompson deals with this, and the various accents and dialects Tardi employs, very well, and once the story gets going it’s a complete and delightful romp.

Adele Blanc-Sec arrives in Tardi’s opulently-envisaged Paris with a trunk containing a woman she has kidnapped, aiming to free a thief wrongly accused of murdering a banker, by any means necessary. At the same time a rogue pterodactyl hatched from a fossilised dinosaur egg starts menacing the city and a bombastic big game hunter is on its trail, while two mad scientists attempt to control the beast telepathically and capture it first. Adele’s plans and those of the pterodactyl hunters soon become entangled, and she is approached by a mysterious detective who wants her to steal a statue from the estate of the dead banker.

Tardi’s plotting is very complicated, and his artwork very simple. Most of the time he sets his action in the middle distance, saving close up panels for moments of particular drama or tension. He draws figures face on and uses minute differences in line quality and positioning to express emotion, which enables him to show us the many moods of his fascinating and tight-lipped heroine.

Her first four adventures were also published as individual volumes by NBM, based on the Dark Horse serialisations in Cheval Noir. There are two further volumes from Fantagraphics, The Mad Scientist and Mummies on Parade and The Secret of the Salamander and The Two Headed Dwarf, both highly recommended.