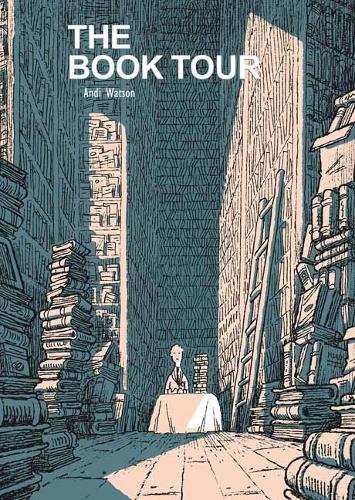 Some might need their egos fed at the sight of the queue, but authors of blockbusters rarely go on signing tours. It’s the middling author in need of a bit of a push who’ll generally turn up in the bookshops outside the major cities, and such is G.H. Fretwell, embarking on a signing tour for his new novel Without K.

As a creator with an extended career, Andi Watson’s presumably experienced a few signing sessions over the years, and funnels in all the depressing experiences he’s stored from them. Fretwell’s traumas begin when his own stock of books is stolen shortly after arrival. From then on almost anything that can go wrong does go wrong. Booksellers don’t stock his book or can’t find it, hotel rooms need to be changed, and the publisher keeps extending the tour yet can’t be contacted, so by halfway that book theft seems a triviality as mishaps and miseries accumulate. By far the worst of them is that he’s the last person known to have seen a missing woman, and the police are taking an interest. The author’s name indicates someone to be put upon, and Watson has little sympathy as the indignities continue, each new setback met with a puzzled acceptance by Fretwell.

Gloriously simple, polished and retro-styled cartooning accompanies what’s set in a time pre-dating mobile phones. Fretwell wanders through beautifully recreated mixed period architecture, in narrow streets, some cobbled, evoking a European neverland, instilling a sense of grandeur to accompany his continuing downfall. Every innocent mistake he makes is calculated by Watson to drive him further downward, his signings and accommodation never working as planned, yet each delivering another person whose behaviour straddles the line between eccentric and deranged. Many are attempting to apply order through routine and administrative practice, as if sucking their needs from Fretwell as his previously orderly existence disintegrates, sense at a premium.

The Book Tour is a knowing graphic novel. Kafka is evoked on the back cover blurb, and Watson effectively manifests the mood of the innocent enveloped in sinister circumstances well beyond their control. The cultivated unease is heightened by Fretwell’s casual acceptance of his circumstances, resulting in bleak comedy, as Watson’s long worked out the point when some books will actually be signed. He ends with a final laugh at his readership rather than providing it for them. Are we supposed to have followed clues also? Probably not, but as you’ll be reading The Book Tour again, why not play detective second time around?