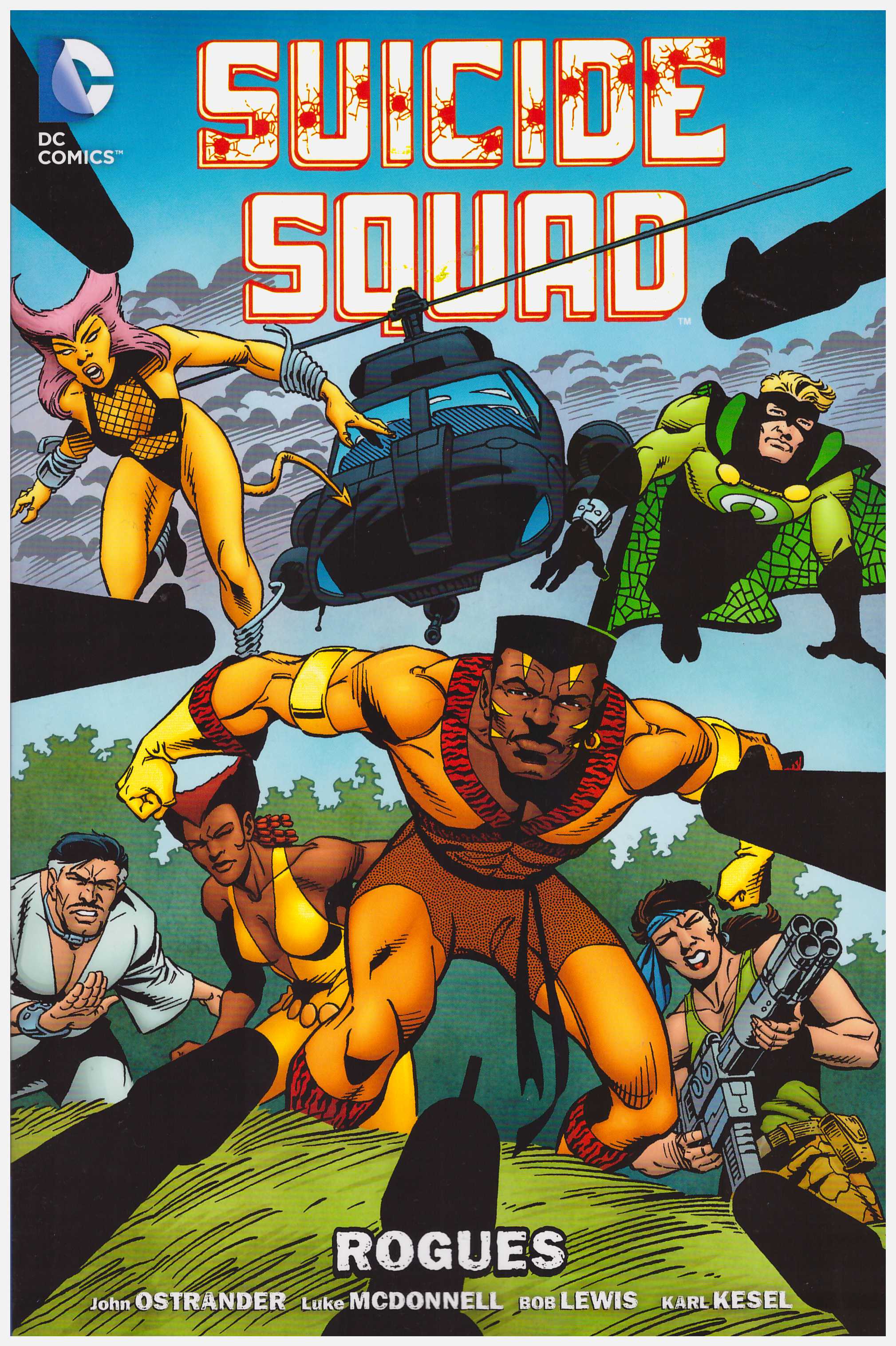 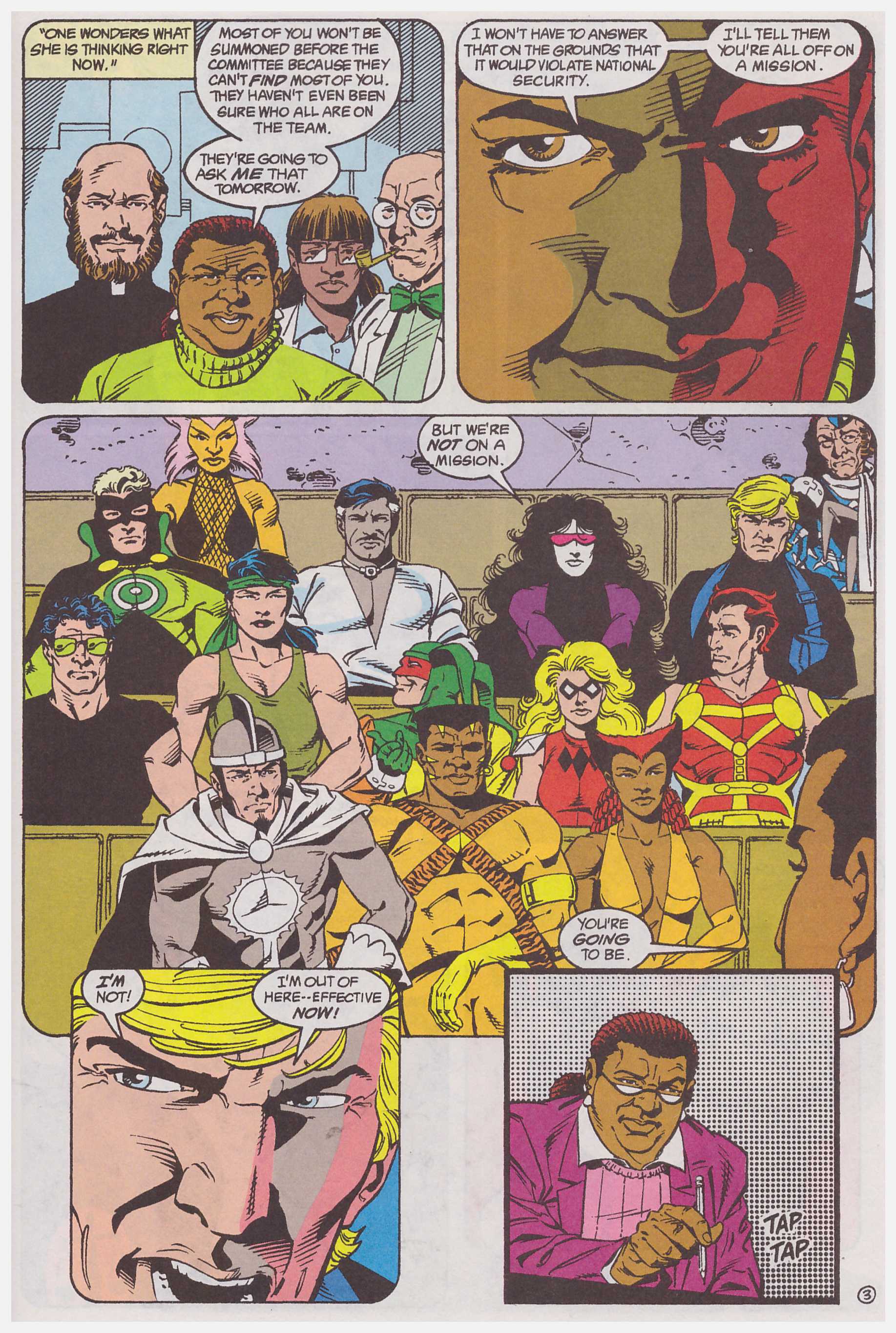 Rogues begins the run of stories where writer John Ostrander (occasionally assisted by Kim Yale) really hit his stride on this 1980s version of Suicide Squad. A not entirely successful leap into science fiction closed The Nightshade Odyssey, but from this point it’s action-thrillers all the way, which plays to Ostrander’s strengths in creating unpredictable page-turning plots. He’s established a strong ensemble cast, both costumed and otherwise, and there’s a political underlay to the entire book.

With the return of the Jihad, who the Squad faced to open their series in Trial By Fire it’s almost hitting the reset button, but the undercurrent running throughout is the threat of revelation. The appalling, yet narratively appealing Amanda Waller heads a deployment agency sending a squad comprised primarily of costumed criminals supposedly serving jail sentences on covert missions. The possibly distasteful series title represents their chances of survival. While politicians are happy to sanction the project, they fear public reaction should it be known that criminals are in effect being freed. If they survive, that is. Some politicians, however, are prepared to manipulate the knowledge for greater power.

While that dilemma bubbles under until the final chapters, the squad are sent on missions to rescue a nun in North-West Africa, are involved with another covert agency and a couple of members have gone rogue. For all his fondness for certain cast members, by the end of the book Ostrander has ensured the Suicide Squad’s line-up differs greatly from the starting point. He also focusses on the non-powered support staff, and there’s a particularly good character-based chapter spotlighting most individual members at a couple of pages each. While a few cast members are lost in the shuffle, Shade in particular, others really shine.

If there’s a single character who qualifies as a rogue it’s Captain Boomerang, portrayed extremely well throughout the series. Ostrander’s well aware of his ridiculous aspects and plays them up along with his Australian terminology, yet also ensures we realise this is not just comedy relief. Boomerang is a misanthropic and bigoted thug who bears a grudge and can be very dangerous. It’s already been established that he’s using the identity and equipment of former friend Mirror Master to commit crimes while seemingly harnessed, and that plays out well. It also highlights an appealing aspect of the writing, when what appears to be a throwaway prank becomes very dangerous down the line.

There’s also a solo chapter for martial artist Bronze Tiger, originally commissioned as part of a tryout programme for new talent. This must be Peter Krause’s earliest published art, but it’s writer Larry Ganem’s sole credit. It’s a strip that works as a tryout without ever thrilling.

Almost all the remaining art is by Luke McDonnell whose layouts lack dynamism by today’s standards, but there’s never any doubt as to what’s going on and his continuity is easily followed. He’s very solid overall. Grant Miehm’s work on the closing chapter is cramped and exaggerated in comparison. Keith Giffen also supplies art for a good, but brief, character strip focussing on Waller.

Rogues still stands up as a diverse collection of well-plotted character-based action thrillers, the undercurrent a brooding malevolence rather than the overt violence of 21st century series. Next it’s The Janus Directive, a crossover involving characters from other contemporary titles.