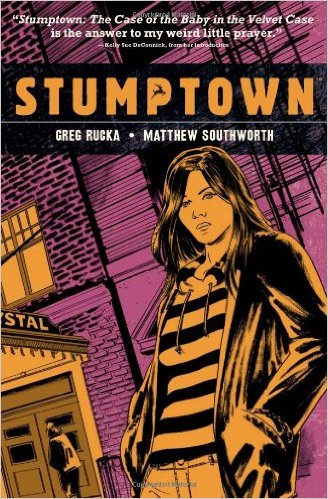 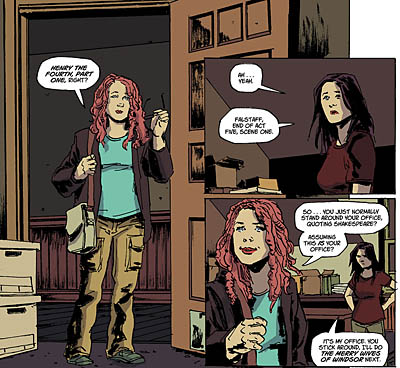 Dex Parios, the charmingly shabby private eye at the centre of Greg Rucka’s Portland based series, Stumptown, returns for a welcome second outing. While some detectives find themselves embroiled in cases of epic and life changing impact, Dex deals with everyday, mundane situations that often tumble quickly out of control. In this volume the titular baby in question is the beloved guitar of rock star, Mim Bracca, the central protagonist of Rucka’s prose novel, A Fistful of Rain. This electric maguffin sucks Dex into an enjoyably kinetic whirlwind of DEA agents, dealers, neo nazi skinheads and a thrilling car chase in pursuit of the missing item.

Dex is a fascinating character who anchors this small-scale case perfectly. Mirroring the first volume, we get momentary, but intriguing glimpses into her back story, though Rucka is clearly in no rush for any revelatory exposition. He imbues Dex with such good heart and such bad luck that she is hard not to love, with her flaws worn so decoratively on her sleeve. She is witty and intelligent, defined by the heroic (if self destructive) inability to walk away from a case until she finds the truth. The story itself is very entertaining, dropping Dex into a number of perilous situations that call upon her ingenuity rather than brawn to escape. The mystery itself is intriguing and plays out satisfyingly. Rucka is skilled at crafting believable relationships and Dex’s interactions with others have the ring of truth to them, from the sweet but un-sentimentalised, un-patronising moments with her Downs Syndrome brother to the bickering antagonism with an over testosteroned female DEA agent.

Matthew Southworth shares full credit with Rucka in his realisation of Dex’s Portland tale. His layout and panel design for the high speed car chase are inventive, and boast a visual and red-blooded quality very hard to capture on the static page. Rucka and Southworth harmonise tunefully in a story that depicts the world of rock music and its seamier underbelly.

Rucka has cited the iconic Jim Rockford from the 1970s television series The Rockford Files as one of a number of inspirations for Dex and her adventures. This shows in the dogged, humane determination of the character to get to the bottom of any case, no matter how bruising the outcome. This second installment of Dex’s adventure rises to the promise of the first and cements Greg Rucka’s reputation as one of the best crime writers in the business. The Case of the King of Clubs is next.