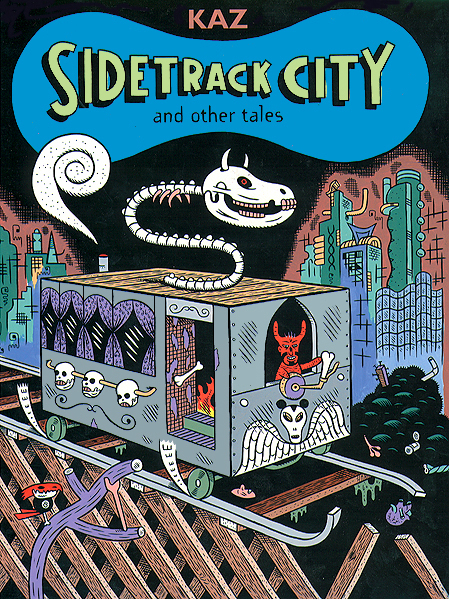 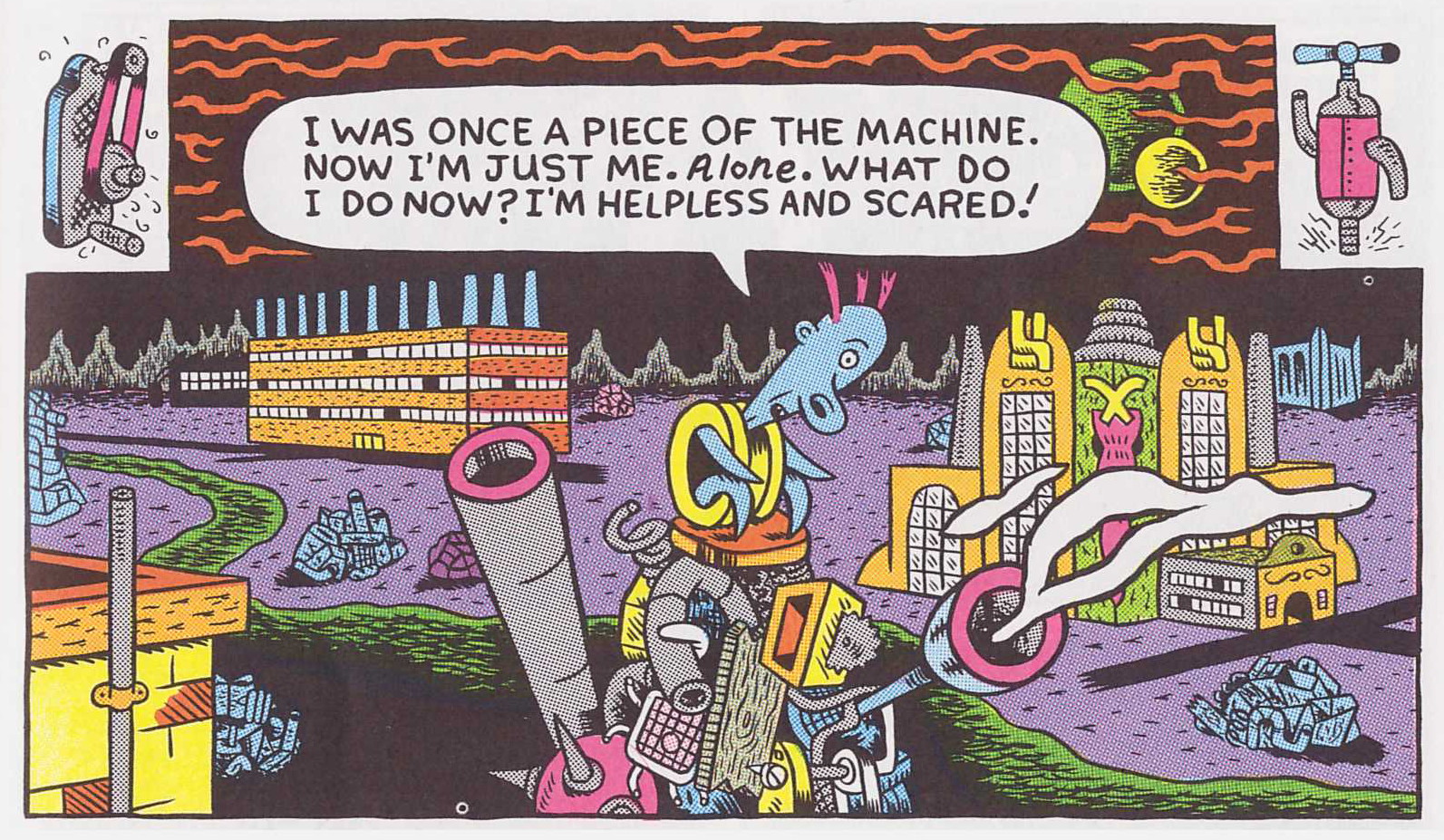 ’Kaz’ (Kazimieras Prapuolenis) first became known for his playful experiments with the comics form in the groundbreaking Raw anthology, and later collected in Buzzbomb. Since 1992 he’s been producing Underworld, a subversion of the classic four-panel gag newspaper strip, syndicated in various alternative weekly papers, and collected in several volumes from Fantagraphics.

Over the early years of Underworld, he was also producing various one-off pieces, collected here in Sidetrack City. Here we see him developing (slightly) longer stories, and enjoying the greater flexibility of larger pages.

Kaz is clearly steeped in classic comics and cartoons. Coming of age in the late 1970s, he’s also clearly inspired by that era’s punk rock attitude, as well as the scatological taboo-breaking of underground ‘comix’ from the 1960s. For example, in the title story, Bizmark has Mickey Mouse ears but on an emaciated human body, and Charlie looks like Porky Pig’s head disembodied.

His visual world is unique and well-realised. ‘Surrealist cartoon’ is an easy term to use, but justified here. This really is the ugly offspring of American cartoons and European Modern Art. We see the strange yet familiar figures of Joan Miro paintings, but with cartoon heads, say, animal-skulls. The landscapes are littered with paraphernalia recalling the cryptic paintings of de Chirico and Magritte: floorboards, pipes, funnels, skirting-boards, pulleys, and miscellaneous obscure machines. His art also has similarities to other artists from Raw: he draws in a wonky bad-but-good style like Gary Panter, then buffs it up with precision inking like Charles Burns.

In a mere 64 pages there are seventeen pieces ranging from a single tier to twenty-odd pages. There’s also a whole menagerie of characters generally grotesque and alienated, like Zak Smoke who resists The Necronaut’s attempts to drag him from the world of the living: “I’m like a zombie. I’m post-dead!”. Bill Beak, is a half-plucked looking bird, whose legs are cartoon chicken drumsticks. He flips between aggressive engagement with the world and wanting to disappear back into his egg… or anything he can find to take its place.

It’s significant that Kaz comes from Hoboken, New Jersey. It’s across the Hudson River from the wealthy heart of New York City, but culturally worlds away. A once thriving port and industrial city, by the time Kaz was growing up Hoboken was in sharp decline with (according to its own Wikipedia entry) “heaps of long uncollected garbage, and packs of roving semi-wild dogs“. Its River Street was nicknamed ‘the Barbary Coast’. This makes sense of his depiction of life in the margins, and the settings of Underworld, ’Goodbye Sun’s post-industrial wasteland future, and of course Sidetrack City itself.

It can seem overwhelmingly bleak, even nihilistic, but gradually we have hints as to what drives the characters. Ms Virus Slunk, from ‘Kaz Women’ who at least makes a living, confesses, “This is my way of dealing with my hurt and anguish”. Skully’s dad has an epiphany with a yip worm and realises he actually cares about his son. Zoot Rumpus, an elderly-juvenile face on a teddy bear’s body and cheekily askew bowler hat wonders: “What will I see when the veils are finally lifted from my cultured and bloodshot eyes?” In their own strange ways these damaged characters are seeking meaning and redemption.

The book ends though with an uncharacteristically straightforward and charming anecdote about Kaz meeting one of his heroes, New York punk singer Richard Hell. It’s a sweet dessert after several courses of wildly spiced, gristly red meat.

Kaz’s Sidetrack City is a dark and dangerous place, both familiar and unsettlingly different, fully and authentically realised. Brave a visit!