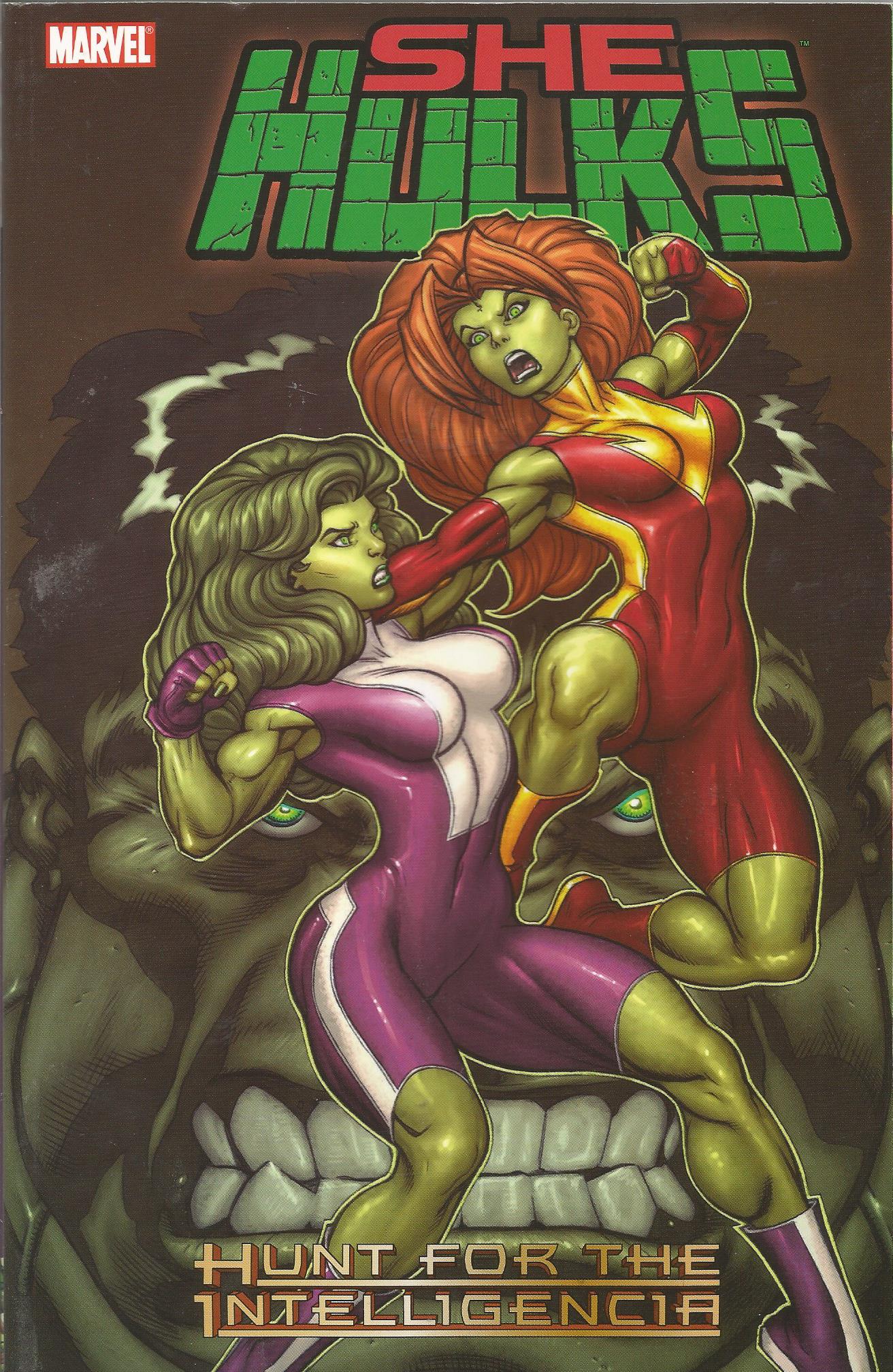 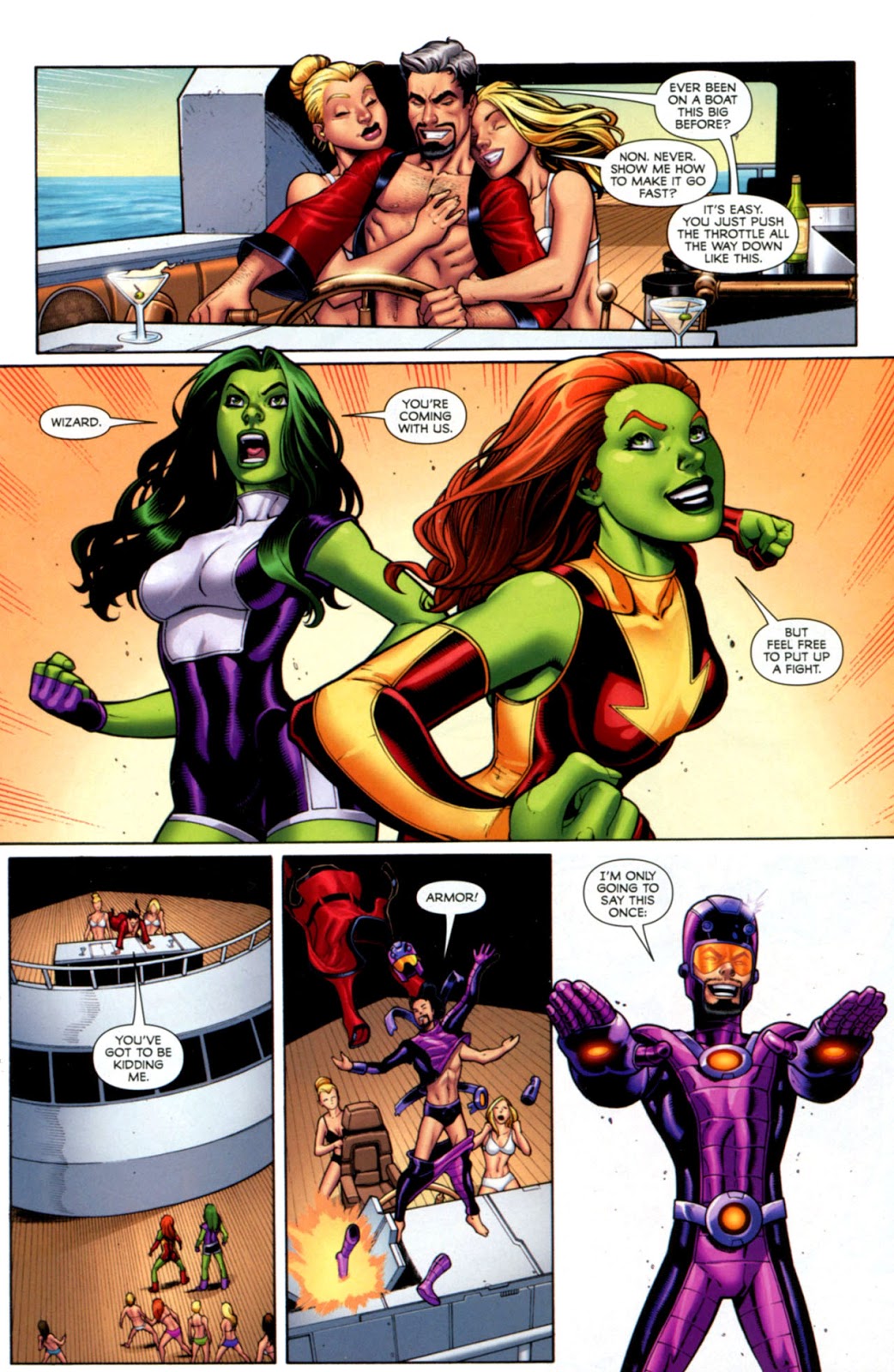 Jennifer Walters, the She-Hulk, has, despite her unfortunate origin as a copyright-saving act of desperation, surmounted that shoddy beginning time and again to give us a surprisingly high proportion of entertaining stories. And this is another.

This spun out of one of Marvel’s interminable ‘event’ crossovers, War of the Hulks, in which all the gamma-radiated types (Green Hulk, Red Hulk, Blue Hulk, Green She-Hulk, Red She-Hulk – was there a Hulk-Hound? Not sure.) were pitted against each other in a conflict orchestrated by a cabal of Marvel’s evil big brains, calling themselves the Intelligencia.

The fact that a) they don’t know how to spell intelligentsia, and b) they thought getting some of the most powerful beings on the planet really angry was a good idea, argues strongly against their purported superior intellect.

In any event, the war is over, the Intelligencia are being hunted down, and chief hunter is Jennifer, using her handy talent trifecta of lawyer, bail bondsman and radioactive powerhouse. She has a sidekick – Lyra, a junior She-Hulk, apparently the daughter of the Hulk and Thundra of the Femizons (you can Wiki it if you’re bothered; it’s not as interesting a backstory as it sounds), sent back from the future, Terminator-style, to avert her world’s own fate. Having apparently succeeded, she’s now stuck  in the present. All clear? Good. Moving on…

Jennifer and Lyra, with occasional help from Cousin Bruce, ensnare the at-large members of the Intelligencia – Trapster, Wizard, Red Ghost, Mad Thinker, Klaw – in fairly short order, both the deductive/interrogation and action scenes being adeptly handled. Harrison Wilcox’s dialogue has a fresh and witty quality that suits She-Hulk; her buoyant, glass-half-full personality comes through, and Wilcox’s inventiveness and narrative vitality makes yet another scene of the hero punching out the villain an unexpectedly  entertaining read. The battle with the Red Ghost’s disturbingly adorable super-apes is particularly fun.

Where Wilcox really entertains, though, is with Jennifer’s role as a surrogate parent to Lyra, and in particular the scenes where Lyra has to face one of the true horrors of modern life – High School! Yes, yes, it’s all very Buffy-reminiscent, but nevertheless well done, with the inevitable meetings with bitchy cliquettes, obnoxious jocks, and potential romantic interest all keeping the reader’s attention.

Ryan Stegman’s art is lovely; evoking Ed McGuinness, but without the forced cartooniness that occasionally jolts the reader  out of the story. It’s possessed of an admirably clear narrative flow. One is never for a moment in any doubt as to the sequence of events, and while that shouldn’t be an exception in comics, sadly, today, it too often is.

You don’t have to have read the previous umpty-squillion issues of Hulk, or the crossover, in order to get it. The book gives you everything you need to know as you go along, and while it reads very much like a pilot for a new series, High-School She-Hulk, that would, if this story is any indication of quality, be a cracking series.

The slender volume is filled out by a reprint from She-Hulk’s 30th Anniversary special,  which is a little too fan-servicey to be enjoyable, and a selection of ‘Who’s Who’ style pages on Jen and Lyra,