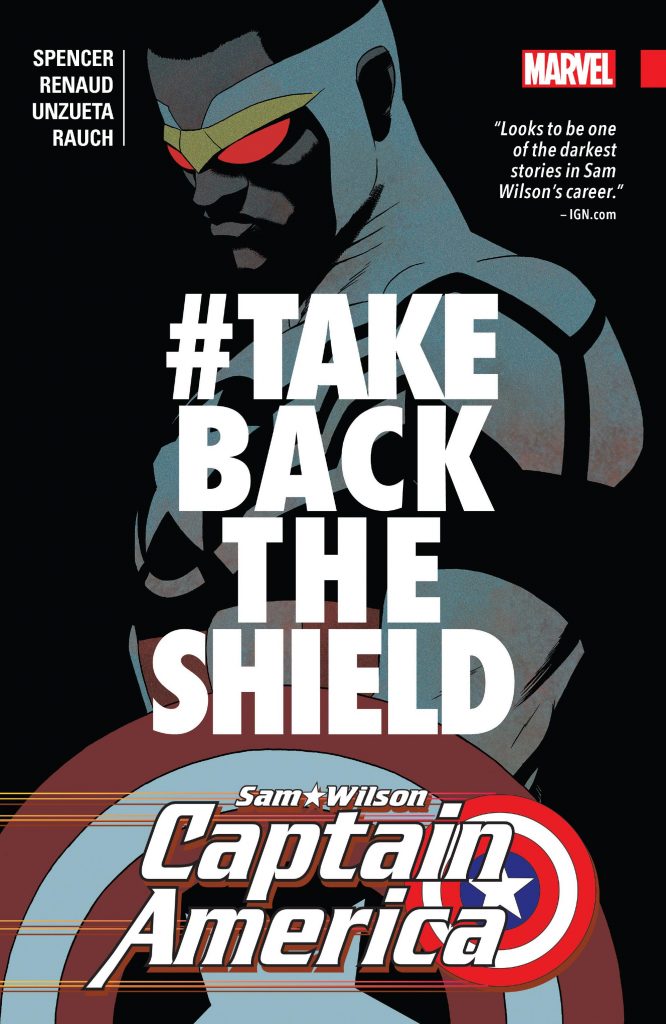 The hashtag title is that of a social media campaign organised by right wing interests who’ve targeted Sam Wilson. With Steve Rogers now back to his physical prime and also using the Captain America identity these people believe it’s insulting that Sam continues to use the name. Sam’s a confident guy, but the constant assault is getting to him, and that’s before Nick Spencer greatly cranks up the tension in the opening chapter. It’s not handled with quite the finesse of some earlier work, though, featuring another villain with a political agenda expounding at considerable length about his views. These address political points about the USA that have been feeding into the series, although in a very broad context, but it crosses a line by virtue of being such an obvious lecture. The surrounding superhero action works its way to a surprise that leaves Sam even worse off than previously, followed by a further shock tying into the ending of Civil War II.

That Spencer has gradually been expanding Sam Wilson: Captain America into an ensemble title is underlined by the final three chapters of the 21st century material, spotlighting D-Man, Misty Knight and the Falcon respectively, and Rage returning, so not just being a convenient personality on which to hang a plot point last time round. They’re all okay action stories, with the wrestling piece more upbeat than anything in a dark series to date, but are a holding pattern. Not that Sam doesn’t deserve a break.

So does primary artist Daniel Acuña, not involved with any of this content. Paul Renaud (sample page) draws more than Angel Unzueta, but they’re both fine at the action and the conversations. Strangely out of place, however, is Szymon Kudranski, usually excellent, but here turning in some very stiffly posed pages for the Misty Knight solo.

Because at four episodes this wouldn’t be great value for money, #TakeBackTheShield ends with a flashback to the 1990s Captain America by Mark Gruenwald and Kieron Dwyer. Since some of the topics covered and the characters used are also employed by Spencer the reason for including this story can be justified, but Sam Wilson isn’t anywhere to be seen. If the story were any good his absence might not be as obvious, but even trying to be kind by accepting it as the product of its times, finding anything positive to say is difficult. A lot of people working at Marvel then must have thought Captain America fighting President Ronald Reagan transformed into a lizard was a good idea, but if meant to be funny the joke doesn’t transmit, and if meant as thrilling it fails by an even greater distance. There’s so much of it, almost a third of the page count, that it drags the rating of the whole book down to average overall.

Sam Wilson’s solo run as Captain America concludes with End of the Line.