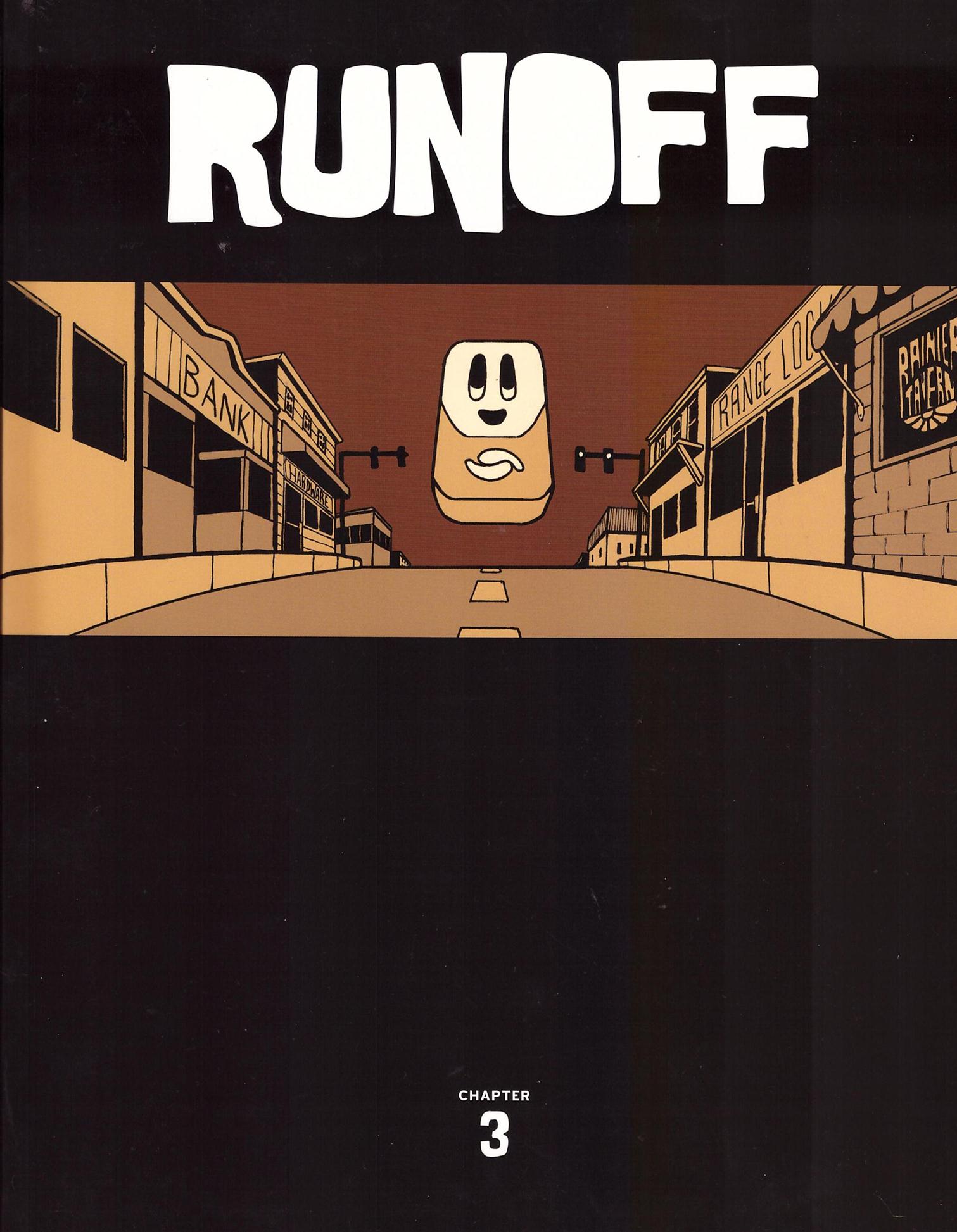 As Chapter 2 concluded, the small town of Range had seen a feral primal being let loose, talking animals, ghosts, several murders, what seems like an intrusion from a higher dimension and a group of folk straight from a horror movie with a zombie chauffeur. Yup, times are strange right enough.

The five episode Chapter 3 finishes Runoff with all the strengths that blessed the previous volumes alongside the weaknesses that plagued them. Foremost among those is Tom Manning’s choice to draw the story without defined panel borders and bleed every page off the edge. It constantly cramps his cast and is especially ineffective when it comes to action. It’s frustrating to see an otherwise thoughtful, and engaging horror piece so sabotaged.

When interviewed, Manning has credited the rural eccentrics of Berke Breathed’s Bloom County strip as his greatest influence, and moreso than in the previous books he slips into the homage of telling parts of Runoff in the form of four panel gag strips. In addition to enforcing panel borders these serve as well worked gags either as character insights or moving the story forward, which takes some doing in places as Manning still has a fair wedge of complicated explanations to deliver, running to several pages at a time. They connect with the horror trappings. Alongside those Runoff has been a look at an ordinary community under tremendous pressure, Manning introducing a bunch of people each representing aspects of any small American town, and upcoming mayoral elections focus the personalities. Combined with the gag strips it makes this a far funnier book, but the way Manning switches the mood away rapidly has the intended shocking effect. It’s an effective trick pulled more than once, and as explanations tumble out, some of what seemed capricious diversions in the earlier volumes are given an impressive grounding. You may be wondering about the title. That’s included in the explanations.

Everything is very clever, and while those information dumps could be more subtle Manning brings Runoff to a close logically, with a far greater scope than was previously apparent, blending science and mysticism for what’s effectively tragedy. The ending might not be to all tastes, and it’s certainly not a crowd pleaser, which is Manning’s prerogative, but there’s also the thought that someone so creative with the content as whole might have come up with an ending that subverted his set-up. It is a narrative tradition, after all. Runoff was later collected as a single volume.