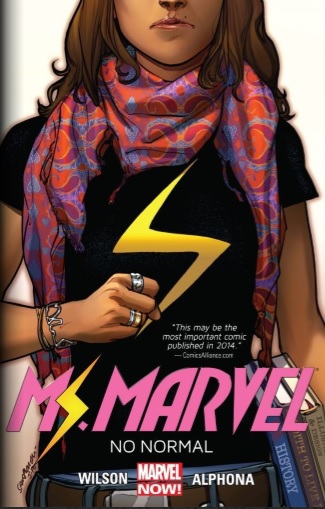 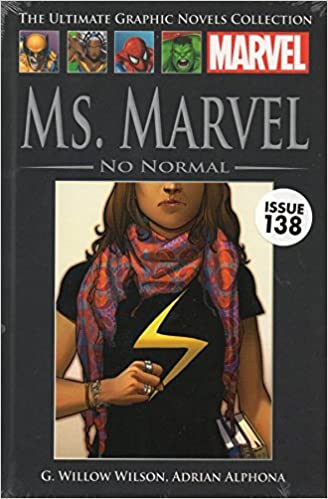 There was a considerable amount of press attention devoted to this new Ms Marvel when she first appeared in 2014. With Carol Danvers taking on the role of Captain Marvel, Ms. Marvel’s identity was was adopted by a first-generation teenage Pakistani-American girl living in Jersey City. Kamala Khan acquires superpowers when she walks into a release of Terrigen mist (part of the Inhumanity event). This was written by  G. Willow Wilson, but a lot of credit for the character’s creation is down to editor Sana Amanat, herself a first generation Pakistani-American.

This could so easily have been terrible, a cynical copyright-asserting ploy, or a tokenistic sop towards diversity. Instead, it is an absolute delight, some of the best material Marvel has published in a long time. At the core of this success is that Wilson and Amanat ensure this series is about people, not symbols. Kamala is a teenager coming to terms with becoming an adult, and trying to reconcile her identities as a Muslim, as a Pakistani and as an American. There are valid comparisons to the early Spider-Man stories, when Peter Parker was trying to negotiate being a schoolkid and being a superhero. It is also at times laugh out loud funny. Kamala is witty, and obsessed with the Avengers, about whom she writes fanfic – another delight of this comic is that Wilson gets what fanfic is about in a way that many writers don’t.

Other characters are equally carefully delineated. Many could easily slip into cliché – the idiot jock, the clueless WASP girl who is desperate to appear politically correct, the overly pious Muslim son – but Wilson ensures all have greater depth than their surface appearance. The son, for instance, turns out to be more sympathetic to his sister Kamala than it first appears. And these characters all populate an environment that has a reality often lacking in superhero tales. This recalls the best of Buffy the Vampire Slayer, when that was about surviving school, or of the sort of sitcom that actually feels like it’s written about real people.

Adrian Alphona’s artwork is lovely without resembling typical superhero artwork. Faces are sometimes very cartoony, especially in long shot. Generally, superheroic ‘realism’ is eschewed and the result is actually something that feels more real. The body shapes may be stylised, but they aren’t all the same, and the feel more ordinary. There are echoes of the brilliant art Stephen DeStefano produced for ‘Mazing Man. The effect is enhanced by the rich and subtle colouring of Ian Herring.

Overall, this is superb, a fully deserved winner of the 2014 Hugo Award for Best Graphic Story, demonstrating the series’ cross-over potential to sf fans. It’s a comic that makes the reader feel better about themselves after reading it. Go and read this, not because it is Important, but because it is a first-class experience. In fact, buy it in hardback as part of the Ultimate Graphic Novel Collection. It continues in Generation Why.