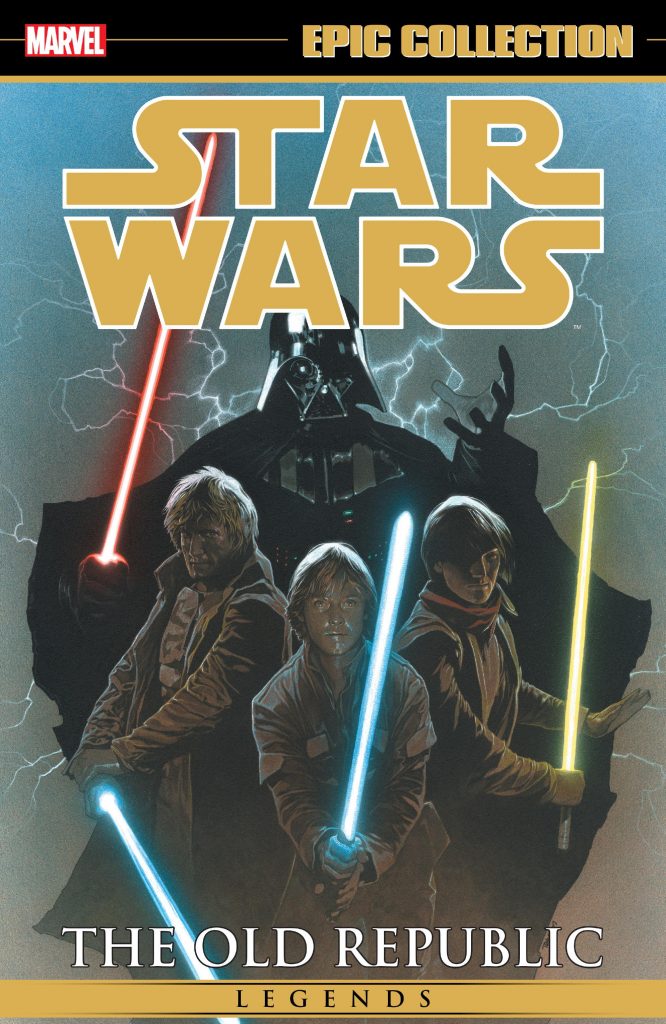 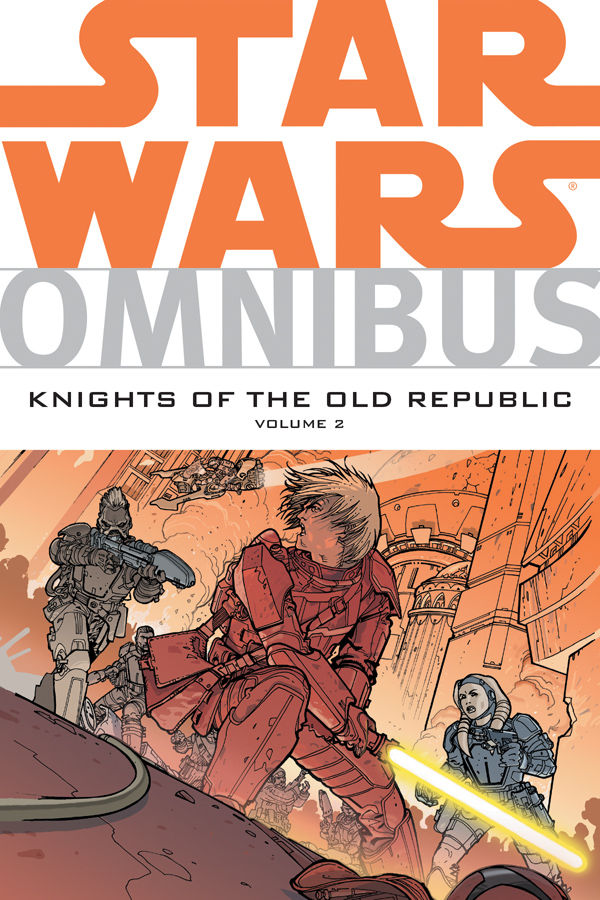 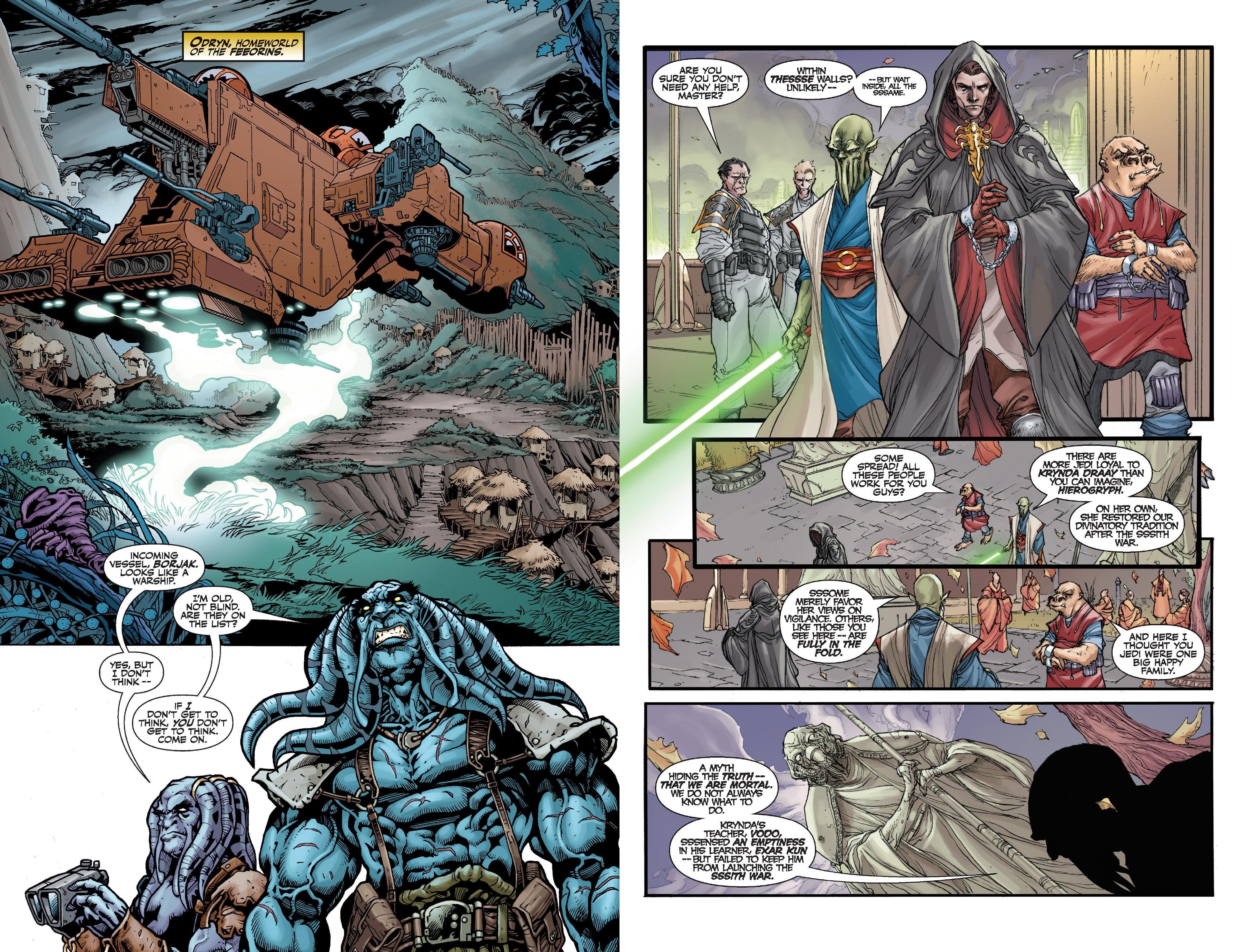 Someone at Marvel hasn’t been paying attention to the content, or just figured a prominent Darth Vader on the cover would lead to better sales than using characters not known to Star Wars moviegoers. Beware. There’s no Darth Vader inside. He does appear in the Vector story, but not in the Old Republic portion included.

As with volume one, this collects what were previously available as three paperbacks, Daze of Hate, Knights of Suffering, Vector and Vindication, plus a couple of extra chapters. Between them they escalate, then complete the story running since the start of the series, resolving the fate of one time Jedi trainee Zayne Carrick, his allies and his foes. In story terms at least, no-one should be disappointed.

Artistically, it’s a different matter, which is shame as the high standard of art was a series touchstone. Brian Ching (sample art right) and Dustin Weaver contribute, both of them excellent, but the standard drops otherwise. To be fair to Bong Dazo, he turns things around. His first story here is ugly, with grimacing faces in viewpoints pulled too close, but his second story is a revelation (sample art left). He’s not as strong as Ching and Weaver when it comes to design and page layouts, but his action scenes are well paced, and he offers greater spectacle. Alan Robinson is also fine, just diminished by the company he’s keeping, but the cartooning of Scott Hepburn is unsuited to a series that’s been sustained on forms of realism. He’d be decent enough elsewhere, but he transforms some regular characters into grotesques. Zayne with the Joker’s pointed chin? No thank you.

The Old Empire stories began with Zayne accused of murdering his fellow Jedi trainees. The real culprits were a group of Jedi Knights calling themselves the Covenant, and acting in what they believed to be the greater good after prophetic visions of the dangers one of the trainees would pose. Much of the series is been about what’s done in the name of the greater good, and after a few other stories John Jackson Miller heads toward the demarcation line between good and evil in finishing that plot very conclusively, and very satisfyingly. Before then we’ve been introduced to a despot commanding a fearsome weapon, seen conditions on Taris now occupied by the Mandalorians, and viewed an ancient Sith weapon again exposed to the world. It’s all been entertaining, with Miller very adept at juggling a large cast and ensuring they all have a purpose within the bigger scheme. It ranks lower than the previous volume due to reservations about some of the art, but shouldn’t disappoint otherwise.

If after reading them any further proof is required of the strong cast and locations Miller has introduced, the collection ends with the eighteen handbook pages running through them all, along with some great illustrations of the technology.

This collection was previously issued by Dark Horse as Star Wars Omnibus: Knights of the Old Republic Volume Two. and Zayne’s story concludes in volume three of The Old Republic.