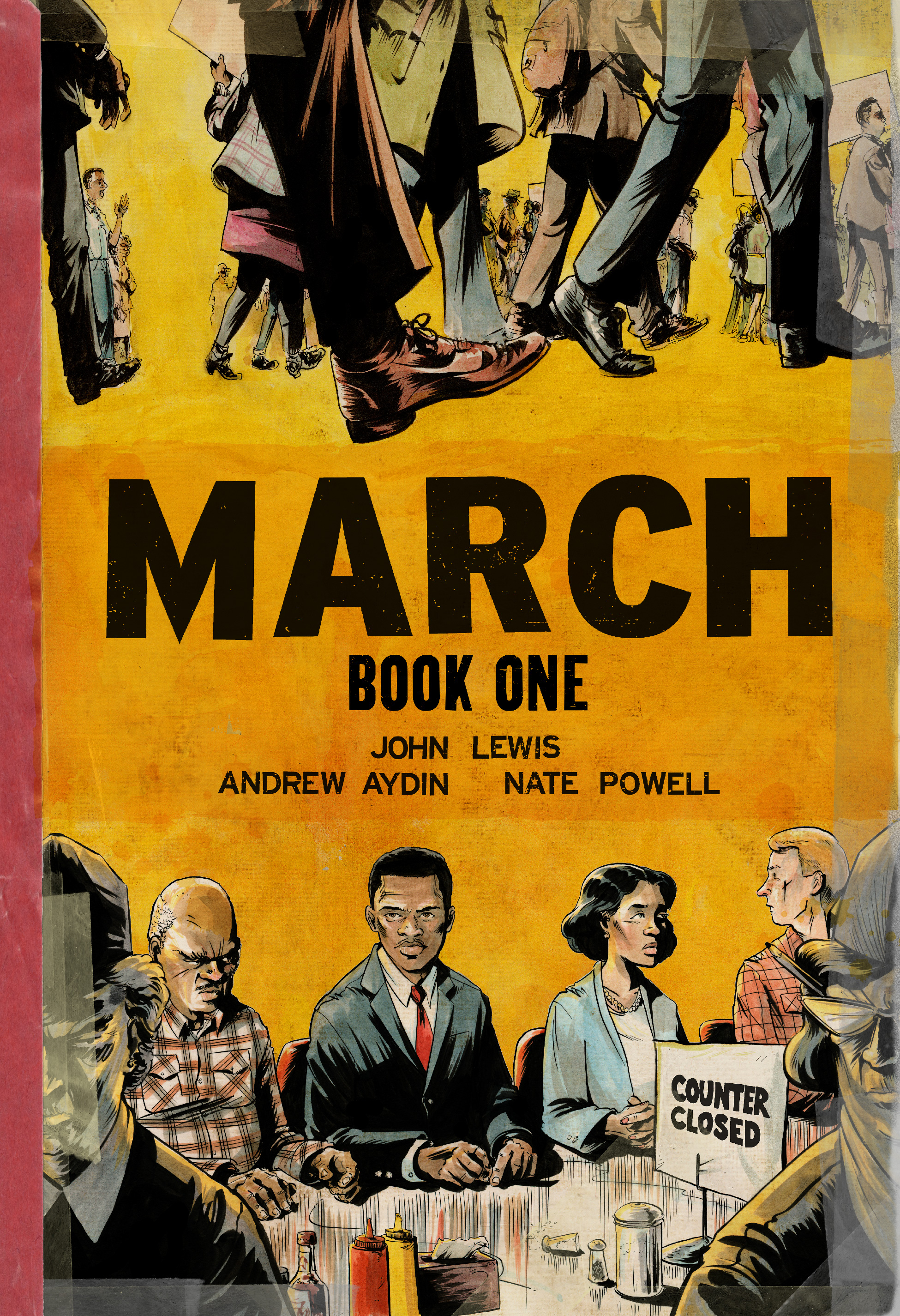 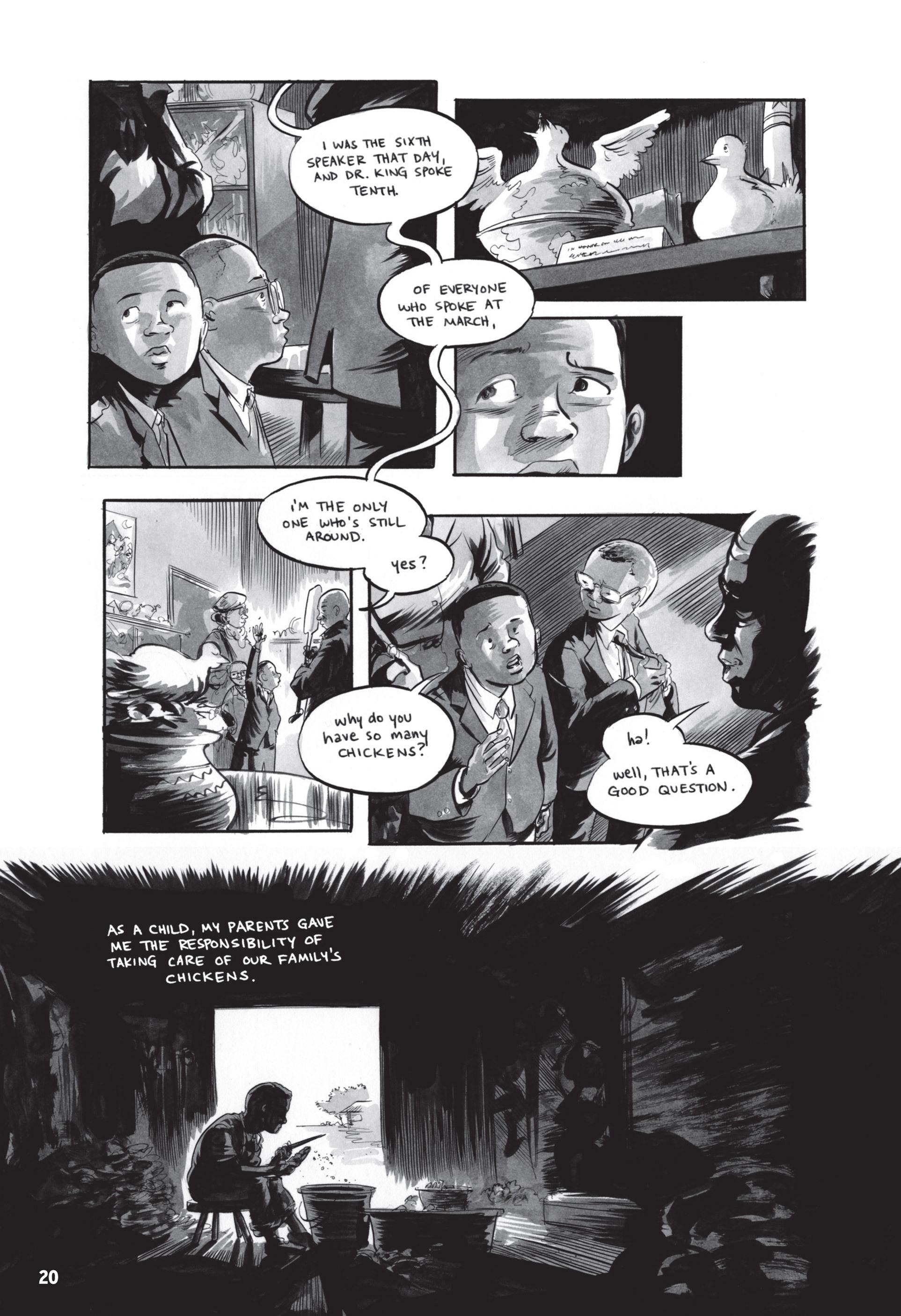 The initial promotion for March focussed heavily on the writer being US Congressman John Lewis, a lofty convert to the concept of graphic novels, yet Lewis has always been a man of vision ahead of his time. Georgia’s representative is a lifelong civil rights campaigner, an activist since his student days, and was crucially involved in organising 1963’s March on Washington. Attracting over a million people, this was the largest ever protest organised in the USA, and the occasion at which Martin Luther King delivered his most famous speech.

The title, though, is rather a misnomer. March, extending over three volumes, doesn’t just focus on 1963, but is a more complete autobiographical memoir of Lewis’ early years, co-authored by his policy advisor Andrew Aydin. Fourteen pages, for instance, are occupied by Lewis’ recollections of life as a four year old raising chickens on his parents’ farm in rural Alabama. It’s more interesting than may be assumed, as responsibility at an early age imbued a sense of pride and love during a time when he took his first steps into biblical study. It led the young Lewis to baptise the newborns.

A road trip with his Uncle Otis in 1951 at the age of eleven opened the eyes of the young Lewis both to the iniquities of life, and to the possibilities of it beyond his parochial experiences. For a Southern boy to whom segregation was a way of life, that his Uncle had white neighbours in Buffalo was astounding.

The determination that would characterise Lewis’ life manifested early in a compulsion to attend school irrespective of the family’s farming needs. He’s inspired both by the injustices of the times, and by those who stand up to them, but mostly by Martin Luther King, heard over static-heavy radio waves and experienced via newspaper articles.

If at times Lewis’ account comes across as a little too hagiographical, the question to be asked is how many of us have achieved what he has in our lifetimes? Or indeed, how many of us can match what he achieved before the age of twenty? He first preached to his congregation aged sixteen, and was fundamental in founding a group steeped in the philosophy of non-violent resistance. One of the book’s most intense sequences is the members taunting and prodding each other with the insults they endure on a daily basis. The one step of removal accentuates rather than diminishes the ignominy.

An Eisnereque looseness infuses Nate Powell’s art, which brilliantly evokes the times in stark black and white. It never interferes with the storytelling, but Powell sometimes sneaks in a visual metaphor, such as Lewis having the bible engraved upon him at an early age. He’s also very good with suggestion, the expanse of his panels during Lewis’ trip at eleven reflecting the vastness of the areas traversed, while the bigotry encountered is heads framed in profile, indicating closed minds.

March is inspiring and educational, a valuable insight into life as it was for generations not too far distant, for whom the Sears Roebuck catalogue not Amazon was the wish book. Background information can be found on publisher Top Shelf’s site, and it’s heartening to know just how wholeheartedly the memoir has been received during a time when racial prejudice is again being highlighted via police shootings across the USA. 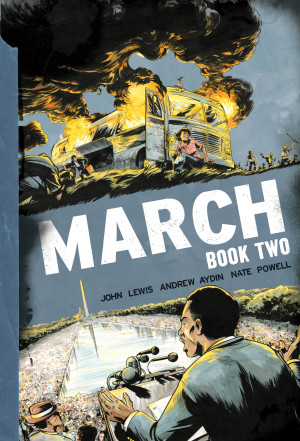 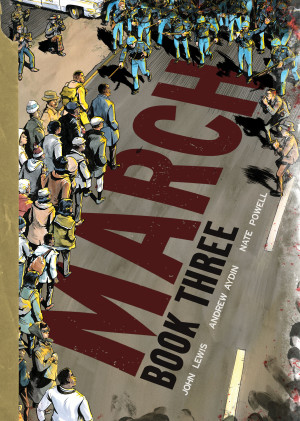