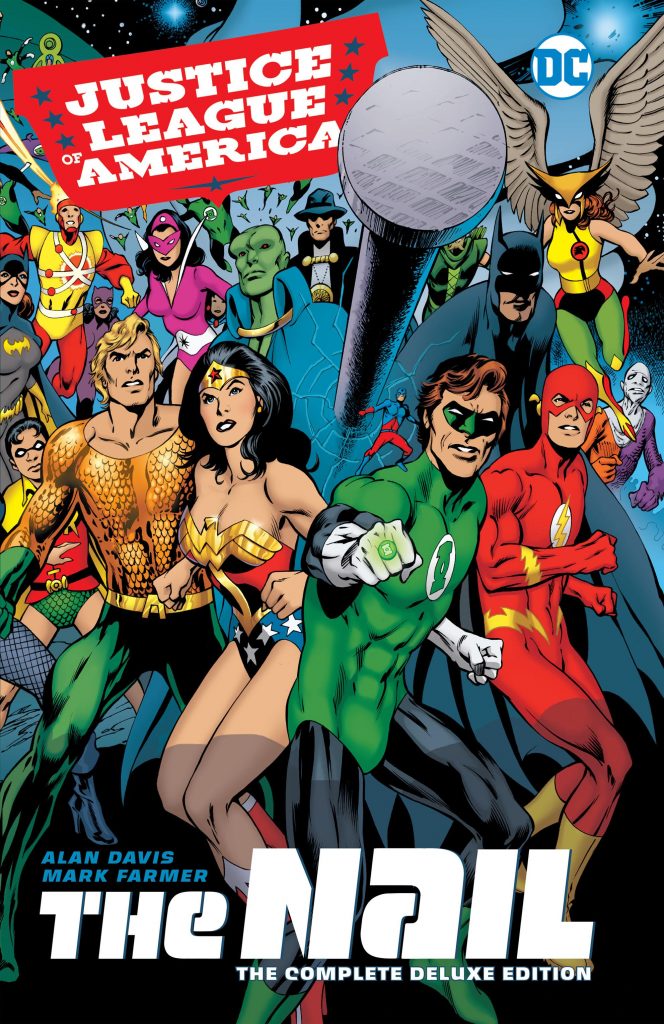 ‘Elseworlds’ tales altered a crucial element of a hero’s mythos, sending their saga in another direction, and DC became far too enamoured with them around the turn of the century. The Nail’s first run, though, has considerably greater merit than the majority of its banged-out companions.

Inspired by the old nursery rhyme,“For Want of A Nail, a Shoe was Lost…“, the ‘Nail’ of the title is literal, giving Johnathan and Martha Kent’s truck a flat tire. On a certain night they don’t drive into Smallville, and consequently don’t find the infant Kal-El’s rocketship, adopt the alien foundling, and raise him to be Superman.

Decades later, the Justice League faces a crisis of public confidence. Lex Luthor’s Metropolis, in which superhuman guardians are banned, is apparently a paradise. An orchestrated hate campaign portrays all metahumans as the first wave of an alien incursion, designed to soften Earth’s defences by gaining humanity’s confidence. Some JLA members are aliens, but most are all too human, yet denials fall on deaf ears. Lois Lane unearths a sinister conspiracy as other metahumans – the Doom Patrol, the Metal Men, the Outsiders – are captured, driven into hiding, or subverted to pawns of the new regime.

Alan Davis writes as well as draws and in a lengthy afterword, explains his primary goal was reader accessibility, whether or not they were familiar with the concepts. There are no narrative captions, no introspective thought balloons, just dialogue and actions: yet seemingly disparate events are skillfully knitted together, and the clarity of the narrative is never lost despite the multiplicity of characters.

Davis’ art is also at its peak, featuring breathtaking full-pages of each JLA member in individual action, and body-strewn battle scenes in abundance, but the nonverbal communication is beautifully handled. Hawkwoman’s quiet, dignified outrage at the disregard of her husband’s sacrifice, or Aquaman’s barely-concealed contempt, are conveyed with an artistry requiring no verbal exposition.

The only flaw assumes the presence of Superman in this scenario would have prevented Luthor’s rise to power. As this Luthor is, if anything, more plausible and charismatic than the standard issue, this is by no means certain. Nevertheless, a fine example of  superheroics done right, with Davis’ love and knowledge of the characters manifest on every page.

Its sucess resulted in a sequel, Another Nail. Set in the same continuity, this opens with the Justice Leaguers feeling sidelined, as Superman seems to be handling things virtually alone. Soon, however, the cosmic war between the New Gods  threatens to destabilise the universe.

It’s too much. Breaches between the dimensions, time gone awry, supernatural interventions, and heroes, heroes, heroes, pouring from every page. It’s as if Davis is compensating for the clarity of The Nail by chucking in everything he’s ever liked at DC, including cameos from the Crime Syndicate, the Inferior Five, and two generations of the Legion of Super-Heroes! In the sequel’s handful of quiet moments, Lois Lane demonstrates why she is actually worthy of a Man of Steel, and the Kents are portrayed superbly. But there’s never more than a moment, before it’s back to the chaotic battles.

Davis’ art is again excellent, and while the story is confusing and overdone, there’s enough to keep the average reader entertained, at least until they look back and think; “Hang on…”. It’s bit of a letdown after the shining triumph of The Nail.

For a deluxe hardcover, extras are few, but Davis supplies a new preface detailing his frustration at the treacle slow approval of his synopsis.