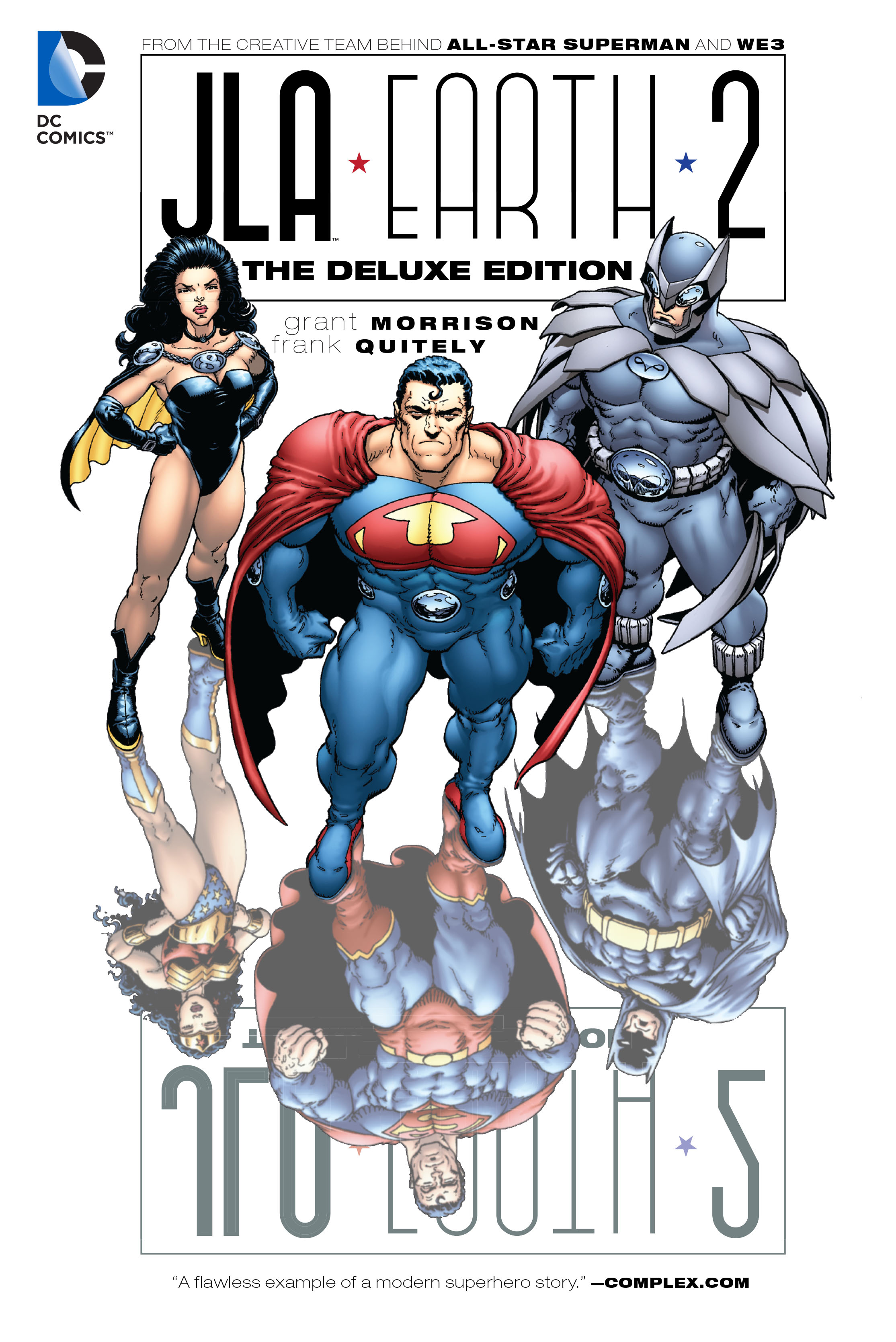 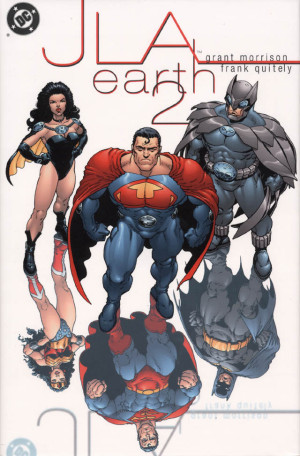 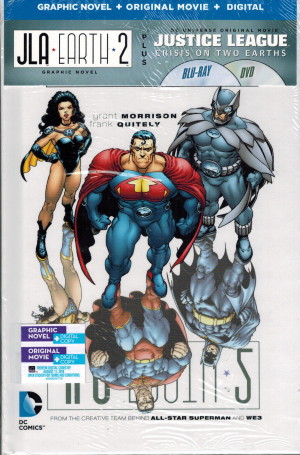 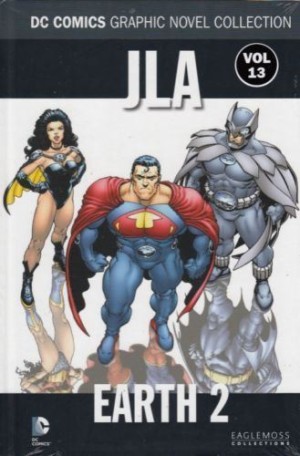 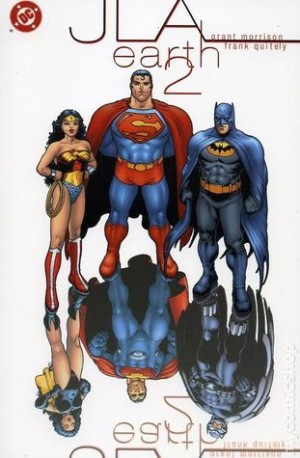 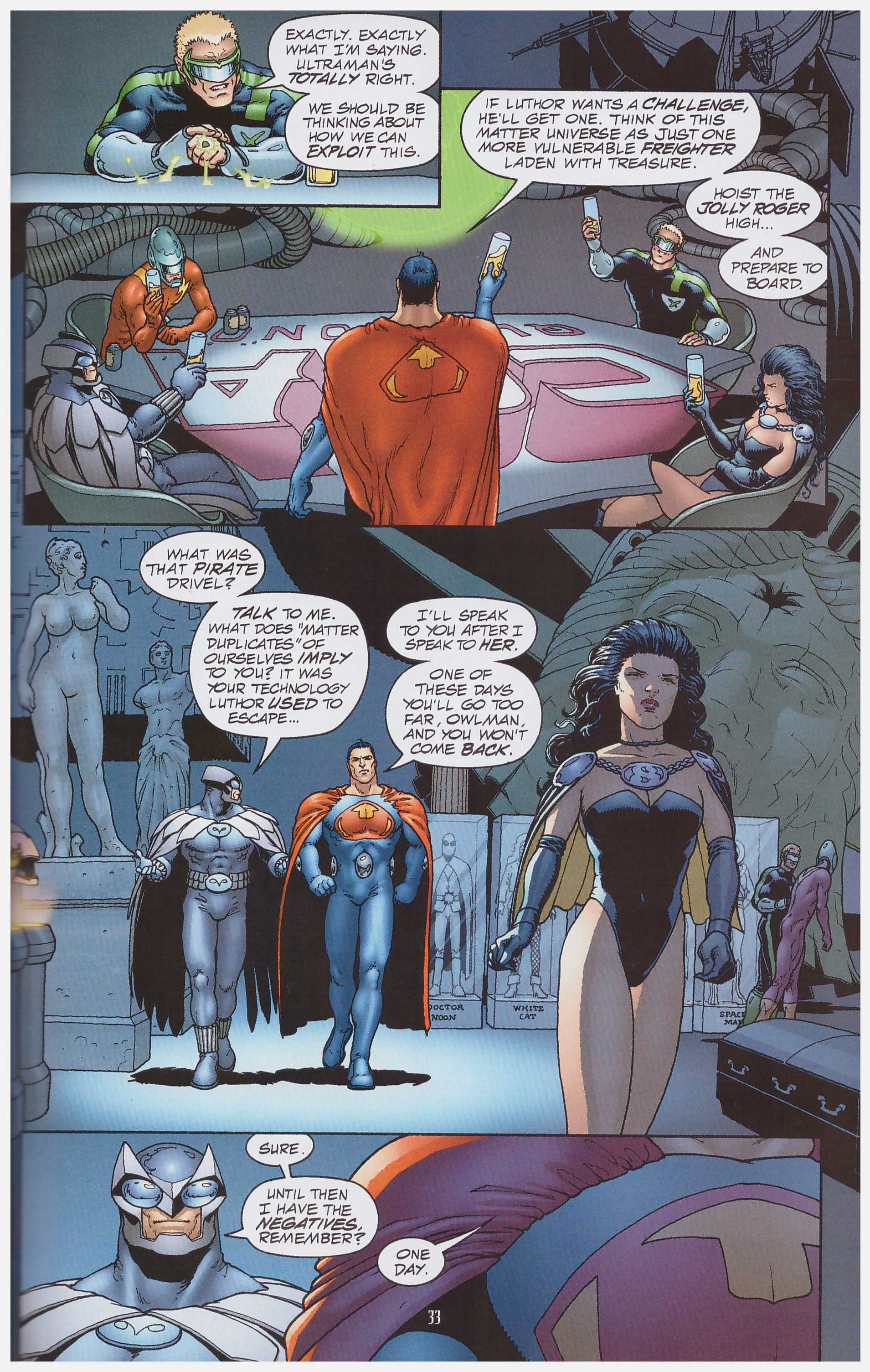 His work had appeared illustrating a number of other titles, but it was with Grant Morrison and Earth 2 that Frank Quitely leapt into wider appreciation. This is 96 full pages of his sumptuous delicate line, and these days it’s astounding to consider that it was produced in under a year.

This is the period of the Justice League headquartered on the moon, Kyle Rayner as Green Lantern and Aquaman missing a hand, but gaining a spear. It’s not DC’s greatest era, but Morrison’s spirited JLA title was a highlight, and his reconfiguration of a couple of old Gardner Fox plot springboards (the most obvious found in Justice League of America Archives volume four) continued a high concept streak. The Justice League encounter the super beings of an other-dimensional Earth. These counterparts, though, are resolutely evil.

Morrison enjoys twisting the familiar for his new Earth, in which KKK is the premier airline, dollar bills feature Benedict Arnold’s portrait, Lois Lane is Super-Woman and Lex Luthor is the sole superhero. Even his scientific genius is hopelessly mismatched when taking on not just Ultraman, but four further Justice League analogues. Luthor escapes to the Justice League’s Earth and they return with him to an Earth much like ours, but devoid of hope, where death is cheap and continued life often at the whim of the Crime Syndicate. “We’ve learned that yours is a world crushed by tyranny, paralyzed by crime and crippled by corruption”, announces Wonder Woman, “we’ve heard the call and the Crime Syndicate is no more.” Yes, it’s that simple. At first.

In terms of the way he’d develop, this isn’t prime Quitely art, but by any other standards it’s excellent. He’s still learning how to configure superheroes for maximum effect, but there’s a visual subtlety throughout, although some may come from Morrison’s direction. If any confirmation were needed of the regular Luthor’s conceit and arrogance, for instance, it’s provided by his office desk being constructed from the trunk of a Californian Redwood tree, and Ultraman hugging a representation of Justice has a truly chilling quality.

Morrison’s in playful mood throughout from the patronising and faux imperialistic BBC news commentary to the echo indicated by the use of a latin phrase. However, lest that impression be given, Earth 2 isn’t just a collection of well illustrated capricious vignettes. There’s a cohesive and suspenseful plot posing the question of when tyranny might be acceptable, escalating throughout, and surprising with several horrific developments. The contrast between the two Earths and the philosophical debate it prompts was very comfortable territory for Morrison even back in the 1990s, resulting in a laconic shorthand to the speech balloons. His resolution is neatly in tune with the arguments related beforehand, and encompasses the stunning notion of the Justice League losing.

For all the use of what passing time has judged as lesser iterations of familiar heroes, Earth 2 is no millennial relic. On publication it was arguable that Morrison hadn’t written a better mainstream superhero story, and it still ranks very high in his canon.

The more recent deluxe edition includes a wealth of background notes, references and sketches, and Earth 2 is also available as a combination pack providing the original story and the animated version it spawned. In the UK it’s part of Eaglemoss’ DC Comics Graphic Novel Collection. 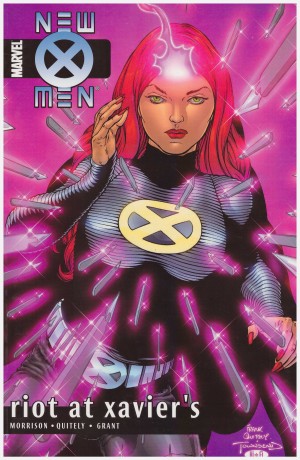