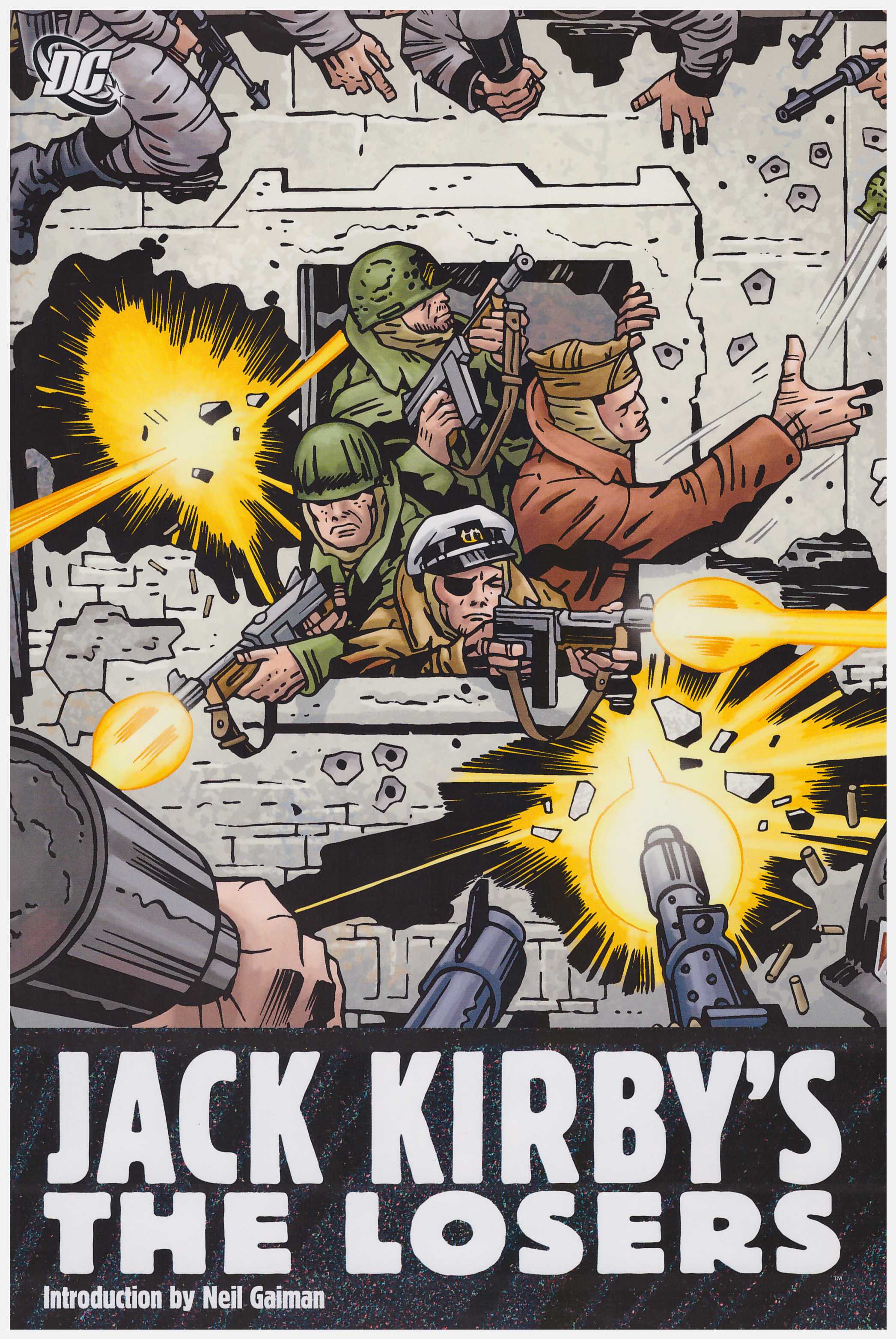 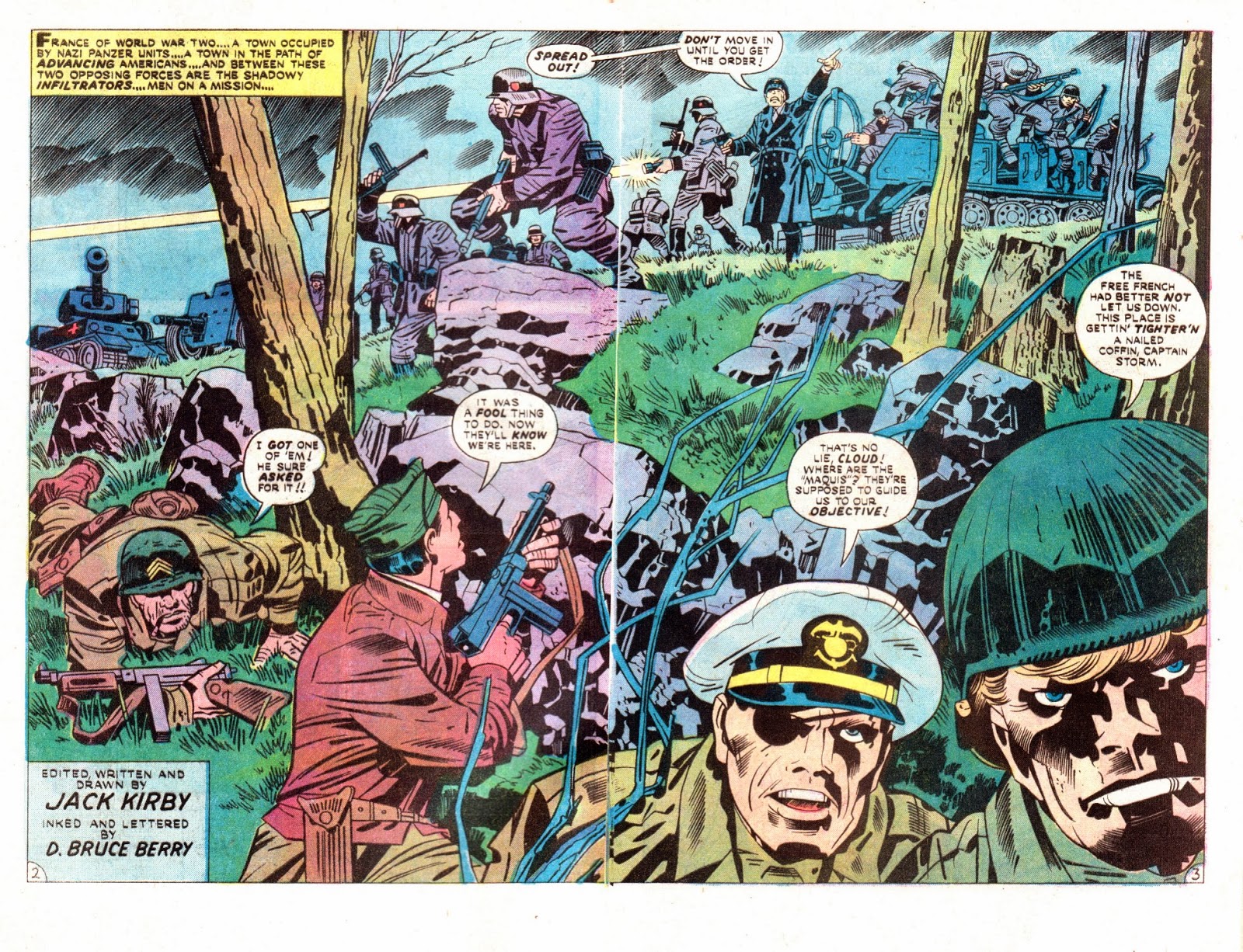 It’s related that when in Jack Kirby’s company little time would elapse before he began telling stories of his experiences during World War II. Drafted into an infantry unit, an assignation delivering a high mortality rate alone, Kirby was further endangered when his artistic skills became known. After the US invasion of Europe he was deployed on scouting missions to sketch the layout of occupied territory prior to attack. Such were the appalling conditions that Kirby’s war ended in the Winter of 1944 when serious consideration was given to amputating his legs as he suffered from fever induced by trench foot. Some of Kirby’s wartime recollections are preserved in an interview on the TwoMorrows website. Others fed into his work on The Losers.

Prior to Kirby the Losers were a mismatched collection of DC war characters unable to sustain their own features. Johnny Cloud was a Navajo air ace, Captain Storm commanded patrol boats, and Gunner and Sarge were everyman grunts. It was five years after their odd blending into a single team that Kirby was handed control of their destinies.

He cared little for any previous characterisation, nor for the title, considering it disrespectful to servicemen. In an editorial page not reprinted here he introduced his version as “a small squad of “everymen” caught up in the crushing tide of events, pushing their “know-how” to the limit in a wild effort to survive”. As with other characters he worked on, he viewed the Losers as a vehicle for his stories rather than a method of indulging in soul-searching, although brief poetic moments emerge. Kirby ensured they remained visually consistent, which results in some unintentionally comic moments. There’s no hint of irony, for instance, in the Native American Cloud disguising himself as an SS officer at one point.

These stories contain all the high-resolution action one might expect from Kirby in the 1970s as the Losers manifest in whichever country he sets his story at any given time, and a broad variety of topics. There’s the hunt for a spy on home soil, a race re-run in desperate circumstances, the treachery awaiting some Russian refugees, an investigation of the Japanese code of honour, a glimpse at Yugoslavian partisans and many more.

Such is the dynamic bombast of Kirby’s art that there may be an expectation this counters the humanity, which isn’t the case. There’s some immensely powerful material here. A tale of the wounded Sarge surviving almost certain death from an approaching tank and his subsequent near breakdown is greatly resonant, as is a tale about how children have to fight. Kirby populates his content with larger than life characters who work in context. There’s trader Panama Fattie, eventually revealed to have a heart, athlete Mile A Minute Jones, SF fan Rodney Rumpkin, and a haunted officer in India.

Kirby’s approach irritated the readers of 1974 if the letters pages in the original comics provide balance, but time has taken a kinder view of this blend of personal experience with a natural dramatic flair. Some would have it that this exorcism is among Kirby’s finest 1970s work, which is not a case lacking foundation.