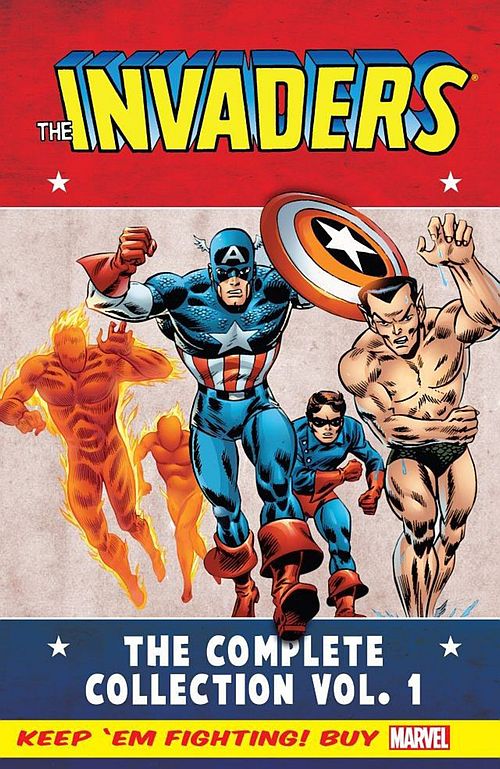 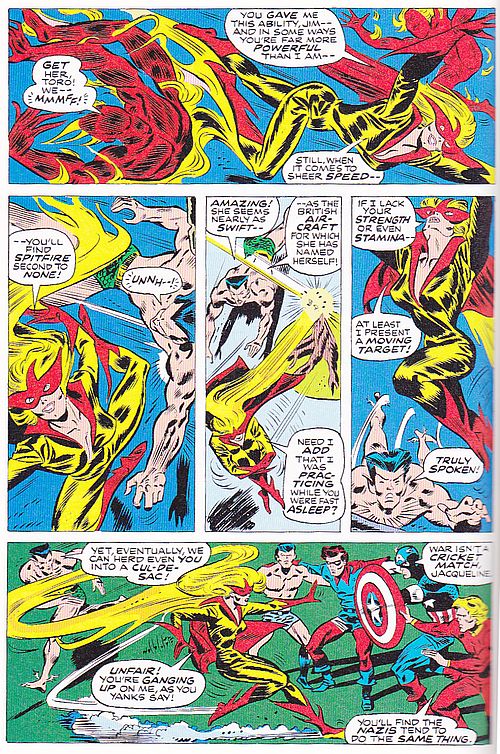 Though Marvel Comics as a company has existed only since the early 1960s, some of its characters have been around since the end of the 1930s. Namor the Sub-Mariner, Captain America and the original Human Torch (an artificial human) all had their own series back in the 1940s, alongside their sidekicks Bucky, a non-powered teenager, for Captain America and Toro, another teenager, with the same powers as the Torch. They even met in post-WWII comics. The five characters are united as the Invaders, whose 1975-1979 tales are collected in two volumes, beginning here.

The series follows the adventures of the quintet from the end of 1941, as they face various super-powered Nazis and Axis followers, such as Master Man (an equivalent of Captain America), U-Man (an Atlantean allied to the Nazis) or the Red Skull. Writer Roy Thomas builds a good cast of heroes and villains to fight World War II, some invented for this purpose, some dug up from more or less obscure 1940s comics. Thomas has a real knowledge of comics history and an open access to archives of his publisher and its predecessors; one of the strong points of this series is the sense of real history woven with superhero action.

Winston Churchill is a regular guest, creating a strong link between the USA and the beleaguered UK, and some of Thomas’s lasting creations are from England. He introduces heroes Union Jack (another Captain America equivalent) and Spitfire (a female speedster), as well as the vampiric Baron Blood, who’d return time and again to plague Captain America.

Thomas pays homage to the artists behind his childhood favorites in two ways. Firstly by having Toro and Bucky read the comics of the time and by having three of the artists draw chapters of a story. Alex Schomburg is known as a cover artist of the 1940s, Don Rico had worked anonymously on Captain America, and Lee Elias had been the artist of the post-War Namor series. That’s a treat for readers interested in older art styles.

Another strong point is the art team of penciller Frank Robbins and inker Frank Springer, with Jim Mooney drawing a couple of issues and Don Heck only one. Robbins, born at the end of World War I, was a World War II buff and ensured an accurate recreation of a bygone time, while his kinetic art brought an energy fitting the tense ambiance of the proceedings. Robbins’ style was based on the adventure strips of Milt Caniff,  very far from modern standards and might be a bit hard on the eye for mainstream readers, but his layouts are fluid and show how good a storyteller he was. His choices for the body language of the characters are striking, with Spitfire seemingly dancing throughout the panels instead of running.

Thomas’s scripts are always at least entertaining–and often more. One of the first stories features a group of powerful characters who look like German Norse gods, and Thomas has fun building a network of references to Wagner’s tetralogy–the title is ‘The Ring of the Nebulas’, chapters titles follow the four operas, with the last one being ‘The Twilight of the Star-Gods’. Another story sees the Invaders enter the Warsaw Ghetto, with the superhero quota being filled by a new version of the Golem. Thomas walks a fine line there, with the gaudy-costumed characters right in the middle of a historical tragedy, but his touch is sensitive, highlighting the real horrors of the war as opposed to the fictional suspense of his work.

The Invaders continues with the second volume of reprints.