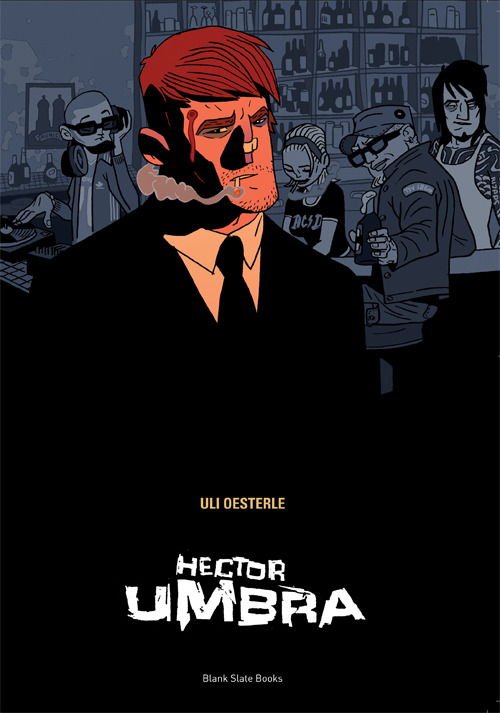 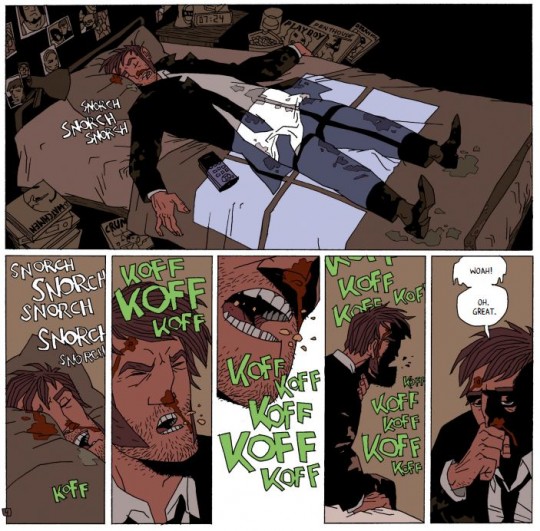 Hector Umbra is a member of Munich’s hiperati, hanging out until the early hours with top DJs and rock stars. This instantly polarises the audience into the envious and those who’ll have his card marked as a poseur, and it doesn’t help that he’s suddenly started painting these bizarre alien beings that have popped into his head.

We hit Hector, though, at a transformative stage of his life. In quick succession one close friend dies and another disappears. Hector hunts around for Osaka with little success until he’s contacted by his dead friend who arranges a meeting in an underworld bar. There’s also been evidence of alien intrusion connected with Osaka and his music, although Hector is unaware of this. He returns from his trip to hell with a wound on his head, his friend’s tooth and a new capacity to see the aliens he’s been painting harassing a man who’s muttering to himself. And just what is it with all those Jehovah’s Witnesses wandering about the place?

Uli Oesterle’s plot unfolds at a leisurely pace to begin with, but by midway through the story he’s throwing in so many bizarre ideas there’s not a clue as to where he’s heading, which is a very good thing indeed. His story constantly shifts genre. As music is fundamental to the unravelling, think of Oesterle’s work as the comics equivalent of a bizarre mash-up, say the Aphex Twin with Taylor Swift or Nine Inch Nails with Carly Rae Jepson.

And follow that through for the art. It’s cartooning, jagged and bent, the cast portrayed from odd angles adding to the unease Oesterle’s script engenders. There are elements of Mike Mignola and Jim Mahfood among others, but it’s very good, and Oesterle’s originality is the creative colouring. It’s flat, worked in black, white and several shades of largely muted colours per scene.

Unfortunately attempting to describe Hector Umbra without revealing the core may deliver the impression that it’s some stream of consciousness rambling, which definitely isn’t the case. Oesterle knows where he’s heading and plays fair with the audience, signposting later events for those who study the art. When reading, take time to stop midway through the climax, say page 185, and consider what’s been set in motion, how daft it is, and Oesterle’s achievement in creating a creeping tension from it.

For all the bizarre qualities this is a supremely imaginative and well-plotted piece of work. It’s funny, it’s touching, it’s tragic and it’s horrifying. It deserves a far wider audience.