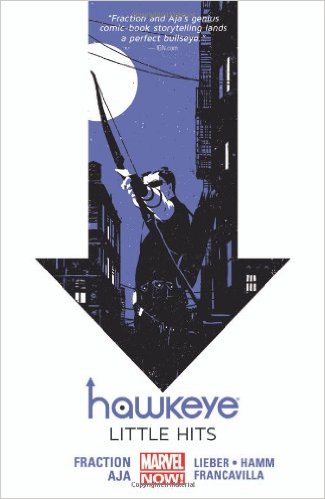 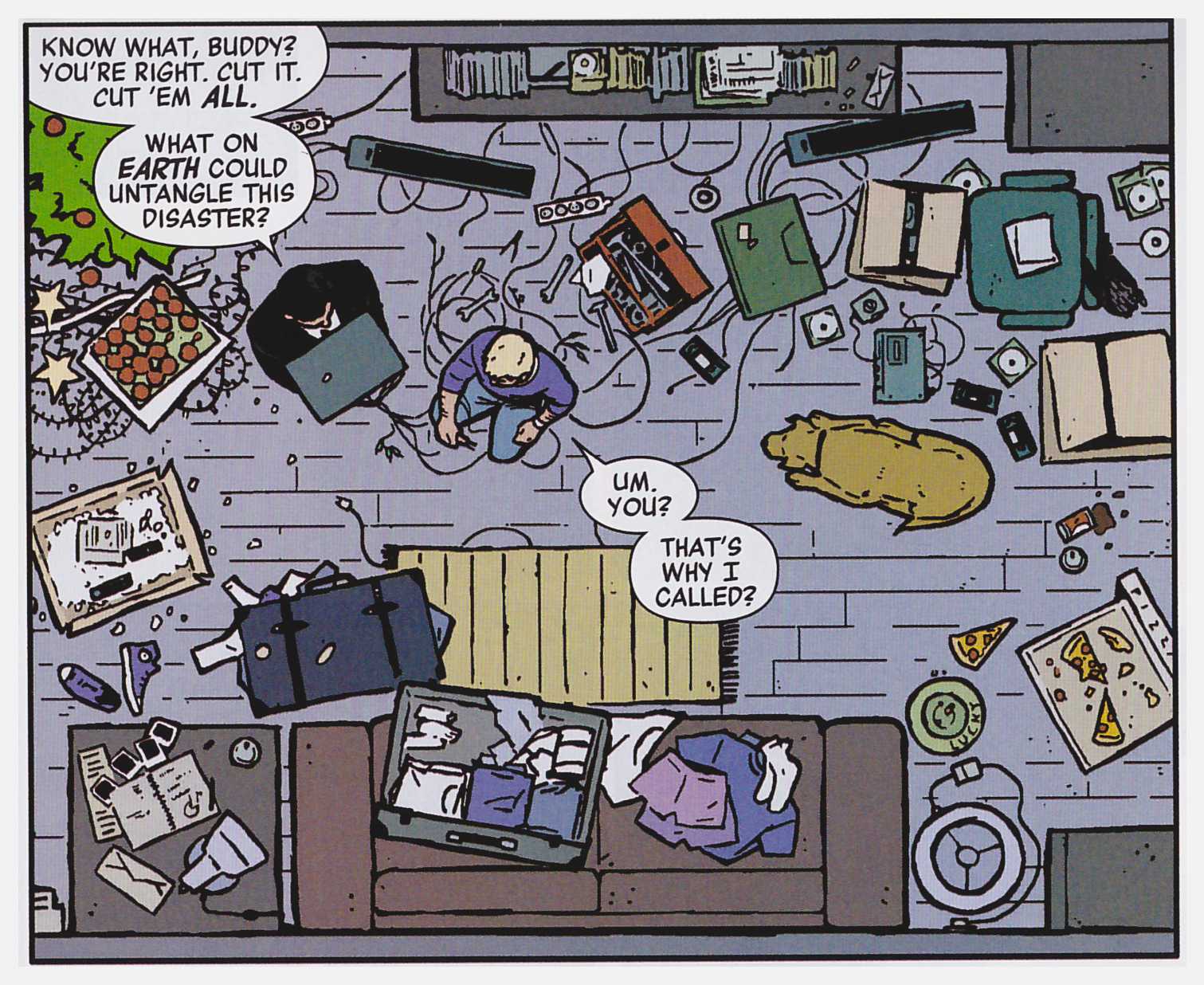 Little Hits proves as entertaining as its predecessor, My Life As A Weapon. The visual inventiveness of the book is refreshing, using ideas as diverse as romance comic cover interludes (supplied by Annie Wu) and pictograms to propel the narrative along unexpected but successful paths. Credit is due to Matt Fraction for the inventiveness employed in telling deceptively simple tales in such original ways, and this praise must be shared equally with his co-creator, David Aja, who brings an eloquence and visual humour to his artistic duties.

Unfortunately, though, Aja isn’t able to draw everything. In a book of consistent excellence, the only inconsistency comes in the art, with Francesco Francavilla illustrating one chapter, and the team of Steve Lieber and Jesse Hamm another. Charming as the stand-ins are, Aja remains the true master of storytelling.

Clint Barton’s life is summed up perfectly through the use of a visual metaphor early in a comically overdramatised scene where he and Tony Stark try to untangle the chaos of wires that link his entertainment centre together. This parallels his tangled relationships, as well as the tangled narrative strands in the book. Barton has a gift for frustrating and alienating the ladies in his life, but, despite his flaws and failings, they remain painfully loyal to him. This is a book about the ties that bind and the surrogate families that we adopt as we travel through life, from our neighbours to the teams that we join. In lesser hands, this could easily slip into soap opera territory but Fraction’s nuanced characterisation and relationships are as gripping as the perfectly judged action sequences. However, despite the wilful complexity crafted, Little Hits never loses sight of its core duty as always entertaining and fun.

Little Hits is bookended by two of the best tales that the series has provided. The first is set during the real life Hurricane Sandy, the royalties for which the creators donated to the hurricane relief effort. The story follows both Hawkeyes, Clint Barton and Kate Bishop, whose sparky banter continues to charm. In parallel narratives, both face the horrors of the storm and both are overwhelmed by it. The magic of the tale is that the heroes turn out to be the regular folk whose humanity, like the Hawkeyes, is inspiring. The final tale stars Barton’s pet, Pizza Dog, and is a truly captivating  feat of storytelling that is worth the price of this book alone as we experience the story through the canine perspective. This anti-shaggy-dog story was to earn Fraction and Aja a much deserved Eisner Award and Harvey Award.

This book can be read standalone but is better appreciated with its companion volumes as part of Fraction’s wider exploration of the absurd life of a vulnerable hero who one character describes perfectly as a “car crash of a man”. Its focus on its hero’s flaws, counterbalanced with his essential decency and morality make it a fascinating read and a joyous antidote to the epic and occasionally pompous storytelling that some comics can provide. Few comics could bring a smile to your face in quite the same way.

The series continues with L.A. Woman, or alternatively the entire series has been collected in hasrdcover as the Hawkeye Omnibus.