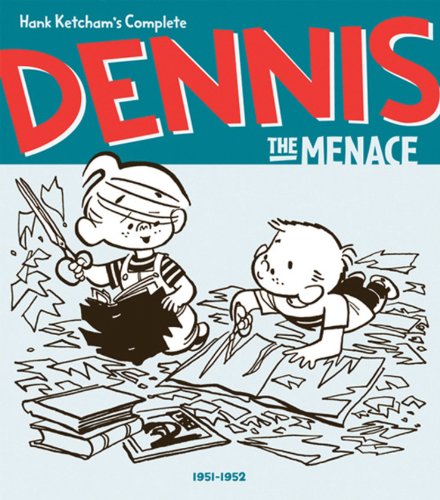 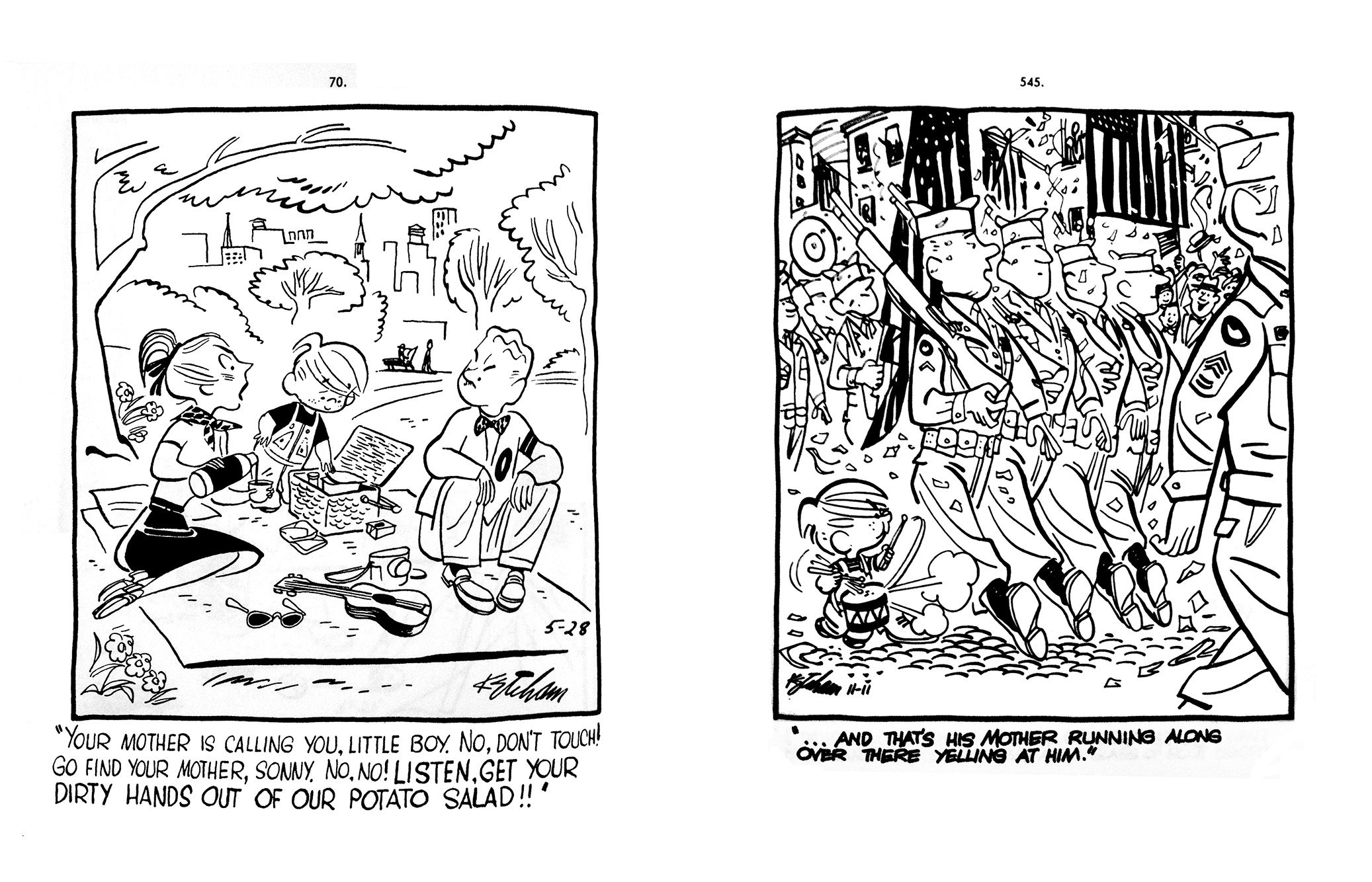 In an incredible coincidence that proves the existence of such a thing as a zeitgeist, two completely unrelated characters both called Dennis the Menace were introduced in The Beano, a weekly comic in the UK and separately in 16 daily newspapers in the USA within one week of each other in March 1951. The two identically-named characters shared the same premise but there were big differences between them in style and execution. The British Dennis was drawn to look dangerous with black spiky hair, a thuggish grin, and wearing a jersey that was striped red and black like a poisonous insect. The American Dennis also wore a striped t-shirt, but he was a cute, snub-nosed little cherub with lots of blonde hair, in sensible overalls. Where the British Dennis planned his pranks and did terrible things because he enjoyed causing trouble, the American Dennis was an uncontrollable, oblivious child who expressed every impulse in the loudest, most inconvenient, most destructive or embarrassing way. There’s enough material for a thesis on these and other differences, from the glamour of the US setting to the fustiness of the UKs – but you get the idea.

Hank Ketcham’s Dennis the Menace was named after his own young son, inspired by his wife’s exasperation with their toddler’s bad behaviour. Ketcham sold the idea as a single-panel cartoon with a caption underneath. He would sometimes break it into two or four panels for storytelling purposes. Ketcham’s mixture of observational cartooning, slapstick and just-cute-enough jokes with superbly composed and intricately designed, beautiful drawing was and still is appealing to both parents and children in different ways. By the end of 1951, Dennis The Menace was appearing in over 100 newspapers in the USA. A live-action TV show began in 1959. At its 1970s peak it was syndicated in over 15,000 papers worldwide, with the usual huge array of merchandise, second only to Charles M. Schulz’s Peanuts in popularity. Unlike Schulz, Ketcham used assistants both on the writing and the drawing of all the spin-off Dennis material, including a Sunday strip, comics and chapter books, and eventually to ‘ghost’ for him on the daily single-panel cartoon.

Volume one of Hank Ketcham’s Complete Dennis the Menace features every single-panel cartoon written and drawn by Hank Ketcham from March 1951 to December 1952, in a thick, square hardcover book almost 600 pages long. It’s introduced with a biography of Ketcham by Brian Walker, and a foreword by Mutts creator, Patrick O’Donnell. The book’s shape is determined by the single panel printed on each page at a generous size, and the images are perfectly reproduced, on crisp white paper that isn’t too thin. In these first two years of Dennis cartoons, Ketcham’s style is softer with none of the graphic experimentation that he would become known for later. Dennis Mitchell, his mother Alice and father Henry are only defined by their roles in generic 1950s gag cartoons peopled by stereotypes. Dennis rarely acts or talks like a real child, but an idealised, Hollywood-scripted imp who says or does whatever is necessary for the punchline of the joke. There are lots of funny and expertly drawn cartoons in this first volume, but it’s very much an artefact of its times. The personalities of the three main characters and Ketcham’s dazzling linework don’t start to evolve until the second volume.

This first volume is also available with volume two, Hank Ketcham’s Complete Dennis the Menace 1953-1954 in a boxed set.