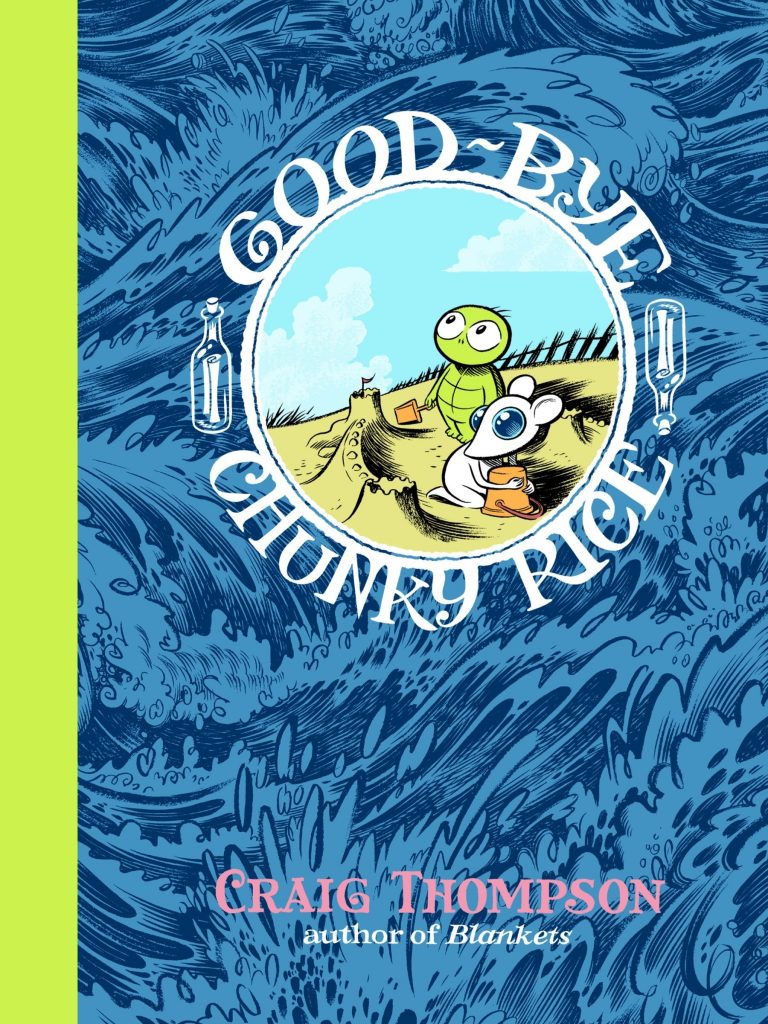 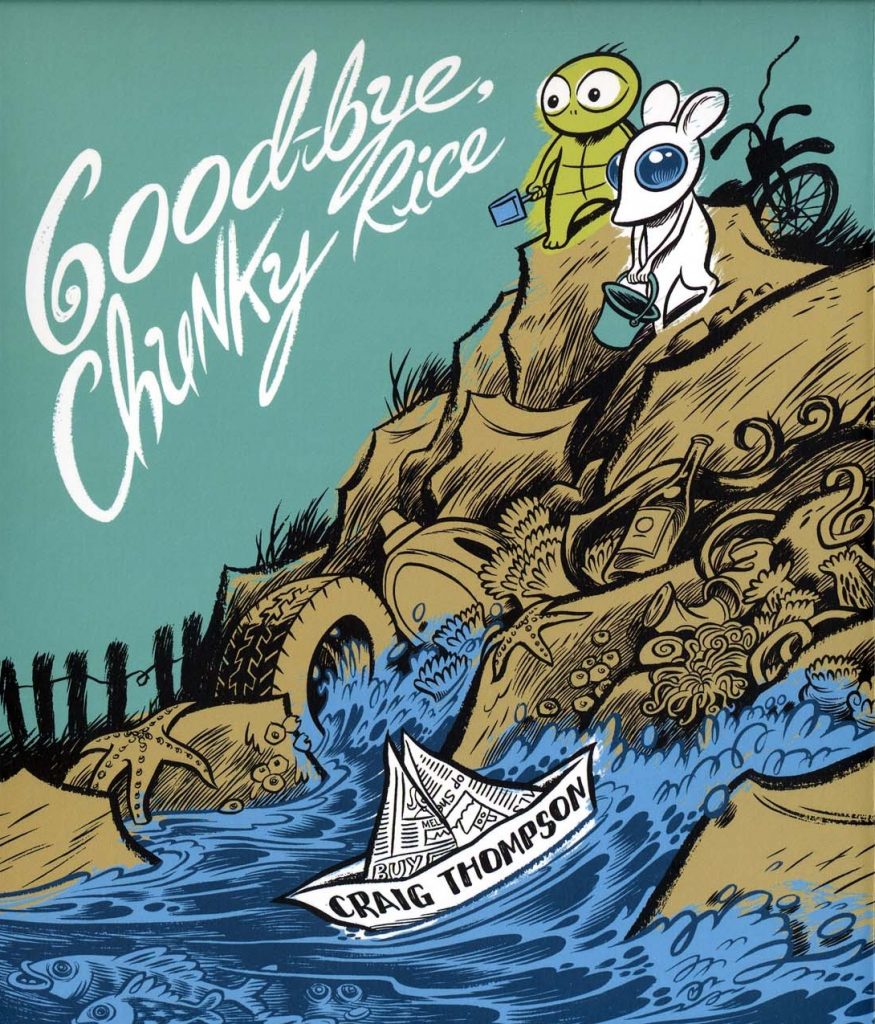 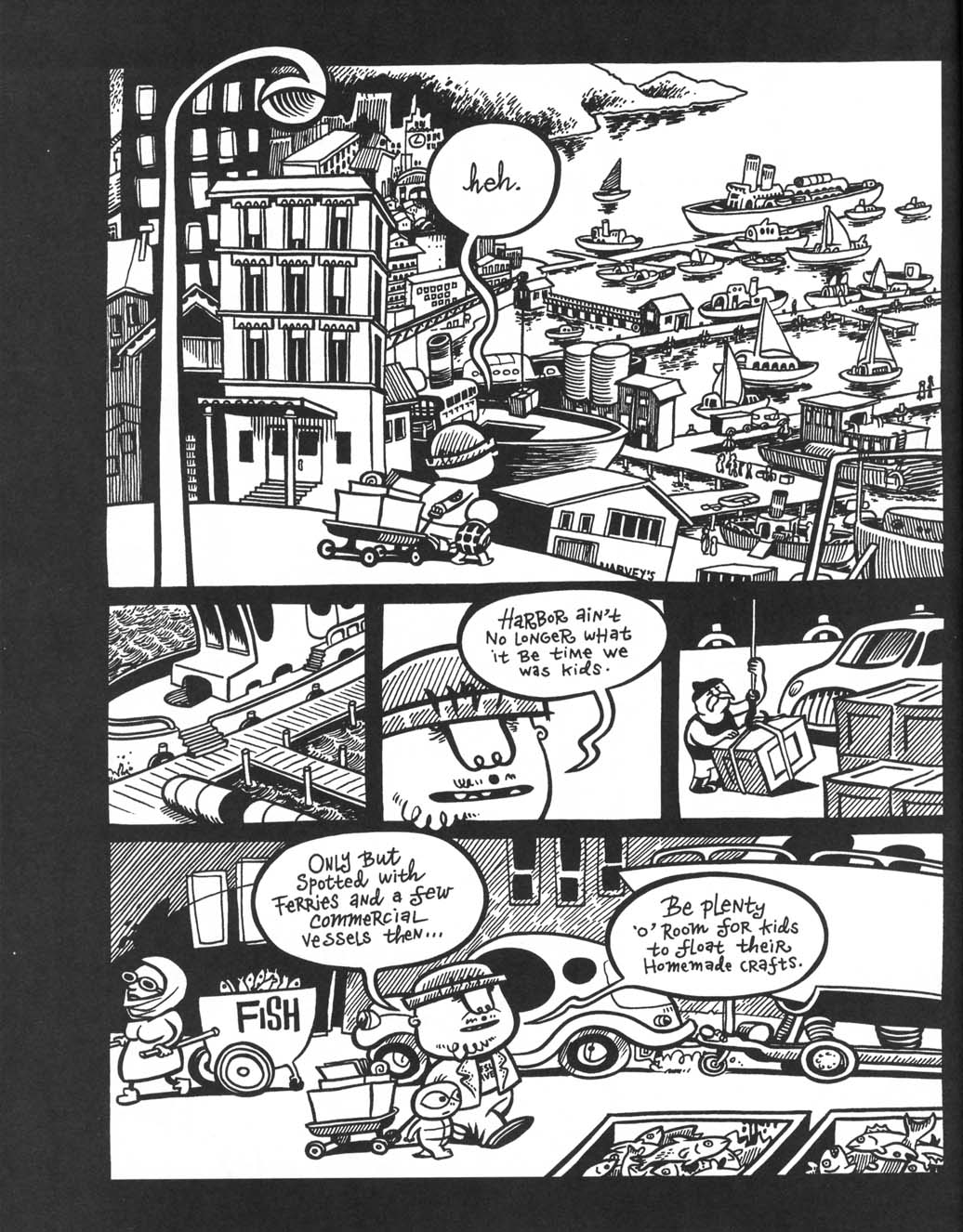 Goodbye Chunky Rice was the graphic novel that first announced Craig Thompson to the world, and now sits among very different bookshelf content. When Thompson first conceived the story there was no market for children’s graphic novels, and now they form a considerable portion of original publisher Top Shelf’s revenue, perhaps the way forward sparked by reprinting Goodbye Chunky Rice four times in four years after publication.

From the opening pages Thompson immediately creates a gentle, comforting and immersive world of cartoon animals and humans living alongside each other, and establishes the friendship between Chunky Rice the turtle and Dandel, the mouse deer. Chunky Rice is the more adventurous, constrained by their small town, but Dandel doesn’t have the courage to accompany her friend when he leaves.

Although marketed from the beginning as a children’s book, Chunky Rice has emotional depth and introspection, with Thompson underlining senses of yearning and absence. There’s a similarity to Metaphrog’s Louis books in that children will respond to the look and feel of the story without necessarily entirely picking up on the undertones. Also like Louis, the language is sometimes complex, and the meandering story has the improvisational quality of jazz music in the way that it works around a theme. Everyone Chunky Rice meets has a story to share, some tragedy in their lives, and we hear it all.

Thompson taps well into the moments of casual cruelty that characterise fairy tales. For all his spirit of adventure Chunky Rice is very passive, and among several heartbreaking scenes the Captain of the boat he’s about to board just discards all Chunky Rice’s possessions. Sinisterly bickering conjoined twins feature, as does a relationship between Chunky Rice’s lonely neighbour and the bird he saves, redemption for a guilty secret.

Thompson’s beautifully rich cartooning carries Goodbye Chunky Rice a long way, with some visual wonder on most pages, but for all the innovation and originality on publication, this requires emotional connection with the sorrowful mood. While some extol the rich atmosphere and vibrant novelty there are others who’ll be left completely cold and find the story dull and formless.