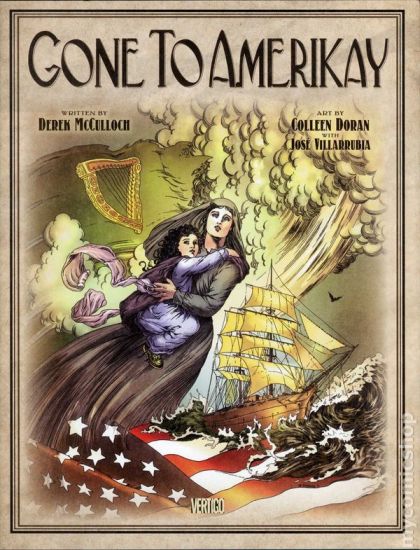 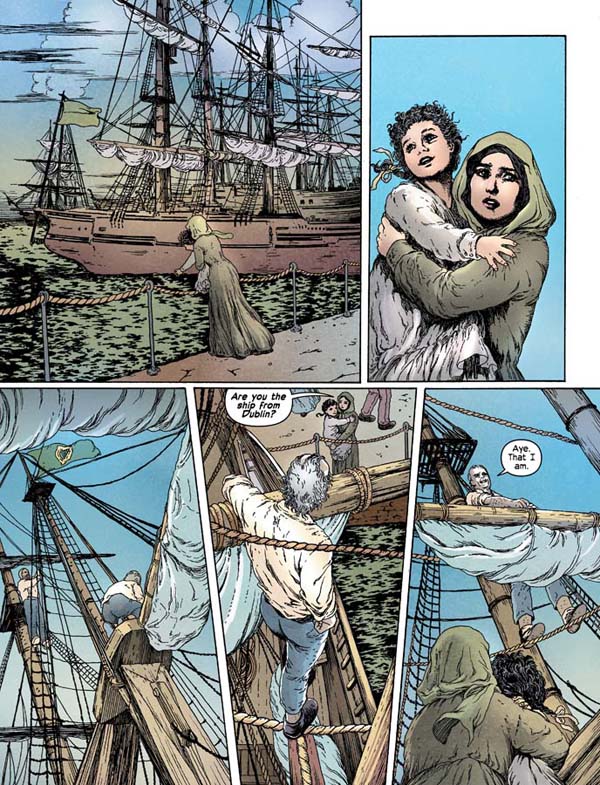 Gone to Amerikay is a graphic novel set in three time periods, telling three, seemingly independent stories. Known for her creator-owned series A Distant Soil, artist Colleen Doran collaborates with writer Derek McCulloch on these tales of Irish immigrants to the USA.

In 1870, Ciara O’Dwyer and her baby daughter Maire arrive in America, discovering the reality of poverty in the country of their dreams, as they await the coming of their husband and father. In 1960, young acting hopeful Johnny McCormack drinks his first drink in an American bar where his friend Brian Fritzgerald works, welcoming him with open arms. And in 2010, rich businessman Lewis Healy flies to New York, his wife Sophie about to provide the solution to a mystery he’d been chasing for a long time. A mystery named Ciara, which will link all the characters together.

Drawing stories in three different centuries is no small feat, and Doran shows once again that she’s one of the most versatile artists working nowadays. Her style here is highly illustrative, with a particular care given to clothes, buildings and all the markers of a specific period. Her characters look like real people, with lived-in faces and a developed body language. José Villarrubia’s colours are stunning, as detailed and evocative as Doran’s art, complementing it to give the reader a fully-realised recreation of three different periods of New York.

McCulloch’s writing is dense and rewards multiple readings. The whole book has a careful structure, with numerous references to historical characters and events, as well as prominent use of Irish folk songs (see here for references by the writer). It’s very interesting how McCulloch and Doran integrate music and singing in a silent medium, McCulloch seeming very taken with songs and comics, as his previous graphic novel Stagger Lee proves. No fancy effects here, just the faces of singers, both at home and on stage, singing their hearts out.

The characters of Gone to Amerikay face various hardships in their new life: poverty, homophobia, racism… These issues are never the only trait applied to each character, though. They’re integrated into a larger whole, as each life is integrated into the history of the time. Indeed, integration of apparently disparate elements is one of the strengths of this graphic novel. Ciara is not only about being a woman without a husband, and gay characters are not only about being gay in an unsympathetic world. A good example of integration is the use of the song Strange Fruit as an anti-gay slur, McCulloch making a subtle connection between racism and homophobia.

Gone to Amerikay is a graphic novel recommended both to seasoned readers who appreciate superior storytelling and to casual readers who are looking for a literary experience.