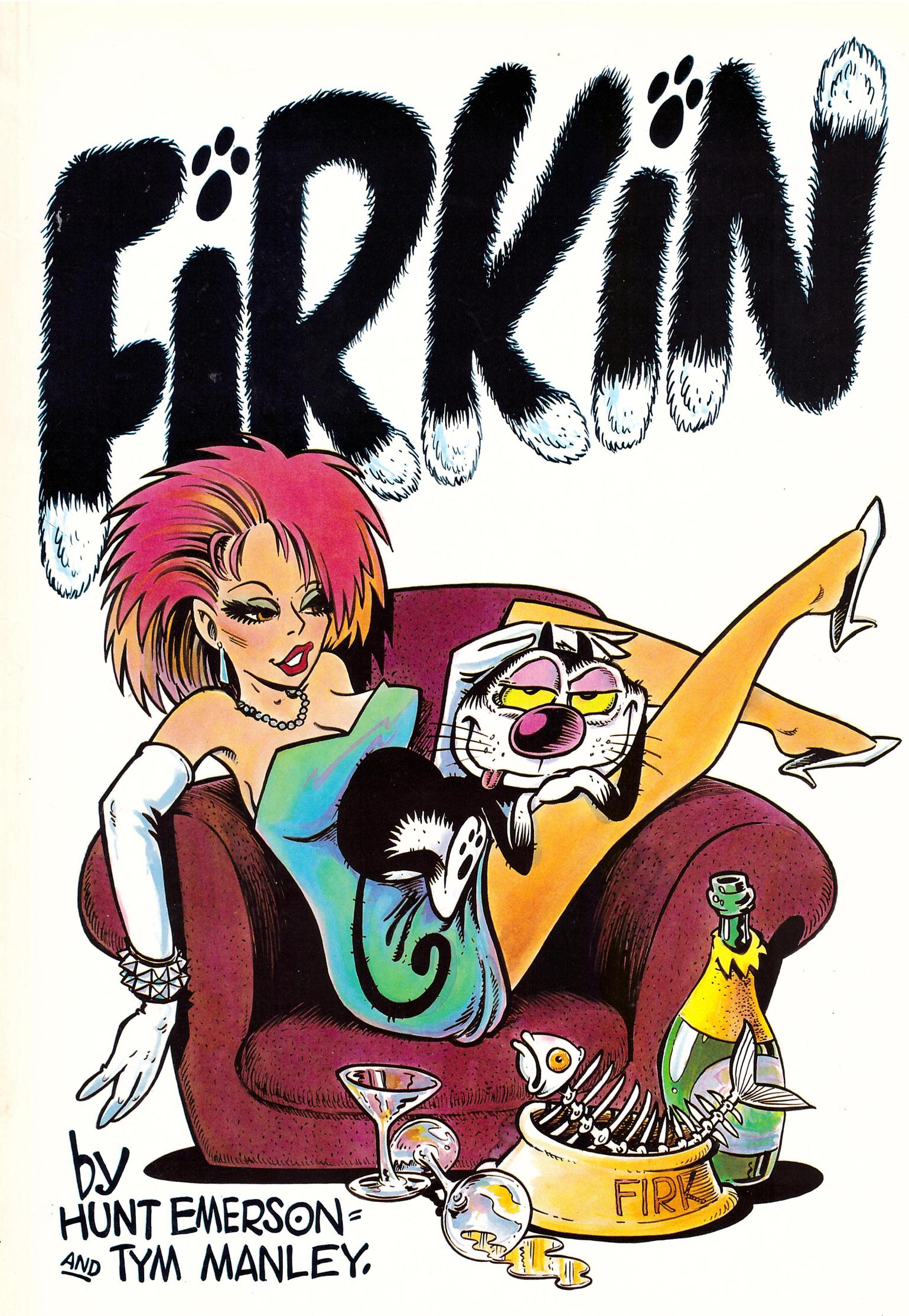 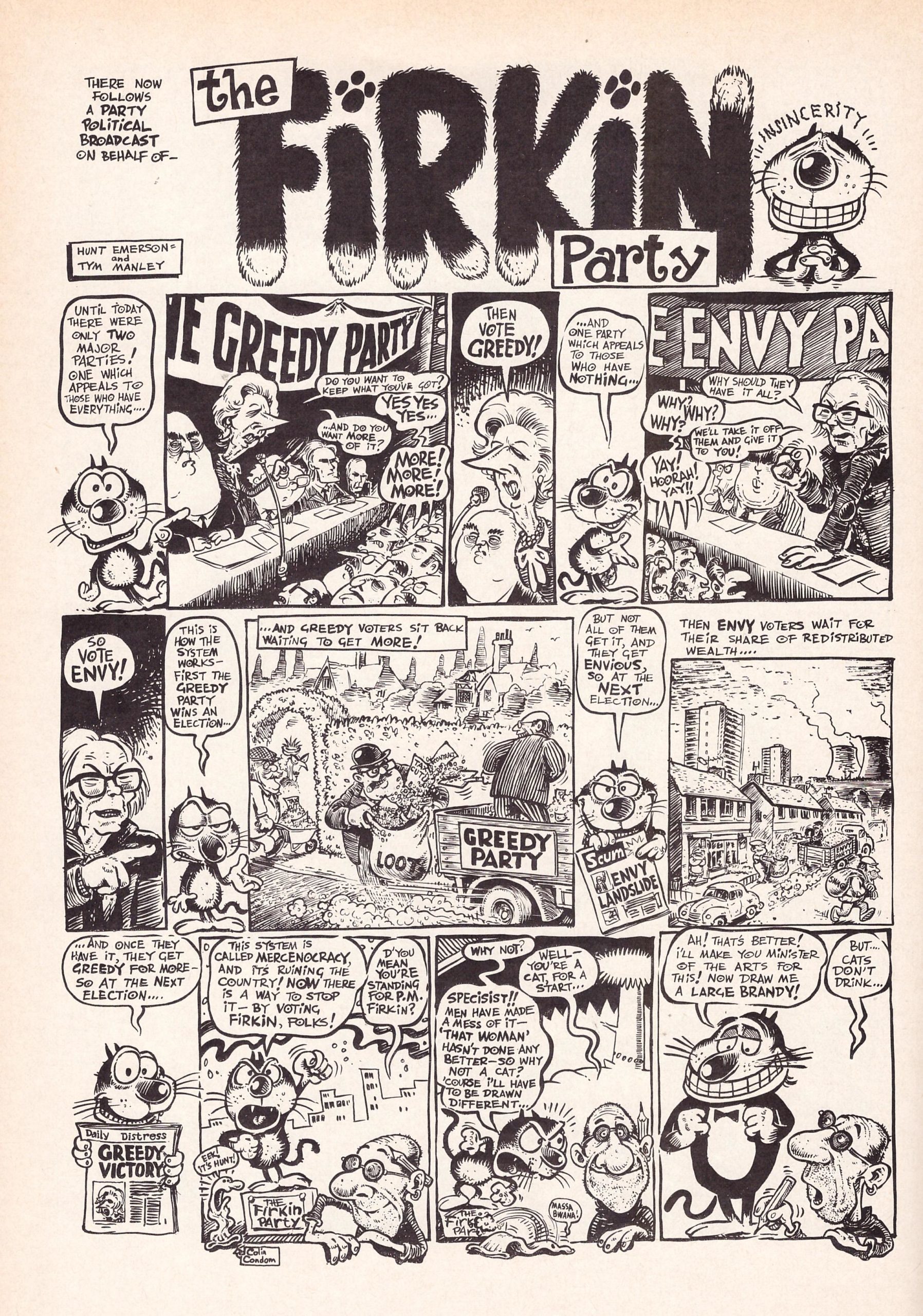 It now seems a quaint idea that magazines whose sole purpose was presenting pictures of naked women courted a form of respectability via articles and cartoon strips. Harvey Kurtzman, Will Elder and Ron Embleton among others have reason to be thankful, paid premium rates for their satirical strips also featuring attractive naked women. Fiesta, however, wasn’t Playboy or Penthouse, it was cheaper, more basic, and with no pretence of being respectable, one of the strips here explaining how in 1971 it was the first British magazine to show pubic hair. Decide for yourself what kind of landmark you consider that to be. However, probably in common with its upmarket rivals, as long as the cartoon strips featured naked women, creators Tym Manley and Hunt Emerson were pretty well left to their own devices.

Firkin is a book where the cover does tell the story. The symbolism of an attractive, glammed-up woman stroking her pussy is comparatively subtle when set against the parade of copulation, spread vulvas, breast and erection substitutes (the genuine article off limits in the early 1980s). However, Manley and Emerson being left to their own devices results in a strip actually biting the hand that feeds. Time and again these very funny strips subvert the idea of glamorised sex as their sardonic cat ridicules the fantasies presented throughout the remainder of Fiesta. Of course, this collection is removed from the context, but still stands well alone in debunking sex. The premise is that cats get everywhere and see everything, breeding an awareness of human sexual foibles, and Firkin explains/ridicules them all. It gives Emerson a glorious venue to let his natural cartooning exaggeration flourish, and he draws hell out of these strips. His depiction of plain people engaged in what we usually see in glamorised form is funny, and often steps up to hilarious, Firkin examining sex toys a monument to excess, and there’s not a guy who won’t cringe at the genuine efforts at penis enlargement from around the world.

Manley is ideally matched with Emerson, both possessing a refined sense of the absurd. At the time employed in an environment where sex was reduced to commodity he channelled insider knowledge into consistently inventive scripts, yet he’s even more impressive when he lets his imagination fly. A strip considering what the world would be like if men were coy about sex is a neat reversal, how to have enough sex in today’s busy world surreal, and frequent visits are made to the difference between imagination and reality. It’s best exemplified in a couple of strips about the generation gap. Six pages of dense James Bond pastiche in ‘Supercat’ is a misfire, but it’s one of very few, and immediately followed by the uproarious fate of the unfortunate Harry when his wife picks up a sexual self-help manual.

While the spirit of these strips is understanding, be warned they occasionally employ the offensive terminology of an earlier era, and even Emerson seems taken aback by an off colour wife joke, intruding into the strip to note it wasn’t his idea. A second Firkin collection was published by Knockabout in 2002, picking up with strips from the mid-1990s. 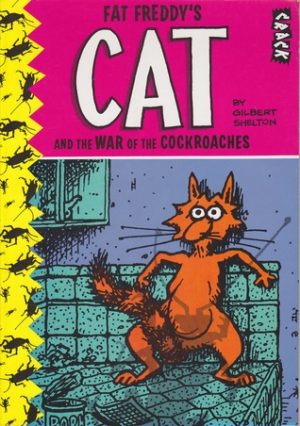 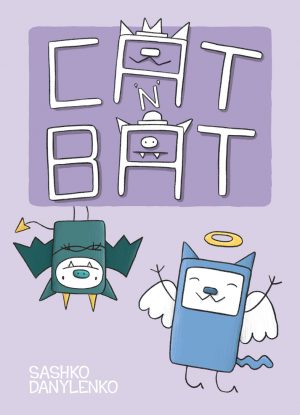 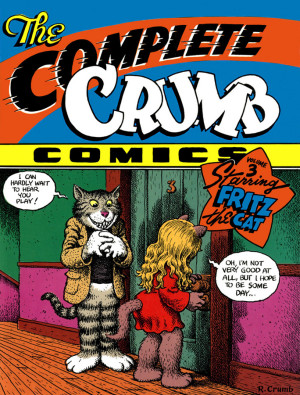 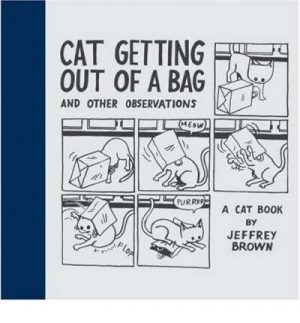