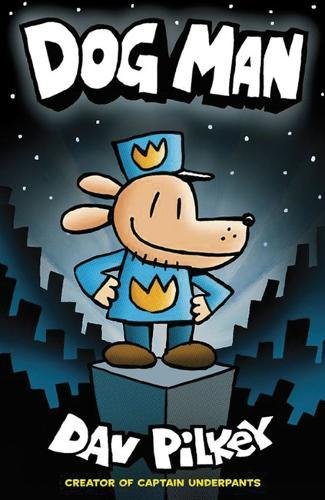 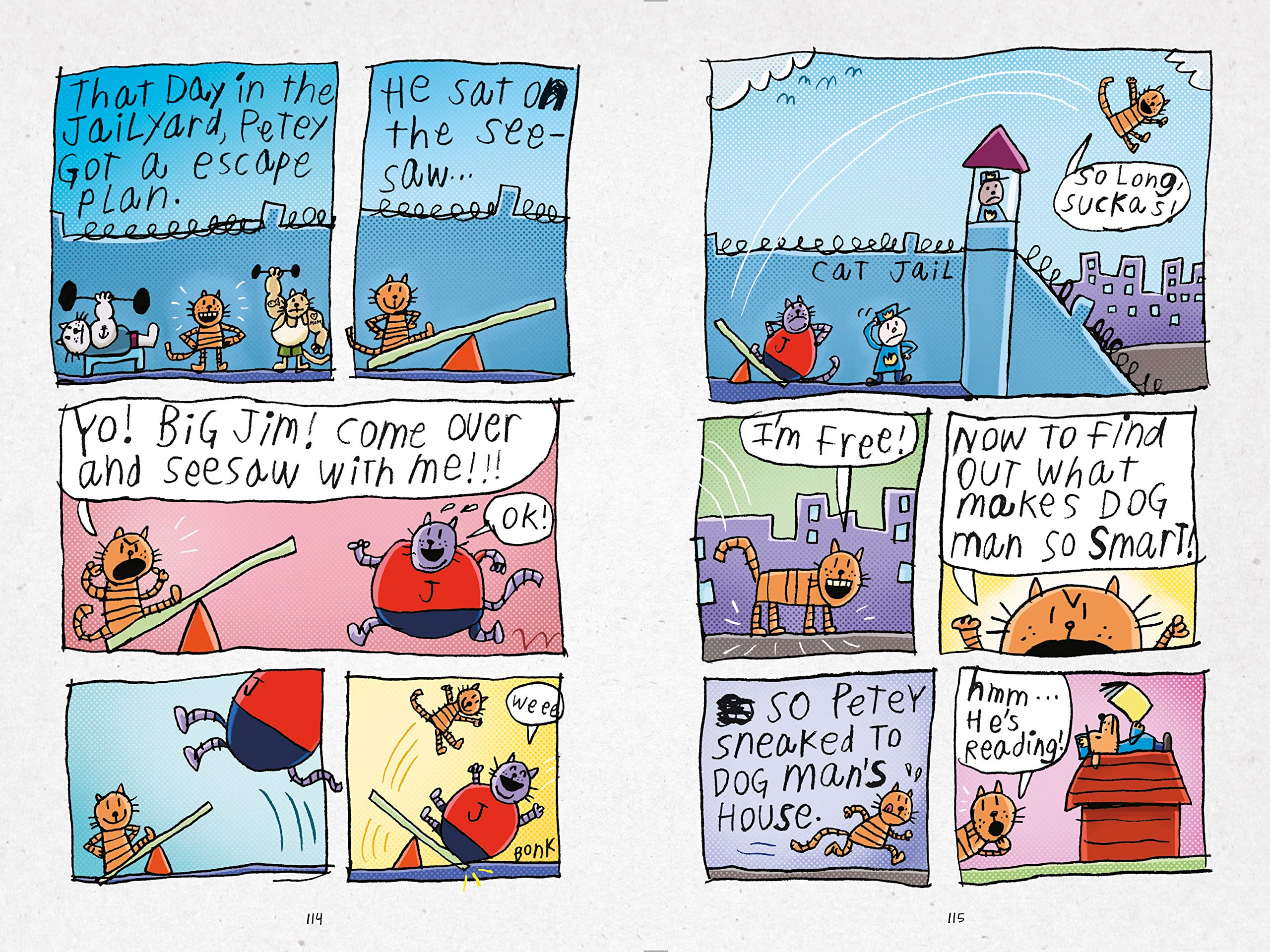 Dav Pilkey is the writer and artist of Captain Underpants, a series combining text, illustrations and comics for younger readers featuring two young boys George and Harold. They are non-stop jokers and pranksters, always in trouble with Mr Krupp, their school principal. He especially dislikes the comics they make together, the worst of which stars their invented hero Captain Underpants, a bald man who fights crime wearing nothing except a red cape and some very large, white y-front underpants. To prevent Mr Krupp punishing them especially harshly after some very big shenanigans, the boys manage to escape by hypnotising him into believing he is Captain Underpants himself. Hijinks, action and adventures ensue.

Each Captain Underpants is a chapter book with text and illustrations but they also contain comic strips, which are George and Harold’s own stories, drawn in shaky kid pictures with mis-spelled speech balloons. The layers of conceptually meta story-within-a-story jokes in these books are probably Dav Pilkey’s strongest gimmick, and his genius masterstroke is to extract George and Harold’s comics and present them in a stand-alone book which we can buy as a real-world artefact.

Dog Man is written and drawn to look like it was made by children, with wonky panels, shaky and basic drawings, lots of bad grammar, crossed-out words and mistakes. It’s introduced by George and Harold breaking the fourth wall and talking directly to readers, explaining how they invented their hero before handing the finished book to us to read for ourselves, starting with ‘Dog Man Chapter 1: A  hero is unleashed’.

Police officer Knight and his police dog Greg are blown up by a bomb made by Petey, a very bad orange cat and the main villain in this book. Knight’s head and Greg’s body can’t be saved, so the doctors sew Greg’s dog head onto Knight’s human body and ‘soon, a brand new crime-fighting sensation’ is born: Dog Man, ‘the world’s greatest cop’. Although he has a human body, Dog Man is still basically a dog, so much of the humour in the following four stories comes from his behaving like any dog and annoying his boss, the chief of police, by lying on the couch in his office and getting dog hairs on it, inappropriate licking, and pooping in the wrong places. The inevitable kid-pleasing toilet humour is actually relatively harmless, and the jokes that arise from Dog Man using his canine powers to defeat Petey are well designed with plots that escalate in nicely silly ways.

Dog Man’s self-aware construction and pun-filled, nonsensical slapstick style makes for a very entertaining book with great appeal for children starting to read for themselves. Some parents who are concerned with educational and ‘worthy’ content for young minds have a hard time getting past all the deliberate errors, crossings out and wrongly spelled words that litter the text. But these misgivings have had no effect on sales, with each of the nine books in the Dog Man series selling more than the previous one. Dav Pilkey’s books are all New York Times best sellers, occupying the top spots on the list for weeks at a time ever since the incredible success of Captain Underpants with more than 80 million copies in print worldwide in 28 languages, a staggering figure for the output of just one man. The initial print run for the latest Dog Man book is five million copies!

Next in the Dog Man series is Dog Man Unleashed.