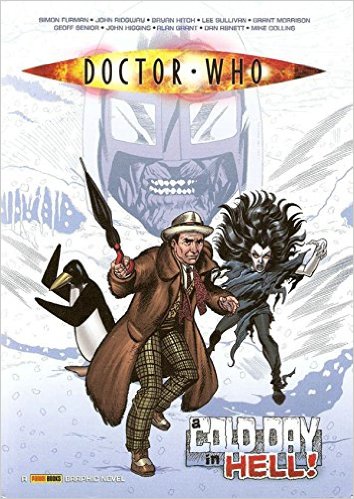 It’s surely the case that outside his immediate family Sylvester McCoy’s overly eccentric interpretation of Doctor Who is no-one’s favourite. He was, after all, the man that killed the franchise after twenty five years. This, then was the handicap faced by the veritable army of creators producing stories featuring his version for the contemporary Doctor Who Magazine, reprinted in this collection.

The biggest surprise is coming across a collaboration between Grant Morrison and Bryan Hitch both early in their careers. Despite noting “I’d rather people burned my early work”, Hitch is accomplished at seventeen, while lines like “The electric fog of our syntelligence is alive with the raw mathematics of fear” tell you this isn’t a Simon Furman story.

This is no slight on Furman, who writes around a third of the book. His longest piece returns the Ice Warriors, well-designed foes who’d not been seen on TV for over a decade at the point, but his best is the charming ‘Keepsake’, nicely drawn by John Higgins. Mike Collins and Kev Hopgood supply a piece set around the Great Exhibition of 1851.

John Freeman’s ‘Planet of the Dead’ highlights what the comic version of Doctor Who could achieve not then in the realms of possibility for the TV show. It unites the first seven Doctors, one of whom was dead by then even had the show’s budget stretched that far, plus all his previous assistants. It’s a fun romp that’s also the introduction of a Doctor Who stalwart artist in Lee Sullivan.

Dan Abnett, Dougie Braithwaite, Alan Grant and John Ridgway are among the better known creators also contributing here, to what’s a diverting, but not compelling collection. One trivial item of interest is the Doctor meeting other Marvel UK characters such as Death’s Head and the Sleeze Brothers, something the licensors would surely forbid these days. A second collection of material featuring Sylvester McCoy’s likeness was eventually issued as Nemesis of the Daleks.

As with their other Doctor Who collections, Panini’s back-up material is exemplary. There’s an introduction from Richard Starkings, the original editor of most of this material, explaining some of his decisions at the time, and the back pages gather up the recollections of assorted creators on their Doctor Who contributions here.