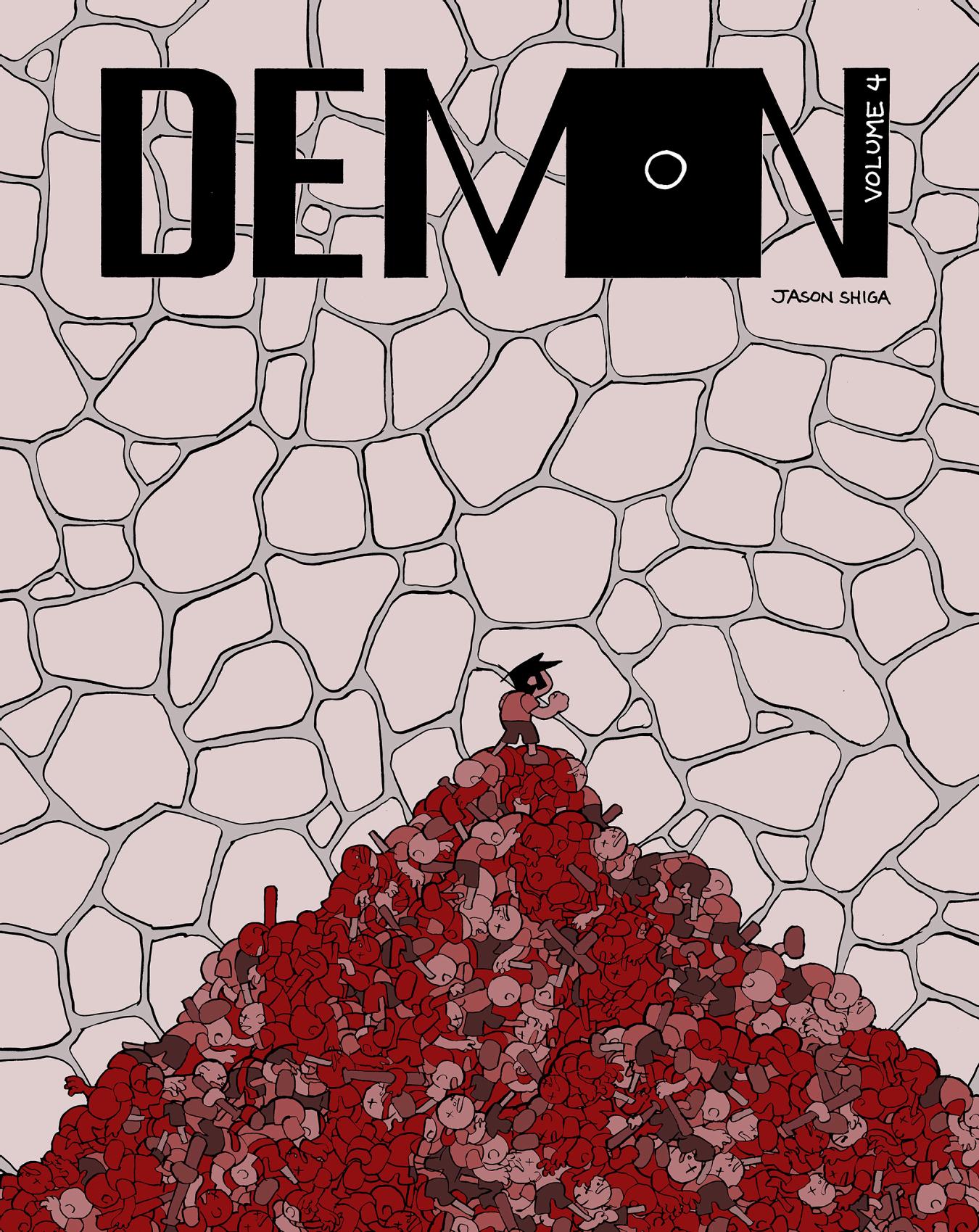 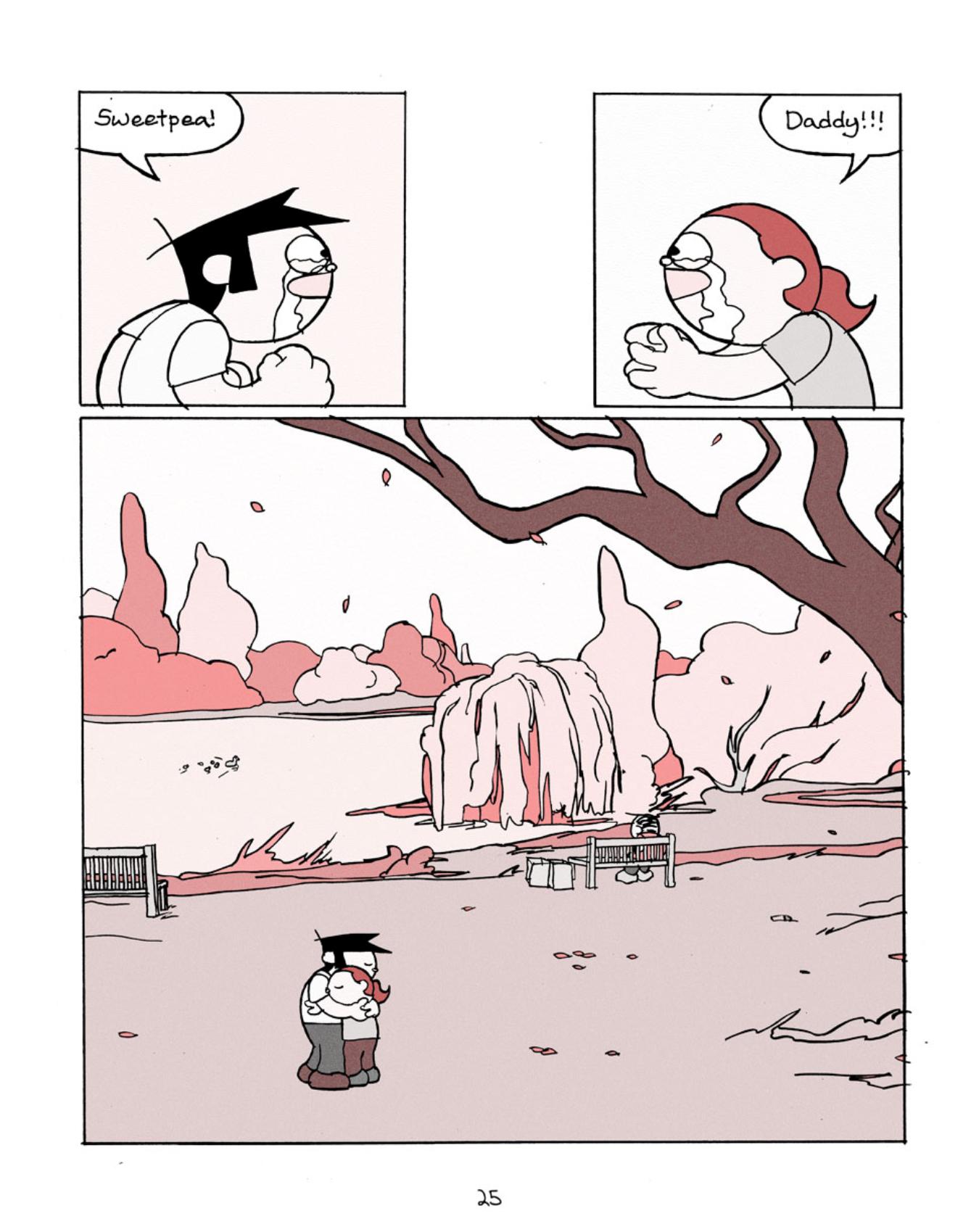 Surely no-one has come this far without knowing the basic premise of Demon, but if you don’t want to know, read no further, just be aware that Jason Shiga doesn’t let anyone down with his conclusion.

Demon has been characterised by a headlong rush from the opening volume. Once Jimmy discovered what he could do, the pace has rarely slowed down as he’s transferred his essence from one body to another. He is the demon of the title, a man lacking any remorse in taking over someone else’s body, effectively ending their life, a deal he seals by killing the body when he wants to move elsewhere. It’s a trait never really explained, although the process is, and inherited by his daughter. It looked a little tricky for Jimmy at the end of volume 3, but as can be seen by sample art, there is a reunion, and it’s joyful.

The problem for both Jimmy and his daughter is that there’s someone with whom they’ve had several encounters over the decades, determined to wipe them out. As the book begins he considers they’re both dead, so they decide to lie low, but that doesn’t last, as they’re aware of a plan to take control of the world.

It’s unlikely that anyone will be starting the series with this graphic novel, but if so, there’s little in the way of concessions from Shiga. No footnotes or back of the book explanations, so when Jimmy begins plotting how to change reality, it won’t make sense to novice readers. In isolation it’s hilariously nutty – 500 former Navy Seals with one leg amputated and 200 pairs of conjoined twins? – but it’s an indication as to the depth of thought Shiga’s applied to the uses and limitations of being able to kill oneself, but then possess the nearest living human. And if you think the Navy Seals and conjoined twins are nuts, just wait until Shiga sets his plan in action. It’s like an insane version of a primitive computer game, a sensation highlighted by Shiga’s simple, blocky cartooning. That’s just as well considering how gruesome the content would be if rendered realistically. The distancing technique is for the best.

So has Shiga kept the promise of his first volume introduction and ensured the circumstances keep escalating until the end. Yes, he has. On several occasions here you’ll be scratching your head attempting to figure out just what Jimmy’s next step will be given his predicament, and every time Shiga comes up trumps as the final action sequences live up to expectations. There’s a weird, downbeat and philosophical ending rather at odds with the remainder of what Shiga’s produced, as the questioning process would surely have occurred long beforehand. Never mind, suck it up as it leads to an interesting final page that is in keeping.

From start to finish Shiga has backed his plot into seemingly impossible corners, and has extricated himself brilliantly every time. In its entirety Demon is stronger than the sum of its parts, just begging to be read as one continuous adrenaline rush, and with this concluding volume that’s now possible. Great. 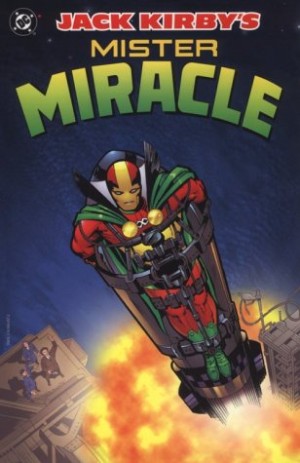